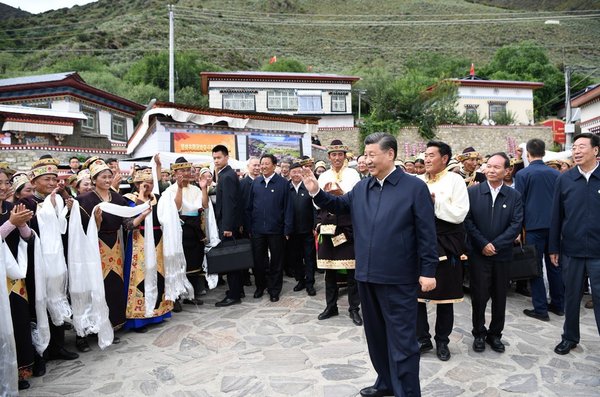 LHASA, July 23 (Xinhua) — Chinese leader Xi Jinping has stressed fully implementing the guidelines of the Communist Party of China (CPC) for governing Tibet in a new era and writing a new chapter of lasting stability and high-quality development for the plateau region.

Xi, general secretary of the CPC Central Committee, Chinese president and chairman of the Central Military Commission, visited the Tibet Autonomous Region from Wednesday to Friday for the 70th anniversary of Tibet's peaceful liberation, the first time in the history of the Party and the country.

Xi extended congratulations to the 70th anniversary of Tibet's peaceful liberation, visited officials and ordinary people of various ethnic groups and conveyed the CPC Central Committee's care to them.

Xi said over the past 70 years Tibet has made historic strides in the social system and realized full economic and social development, with people's living standards significantly improved.

"It has been proven that without the CPC, there would have been neither new China nor new Tibet," Xi said. "The CPC Central Committee's guidelines and policies concerning Tibet work are completely correct." 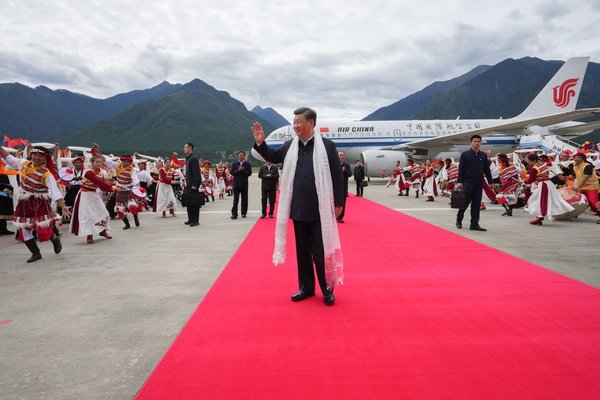 On Wednesday, Xi arrived at the Nyingchi Mainling Airport and went to the Nyang River Bridge, where he learned about the ecological preservation of the Yarlung Zangbo River and its tributary Nyang, as well as the construction of nature reserves. Xi underscored the importance of protecting and restoring the ecology of major river basins.

During a visit to the city planning hall of Nyingchi, Xi called for scientifically delineating the boundaries of urban development and drawing the red lines for protecting ecosystems.

In the village of Galai, Xi went to the home of Dawa Gyaltsen and chatted with the family in the living room.

Xi said the village epitomizes the economic and social achievements Tibet has made over 70 years since its peaceful liberation. He also hailed the village as a model of ethnic unity.

Xi later visited a city park in Nyingchi where he greeted dancing locals and tourists.

On Thursday, Xi went to Nyingchi Railway Station, learning about the overall design of the Sichuan-Tibet Railway and how the Lhasa-Nyingchi section has been operated since June 25. Aboard a train to regional capital Lhasa, Xi inspected the construction along the railway. He hailed the railway as a major move to boost Tibet's development and improve people's living standards.

On Thursday afternoon, Xi went to the Drepung Monastery located in the western suburbs of Lhasa. Xi acknowledged the contributions the monastery has made in upholding the leadership of the CPC, supporting the socialist system and safeguarding national unity.

Xi stressed fully implementing the Party's fundamental guidelines governing religious work, respecting the religious beliefs of the people, adhering to the principle of independence and self-governance in religious affairs.

He also stressed governing religious affairs in accordance with the law and guiding Tibetan Buddhism to adapt to a socialist society. 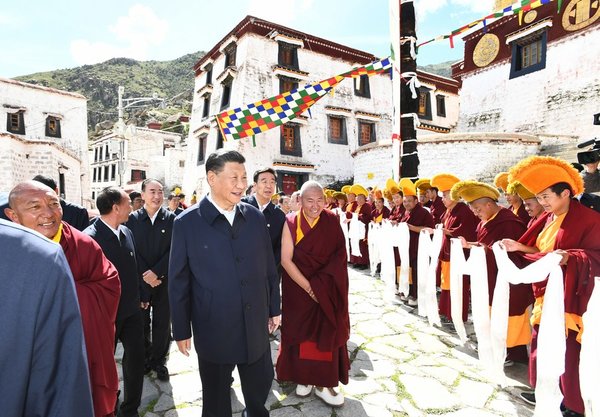 At Lhasa's Barkhor Street, Xi visited shops and learned about the development of tourism and cultural industries, as well as the preservation of Tibetan culture. On the street, people of various ethnic groups greeted Xi, who waved back.

At the Potala Palace square, Xi inquired about the protection and management of the palace, and he was also greeted by people of various ethnic groups at the square.

Xi said people of all ethnic groups had jointly contributed to the development of Tibet and written the history of Tibet. Through its course, the history provided ample examples of exchanges between Tibetan and other ethnic groups.

He said that at present, Tibet is at a new historical starting point of its development, and the Party's leadership must be upheld and the path of socialism with Chinese characteristics must be followed.

On Friday morning, after hearing the reports of the Party committee and government of Tibet Autonomous Region on their work, Xi acknowledged the achievements the region has made in various fields and stressed efforts to strengthen social governance and ensure national security, social stability, and people's well-being.

The publicity and education work of building public awareness of ethnic unity and progress should be combined with the education work concerning core socialist values, patriotism, anti-secessionism, history, and Marxist concepts, Xi said.

He called for strengthening exchanges and interactions among ethnic groups, as well as building a stronger sense of identification with the country, the Chinese nation, the Chinese culture, the CPC, and socialism with Chinese characteristics.

Xi said development in all sectors should serve ethnic unity and progress, and should help improve people's livelihood and build consensus.

Stressing deepening reform and opening up, Xi said the building of major infrastructure including railways and roads should be accelerated.

He also noted the development of distinctive industries, the building of national bases for clean energy, and coordination between development and security.

Xi said the achievements made in poverty alleviation should be consolidated and expanded, in coordination with the extensive drive for rural vitalization.

Xi noted that the ecological environment in Tibet should be well protected, stressing that snow and ice, comparable to green mountains and clear water, are also valuable assets that represent true wealth.

The earth's third pole should be well safeguarded, Xi said.

Xi also urged efforts to guide Party members and officials to combine the learning of Party history with their work.

On Friday, Xi met with representatives of troops stationed in Tibet, calling for efforts to strengthen military training and preparedness in all aspects and make contributions to the lasting stability, prosperity and development of Tibet.

During the inspection in Tibet, Xi learned that an extremely heavy rainstorm had hit the central province of Henan. He instructed swift and all-out rescue efforts to save lives and property. He ordered the military and armed police to assist in the disaster relief, and all relevant ministries and departments to coordinate their work.

Xi also asked Tibet to beef up efforts to prevent and cope with natural disasters.