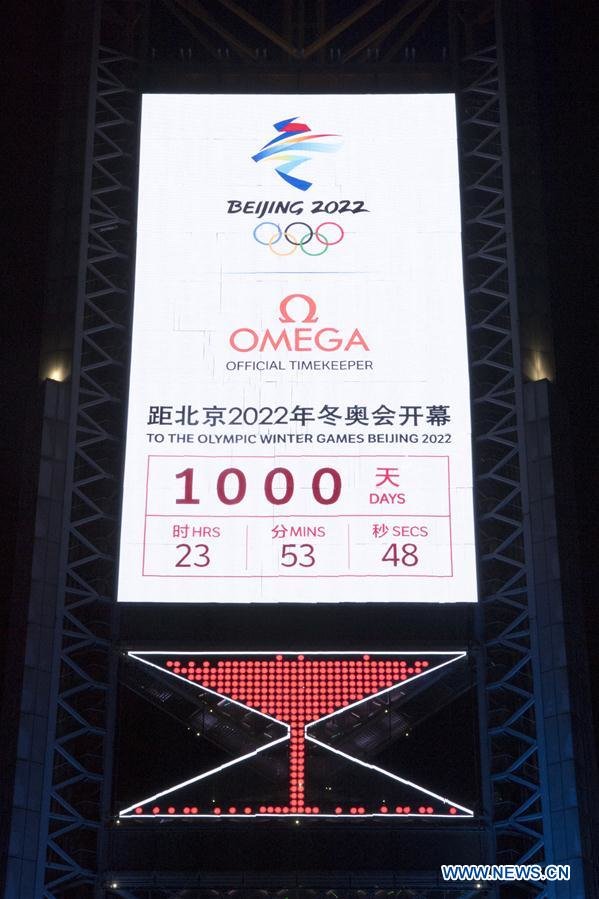 Over 10 years since the 2008 Olympic Games, Beijing's iconic Olympic Park was under the spotlight again Friday evening as the '1000-Day-to-Go' countdown ceremony got under way to mark the milestone of the Beijing 2022 Olympic Winter Games.

The 1000 square meters LED countdown timer was installed between the fourth and seventh floors of the Olympic Park's Linglong Tower from now until 2022. An important legacy venue from the Beijing 2008 Summer Olympic Games, the tower's three-sided glass and steel design has since ensured its status as an instantly recognizable local landmark. Situated close to the Olympic Cauldron at the northwest side of the Bird's Nest, the 128-meter tower is one of the Olympic Park's tallest structures, allowing it to be seen from nearby buildings, stadiums and major surrounding roads.

Mayor of Beijing Chen Jining said the preparations of Beijing 2022 proceed smoothly on all fronts. "The construction of venues and infrastructure is accelerated, the organization of the competition events and the services for the Games are promoted solidly, the marketing program is keeping a sound momentum and the winter sports are becoming popular."

"With the eyes of the world now focusing on China as the next hosts of the Olympic Winter Games, 2019 is a decisive year for the preparations of the Olympic Winter Games Beijing 2022. We are very pleased to see Beijing 2022 has made strong progress in these preparations, especially the role they are playing in China's ambitious plans to engage 300 million people with winter sports," he said.

Beijing 2022's Olympic and Paralympic Games Volunteer Service Action Plan was also launched at the ceremony. Games volunteers from around the world will have a unique opportunity to provide support in a number of areas, including spectator guidance, competition operation and media operation. They will be deployed in various locations throughout Beijing, Zhangjiakou and Yanqing, including competition venues and the Athletes' Villages.

Announcing the Volunteer Service Action Plan, Zhang Jiandong said he looked forward to Beijing 2022 uniting the wisdom of volunteers from all over the world so they can work together in helping to deliver an 'excellent, extraordinary and outstanding' Winter Games in 2022.

Beijing 2022's Global Volunteer Recruitment will officially launch in December 2019. More information will be announced over the coming months.