Editor's note: Since returning to China in 1999, the Macao Special Administrative Region has undergone its fastest growth period ever and the bond with the Chinese mainland increasingly closer. As December 20, the day that marks the 20th anniversary of Macao's return to the motherland, approaches, we invited several Macao students in their twenties who pursue higher education in Beijing to share their memories, experiences and feelings as they grow with their hometown.

"Zhuhai, a neighboring coastal city of Macao, is the first Chinese mainland city I visited. I was a young child then. On passing through customs, I was impressed by the broad two-way road in sight. Back in Macao, you can barely see the sky because of the narrow streets, dense buildings and crowds of people," Wong Cheok Wai, a junior from Macao and a student at Capital Normal University in Beijing, recalled.

"In high school, I got an opportunity to study Mandarin at a mainland college. During the 20 days there, I visited the Palace Museum and the Great Wall for the first time and it was a totally fresh experience for me. I felt rich Chinese culture and history was near at hand. So I made up my mind to go to college in Beijing after the trip," Wong said.

"When I first blended in with Chinese mainland students, I found multiple mobile apps provided great life conveniences, like ride-hailing app Didi and food delivery app Meituan. The infrastructure here, like sprawling subways, is well built," said Ho Chak Hang, who participated in the same study tour with Wong. He is a sophomore at the Beijing-based Renmin University of China.

Study in the Mainland

Since 2004, universities in the Chinese mainland started to conduct joint enrollment by recommendation in Macao. Fifteen years on, nearly 6,000 Macao students have been admitted to mainland universities by way of recommendation. The young students who talked with us in this interview are all beneficiaries of the educational policy.

"Every October, Macao will hold a grand college fair for local students to get to know about the mainland universities and their enrollment policies. Once you are recommended by your high school, you may sit a test or receive an interview from the university you apply for the next January. If you are qualified, then you are able to go to university in the Chinese mainland," Wong said, explaining enrollment procedures.

"I chose to major in finance at Renmin University because it has long been a leading institution in humanities and social sciences study, especially in finance and economics. In addition, the mainland colleges are based in the very large mainland market so that they have more development opportunities to offer for their students," Ho said when asked why he wanted to seek education in the Chinese mainland.

"My university offers special scholarships for students from Hong Kong, Macao and Taiwan. For students who struggle with everyday classes, there is one-on-one tutoring and lectures on the final exams to help," said Lam Kai Hou, another Macao student now studying at Beijing-based University of International Business and Economics.

"Studying in the mainland is a rewarding challenge. It has broadened my horizons and exposed me to quality educational resources and plenty of opportunities. I'm also happy to make friends with students from all over the county," Lam added. 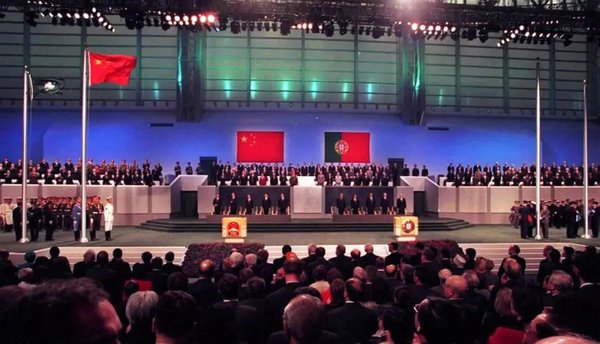 A view of the Macao Handover Ceremony held in Macao on the night of December 19, 1999. The ceremony marked the restoration of Macao from Portugal to the People's Republic China. [Xinhua]

Memory of the Day

December 20, 1999 is indubitably a historic day for Macao, marking a shift of destiny for the former Portuguese colony. Though the students born near the turn of the millennium are too young to remember, precious memories of the day have been passed on to them by their parents.

"On the eve of December 20, 1999, my parents prepared a nice family dinner to celebrate the event. Gathering before the television, they watched the solemn Macao Handover Ceremony. Actually, they didn't expect that such transformative changes would take place in Macao so they didn't have that strong feelings that night. But looking back, they came to realize that it was a really truly memorable moment," Ho said. 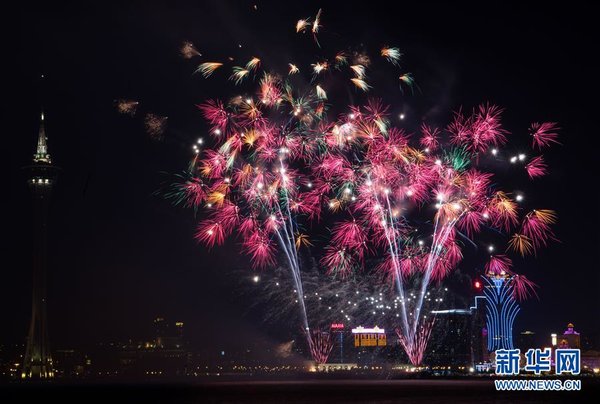 A firework show is held in Macao to celebrate its 18th anniversary of its return to the motherland, December 20, 2017. [Xinhua]

"On the day of Macao's return, my parents went on the street in crowds to welcome the People's Liberation Army Macao Garrison as it entered Macao in armored vehicles. They also watched the mass parade on television and a fireworks display at night. Grand celebrations continued the whole day and they felt very delighted and excited," Lam said.

"In my memory, almost on every year's return anniversaries, a spectacular fireworks show would be put on near the Sai Van Bridge, attracting a huge number of people to watch. Brilliant fireworks explode in the music, creating a festival atmosphere. Since individuals are not allowed to set off fireworks in Macao, the firework ritual is especially popular," Wong added. 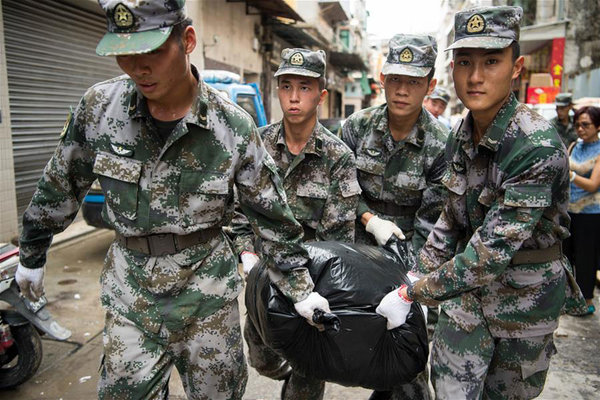 "Law and order has really improved. My mother told me that she could often hear gunshots and gunfights could break out at any moment before Macao's return. Gangsters were rampant. When she was nine months pregnant with me, she ran back home at once as soon as she heard a gunshot," Wong told.

"Macao is a safe and harmonious place now. Everyone is busy with their work in good security. Numerous public events, activities are held for you to participate every year. It's a totally different image from the past in which you needed to hide once heard gunshots, and received identity checks at any time," said Wong.

"In August 2017, typhoon Hato struck Macao and caused extensive damage. The flood water inundated three stories of the high-rise building my family lived in," Chan Hio Pan, a postgraduate student from Macao at the University of International Business and Economics, recalled.

"The People's Liberation Army garrison troops were dispatched to help local people restore normalcy. Under a scorching sun, they went onto streets to clean up the garbage, fallen tree branches and the sludge. We thanked them for their help from the bottom of our hearts," Chan said. 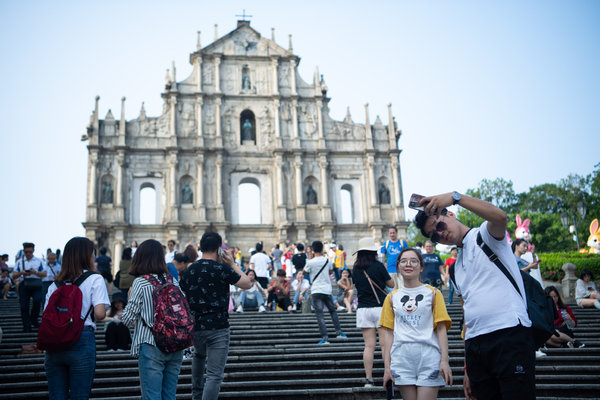 "Macao's economy has boomed over the past 20 years, especially tourism. New shopping malls and new casinos have been completed one after another. Social welfare has been largely improved. We have 15 years of free education Our medical care is free to all. We even enjoy an extra cash subsidy from the government," said Lam.

"Smartphone payment has taken off in popularity and we also don't need to bring a wallet with us. Macao people are embracing new lifestyles," Lam added. 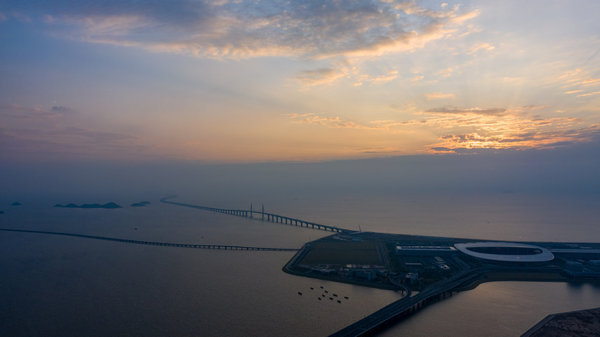 "Macao is continuously integrating its own development into the overall development of the country. Hong Kong-Zhuhai-Macao links the Guangdong-Hong Kong-Macao Greater Bay Area even closer. Alibaba Cloud and Macao are working together to build smart city. Macao also has a role to play in the Belt and Road Initiative, which is to create a bridge between the mainland and the Portuguese-speaking countries," Ho said.

"More recently, I'm surprised by the news that Macao is considering building an offshore renminbi securities market. All these make me feel that Macao is a place where changes take place every day, a city full of enterprising spirit and possibilities," Ho added. 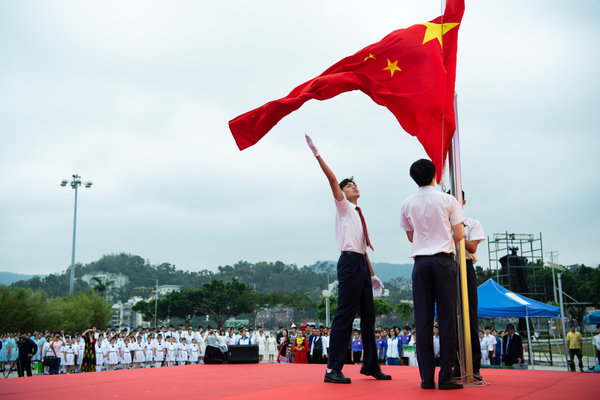 Students from Hou Kong High School hold a flag-raising ceremony in Macao, on May 4, 2019. [Xinhua]

"This year marks the 20th anniversary of Macao's handover to China and I just turned 20. Though I'm too young to say that I have witnessed Macao's development in the past two Decemberades, I am still honored to grow up with her and see her changing for the better. The return anniversary has always been a significant day in Macao residents' hearts and I wish her all the best and a brighter future," Wong said.

"The country is like a mother and Macao is her child. She has been with us all along the way and we cherish a deep sense of gratitude for her. And I encourage more Macao people to learn more about what the country has done to develop the region," Ho said. 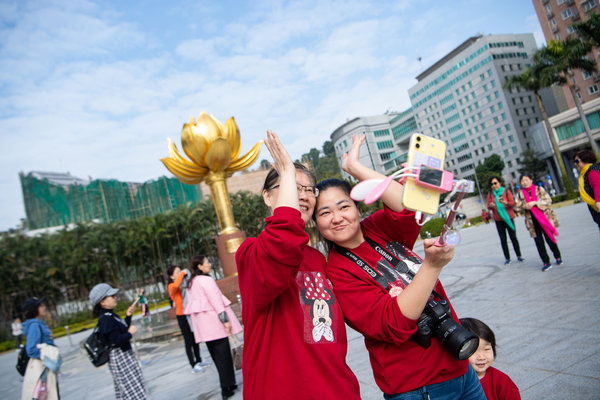 Visitors take selfies at the Golden Lotus Square in Macao, on December 13, 2019. [Xinhua]

"In a blink of an eye, 20 years has passed by. I was a middle school student when the 10th anniversary of Macao's return was celebrated. The 20th anniversary is coming around and I am already a postgraduate," Chan said.

"I hope Macao will make full use of its advantages and play its part in the Greater Bay Area by strengthening the business ties between China and Portuguese-speaking countries. I myself also plan to contribute to Macao's development after graduation," Chan said.

"The prosperity of today's Macao could not be possible without the country's help. So I always feel proud of being a part of China's Macao. I expect that Macao could achieve better, more stable and more peaceful development in the future," Lam said.