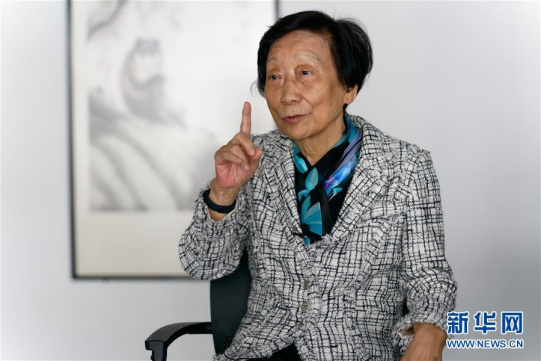 Chou, 78, was born into a family in Ningbo, a city in East China's Zhejiang Province. She went to France for further education after graduating from the Department of Physics at Anhui University in Hefei, capital city of East China's Anhui Province.

Chou chose to settle down in Macao and worked for her father's textile firm after completing her overseas studies in 1968.

She made an investment in neighboring Zhuhai, a city in South China's Guangdong Province, 10 years later.

Chou was the only directly-elected female member of the first legislative assembly in Macao during the colonial rule by Portugal in 1976. She was invited to draft the Basic Law of the Macao SAR after the Joint Declaration of the Government of the People's Republic of China and the Government of the Republic of Portugal on the Question of Macao took effect on January 15, 1988.

It was her proposal to allow Macao-born Portuguese to retain their passports issued by Portugal while being granted Chinese nationality that finally persuaded many recipients, including talented personnel, to stay in the SAR and continue to contribute to its prosperity and development since Macao's return to the motherland on December 20, 1999.

Chou headed all members of the 1st Legislative Assembly of the Macao SAR as they took an oath of allegiance to China's national flag and the flag of the Macao SAR, showed their full support to the Basic Law, gave their pledge of loyalty to the Macao SAR, and pledged to spare no efforts to serve local society at the handover ceremony held on the early morning of December 20, 1999. She asked the members who could speak Chinese to perform the oath-taking in Mandarin.

With the strong support of the SAR government and people from all walks of life in Macao, Chou and other legislative members had enacted and amended a total of 141 laws, which played important roles in safeguarding local social stability and economic prosperity, before she retired in 2009.

Chou founded the Tong Chai Charity Association early in 2006. Charity became the main way in which Chou continued to serve Macao after her retirement.

Apart from extending a helping hand to local college students in their further studies in Portugal, Chou has been closely involved in charity programs for preschool and primary education, diverse courses for senior citizens in a senior citizen activity center the association established.

In addition, in 2013 she set up Perfection Ltd., which was aimed at providing Portuguese-speaking countries with multiple services such as translation, conventions, exhibitions and intergovernmental cooperation in their import and export business with China so as to build the SAR into a commerce and trade cooperation service platform between China and those countries.

Chou has closely monitored the development of local society and still frequently interacts with young people in Macao. She concluded the interview by saying that her greatest wish is for a bright future for Macao, together with the sound implementation of the principle of "one country, two systems."

(Source: Xinhua/Translated and edited by Women of China)