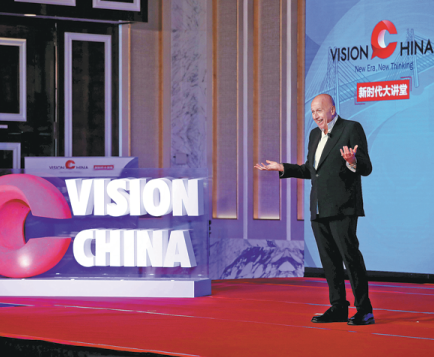 The grand Guangdong-Hong Kong-Macao Greater Bay Area plan will be a wellspring of activity in South China, and Macao can play a significant role in the area, officials, business leaders and scholars said at the "Greater Bay Area: Building a Mega Powerhouse" forum in Macao on Wednesday.

Speaking at the opening of the forum, China Daily Deputy Editor-in-Chief Qu Yingpu said integrated development of the Greater Bay Area is beneficial for Hong Kong and Macao.

Macao's economy has expanded rapidly over the past 20 years since its return to the motherland. The special administrative region is also playing a key role as a global tourism and leisure center and a platform for deepening trade and economic cooperation between China and Portuguese-speaking countries.

"An increasingly prosperous Macao is living proof of the successful practice of the 'one country, two systems' principle," Qu said.

"Although we face some challenges today, the 'one country, two systems' principle will shine more brilliantly in Hong Kong and Macao as long as we unite as one. In doing so, the Guangdong-Hong Kong-Macao Greater Bay Area will become a dynamic, first-class area with global competitiveness and the dream of the great rejuvenation of Chinese nation is bound to come true," he said.

The central government laid out the development blueprint of the Greater Bay Area in February, aiming to turn the region, traditionally known as the country's manufacturing hub, into a global innovation and technology powerhouse.

Irene Lau Kuan-va, president of the Macao Trade and Investment Promotion Institute, said the positioning of Macao as a "core engine" in the Greater Bay Area blueprint shows the trust and expectations by the central government in Macao's role in the national project.

With the Greater Bay Area bringing "unprecedented" opportunities for Macao, the SAR should leverage its unique strengths to take active part in its development to promote diversified development of its economy and strengthen economic and trade cooperation between China and international markets, especially Portuguese-speaking areas, Lau said.

She also stressed the need for developing innovation and technology in Macao.

"We should pursue development of the Guangzhou-Shenzhen-Hong Kong-Macao innovation and technology corridor, which jointly develops a big data center as well as platforms for international innovation in the Greater Bay Area," Lau added.

Sharing her own story of working in the Greater Bay Area, Pansy Ho, group executive chairman and managing director of Shun Tak Holdings, said she has been working to enhance connectivity in the southern region since she started her business over 20 years ago.

Ho highlighted the importance of cities in the region to cooperate in order to achieve mutual growth.

"We knew from early on that we needed to work together. We have never been given a clear path and passage, but ultimately we need to work on our initiatives. And collaboration and cooperation is the way to do it," she said.

Zhang Weiwei, director of the China Institute at Fudan University, argues that China's growth model has many things to contribute to the Greater Bay Area development plan.

Zhang said China has found a unique development model and it has been proved to be successful. In the past 40 years, the country's average annual GDP growth rate reached about 9 percent and its trade growth rate is about 15 percent yearly. More importantly, by 2018, China had lifted 850 million people from poverty.

The Greater Bay Area blueprint highlights putting people's livelihoods first, opening up at home and abroad, adopting consultative democracy and strategic planning — all of which are in line with China's model in political, economic and social domains, he said.

As to how the area will influence the nation's overall development in the future, Zhang said technology will play a key role.

John Ross, a senior fellow at the Chongyang Institute for Financial Studies of Renmin University of China and former director of Economic and Business Policy of London, said the Greater Bay Area and California in the United States are the two greatest centers of high technology development in the world.

Ross said the overall technology level in China, even the Greater Bay Area, has not yet reached the level of the US. However, "China is actually in advance of the US in some areas," he said, citing mobile payments and high-speed trains as two examples.

However, Zeman said encouraging young people to be more actively involved with the area's development is the biggest challenge. "Government in general gives a plan and people are slow to react. But once a few people who could see the future are willing to explore the area, they will be held up as examples and usher a whole wave of young people into the region."

He recalled when he was talking with local officials and entrepreneurs of Shenzhen and Shanghai several decades ago that he could not imagine their vision for these cities' future, but he has witnessed the tremendous changes of the two boomtowns.

He said this time he saw the vision of the Greater Bay Area, and urged young people to keep an open mind and look at things not for what they are but what they could be.

The Macao forum is the latest among a series of Vision China events since it was launched in January 2018. The events, which serve as a bridge for communication between China and the rest of the world, feature well-known Chinese and overseas opinion leaders discussing Chinese topics of international significance.