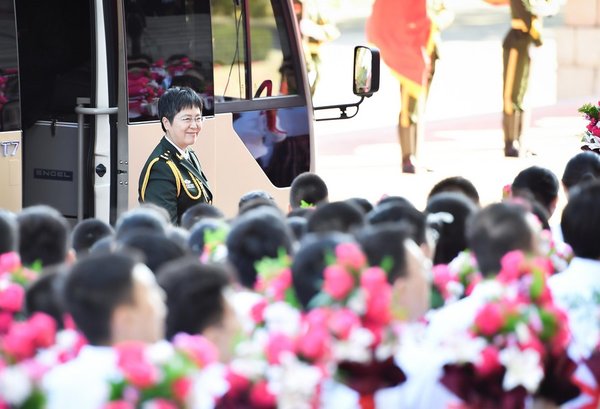 Chen Wei, recipient of the "People's Hero" national honorary title, arrives at the Great Hall of the People in Beijing, capital of China, Sept. 8, 2020. [Xinhua/Li Xiang]

At a meeting held at the Great Hall of the People in Beijing, Chinese President Xi Jinping presented medals to her and other recipients.

Chen, a 54-year-old researcher at the Institute of Military Medicine under the Academy of Military Sciences, has made major achievements in COVID-19-related basic research and development of vaccine and protective medicine.

On Jan. 23, China locked down Wuhan, the capital city of Hubei Province, to curb the spread of the infectious disease. Three days later, Chen arrived in Wuhan to focus on vaccine development.

Chen cut her black hair short for the convenience of working in a protective suit. After months of intense lab research and on the frontline battle against the virus, some of her hair turned grey.

"It is the call of duty because I'm a person in uniform. I was obliged to do all that I did," she said.

On March 16, the adenovirus vector vaccine developed by Chen's team started phase-one clinical trials, the first in the world. According to the data published in the medical journal The Lancet in May, all 108 vaccinated participants produced antibodies.

"By releasing our testing methods and indicators to the world, we have helped researchers from other countries take fewer detours and promote global vaccine research," Chen said. 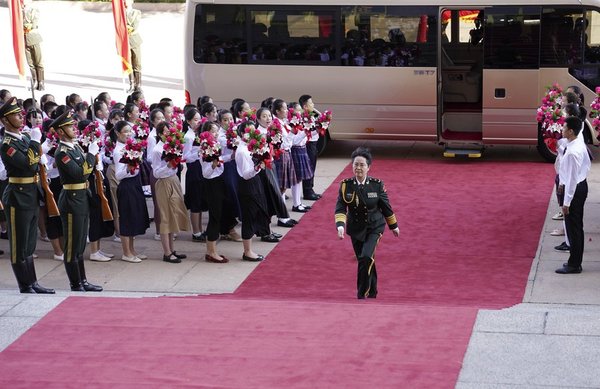 Chen Wei, recipient of the "People's Hero" national honorary title, arrives at the Great Hall of the People in Beijing, capital of China, Sept. 8, 2020.[Xinhua/Yin Bogu]

It was not the first time that Chen has stood on the front line against viruses over the past decades.

Her team developed a nasal spray that helped protect medical staff against SARS viruses in 2003, and developed a vaccine for Ebola in 2014.

She attributes the outstanding achievements to her team. "Everyone in the team has shown extraordinary perseverance and contributed their wisdom," she said.

Chen was born in the city of Lanxi, east China's Zhejiang Province, in 1966. On April 12 this year, she sent a voice message to more than 80,000 middle and primary school students in Lanxi.

"We must bring good to society so that our lives will be meaningful, and your world will be even more splendid by bringing warmth to others," Chen said in the message.