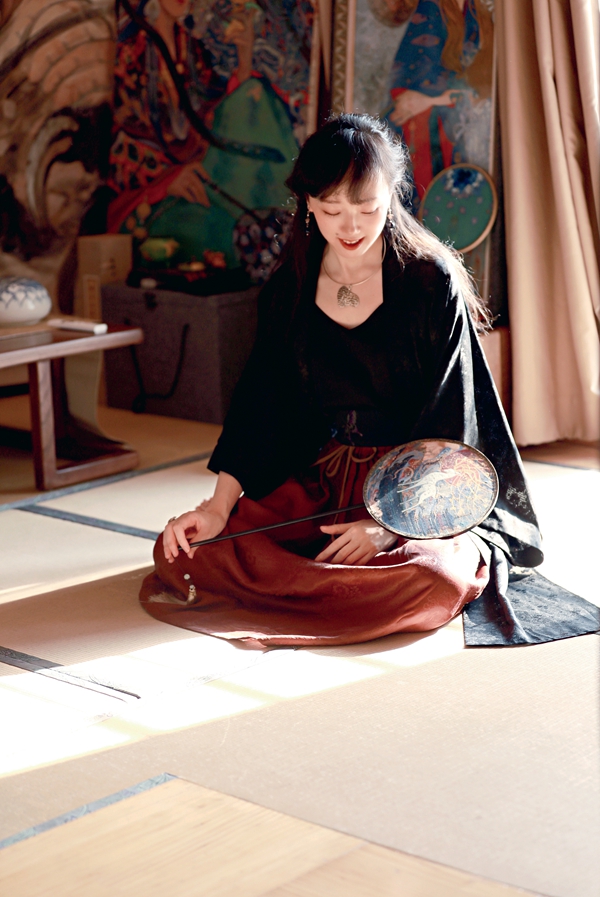 Lian Yang, a young Chinese artist, during the past several years has made tremendous efforts to promote the development of rock paintings, and to help people, especially young people, from around the world better understand the beauty of the traditional Chinese art form. "Given China's growing national power, Chinese have a stronger sense of national identity. As a result, their cultural confidence has been growing stronger. The revival of the art form (rock paintings) has mirrored that change," Lian has been quoted as saying.

Lian, who "fell in love" with the exquisite paintings at first sight, was deeply impressed by the rock paintings' rich colors — and mysterious atmosphere. She was delighted to note the paintings integrated elements of both Oriental and Western paintings.

In 2008, Lian graduated from China Central Academy of Fine Arts. Before she began studying rock paintings, in 2015, Lian devoted her time to improving her skills in creating Chinese wash paintings and CG (computer graphics) paintings. As she was good at painting dragons, she was referred to as "the youngest dragon painter in China" by the art community. Lian's painting, Long Si, earned her the special prize during the 30th Barcelona International Cartoon Festival, which was held in 2012.

Despite her outstanding achievements, Lian felt an overwhelming need to find another genre of painting, through which artists may express their feelings, and through which one may get a glimpse into the exuberant vitality of the traditional Chinese culture. "I spent three years studying the basic skills of traditional Chinese paintings. However, given the rise of digital painting, my painting skills might be less valued in future. Now, a digital artist can turn a photo into a watercolor or a traditional Chinese painting with a simple press of a button," says Lian.

During her visit to a temple in Tibet (in Southwest China) in 2015, she was stunned by the unique beauty of the rock painting (in the temple). "As I looked at the painting, I thought many young Chinese, who would be impressed by the painting's strong artistic effect, would consider the art form an ideal carrier of their feelings and emotions. Then, I was determined to study rock paintings," recalls Lian. 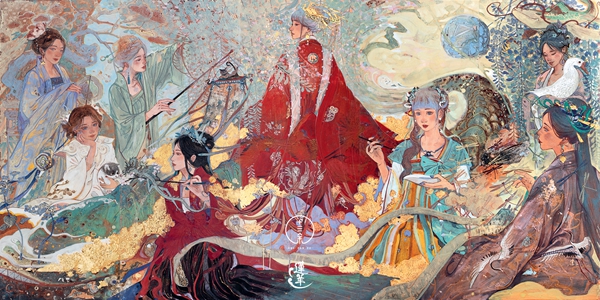 Out of Her Comfort Zone

Many of Lian's friends and relatives opposed her decision to study rock paintings, as they believed she was too old to learn new things. That did not curb her enthusiasm to explore the fantastic, mysterious paintings. She was determined to step out of her comfort zone, to achieve greater career success.

Based on archeological evidence, rock paintings can be traced back to the Paleolithic Age (more than three million years ago). During the Sui (581-618) and Tang (618-907) dynasties, the art form spread to Japan. The paintings were most popular during the Tang Dynasty and the Five Dynasties Period (907-960). The art form started to wane during the Yuan Dynasty (1206-1368). Lian felt obliged to do something to revive and promote the traditional Chinese art.

When she was 28 years old, Lian moved to Japan to study the skills needed to create rock paintings. She and several young Chinese, also studying in Japan, promoted the paintings via new media (including online live shows), so the artworks might attract more fans.

By using pigments, made from powdered minerals and precious stones, to paint on hemp paper, artists create rock paintings with strong artistic effects. It takes much time and energy to create the paintings.

Given the special skills of creating the paintings, the artworks, with a three-dimensional effect, have tremendous aesthetic value. The bright-colored paintings will not fade easily.

In 2019, Lian studied rock paintings in several grottoes in Gansu Province and Xinjiang Uygur Autonomous Region (both in Northwest China). The activity was a component of the Project of Reviving Rock Paintings Along the Silk Road, sponsored by the Institute of Renaissance Research (under Renmin University of China) and Shanghai Academy of Fine Arts. As she appreciated the ancient murals in the grottoes, Lian pondered how she could integrate elements of other art forms, as she created rock paintings, so youths worldwide could better understand the artworks' unique beauty.

In 2018, Lian was employed by a game company, in Beijing, to design the poster for one of the games. She created a rock painting, with the image of Yang Yuhuan (concubine of Emperor Xuanzong of the Tang Dynasty) playing the pipa (a plucked string instrument) behind her back. Yang looked like a flying apsara (female spirit of the clouds and water), whose swaying dress and colorful ribbons set off her beautiful posture and movement in the air. The painting is housed in Guimet Museum of Asian Art, in Paris. 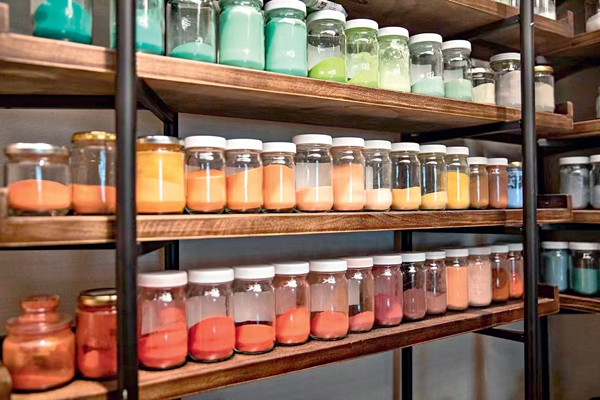 Every year, Lian creates a painting with the image of the Tibetan Goddess of Wealth. Each painting to date has been integrated with both traditional and modern artistic elements. "A young businessman, who ‘fell in love' with my painting (with the image of the goddess) at first sight, put the painting in his office. He said, through my work, he can perceive the charm of Oriental aesthetics. He also said the painting meets young people's aesthetic tastes," says Lian.

Meeting at Yaotai (dwelling of immortals) Under the Moon is one of the works that has given Lian the greatest satisfaction. Why? The two-meter by one-meter work vividly portrays eight beauties in hanfu, the traditional Chinese costumes during the Han Dynasty (206 BC-220 AD). The online video, which features the process of creating the painting, has been a hit with netizens. Numerous people have been impressed by the charming women (in the painting) and their beautiful costumes.

Lian, who has the spirit of innovation, challenges herself by using new techniques to depict figures. Her works have been well accepted by many young Chinese. 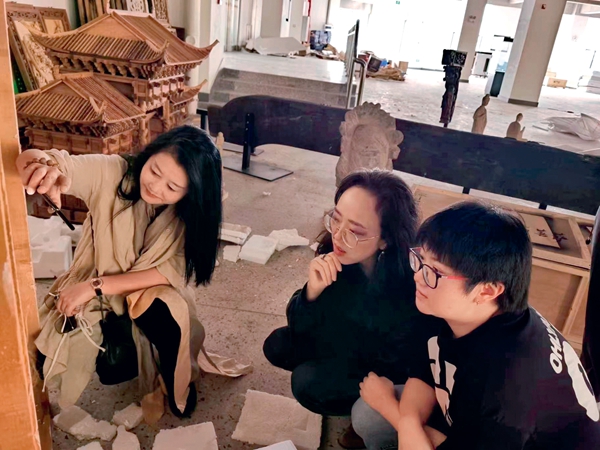 As an artist, Lian has never hidden the fact she and her business partners (including publishers, game companies and advertising agencies) have used smart marketing strategies to promote Lian's rock paintings. "We hope that will help more people, especially youths, from around the world, better understand the paintings' unique beauty," says Lian.

In late 2021, she gave a speech to promote rock paintings in Tsinghua University (in Beijing). In addition to 200 of the university's students, who participated in the activity, more than 13,000 people listened to Lian's speech online.

Since the outbreak of novel coronavirus disease (COVID-19), in early 2020, Lian has promoted her paintings via online videos and/or live shows, so her artworks might attract more fans. Lian is delighted that some of her apprentices are following in her footsteps, and they are trying their best to improve their painting skills. Some other apprentices have been taking the lead, across China, in producing hemp paper, mineral pigments and other raw materials used to create the paintings.

As she has been committed to promoting rock paintings during the past several years, Lian has witnessed the rapid development of both the art form and the revival of the traditional Chinese culture.

"As China has made tremendous efforts to enhance people's cultural confidence in recent years, the country has seen a surge in young consumers' interest in domestic-brand products, which incorporate traditional Chinese cultural elements ... I'll make greater efforts to promote the paintings, to follow the trend of the times," says Lian. 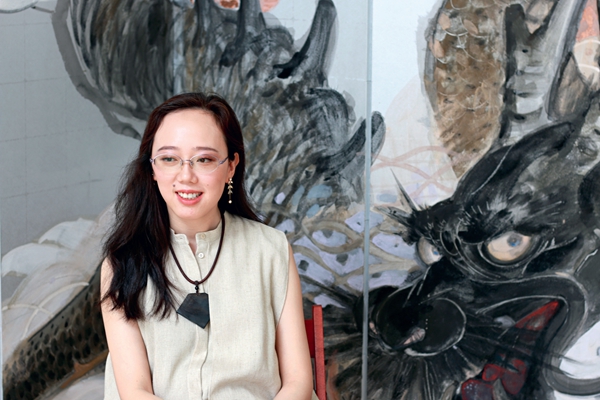 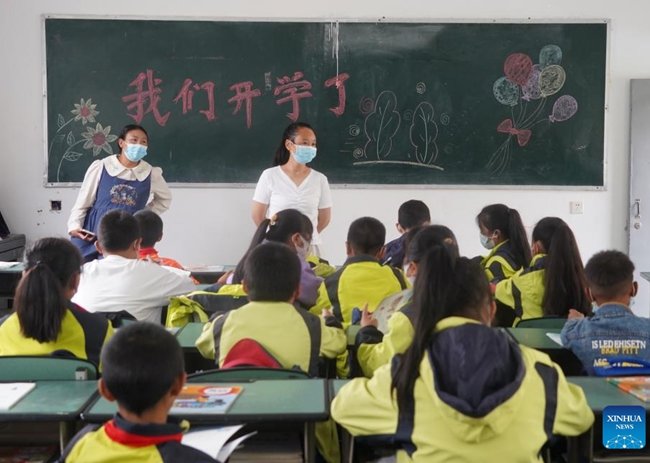 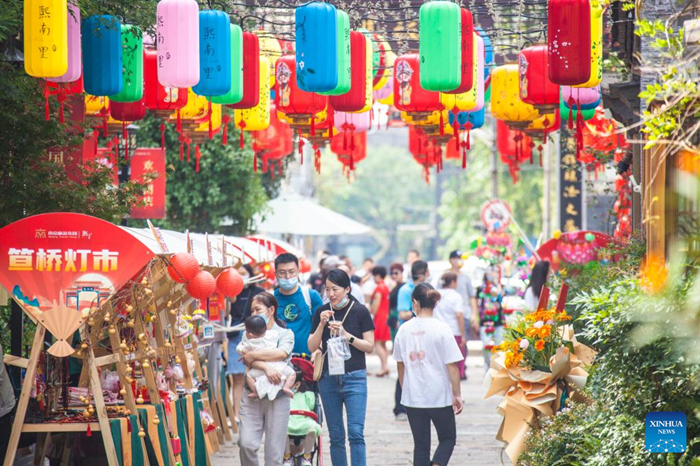