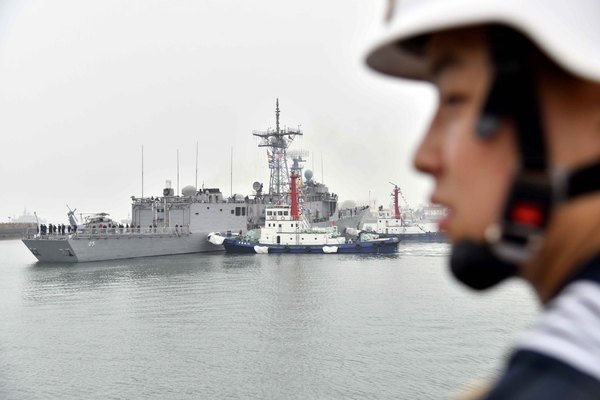 Australian navy's guided missile frigate HMAS Melbourne arrives in the port city of Qingdao, East China's Shandong Province, April 21, 2019, to join multinational naval events commemorating the 70th anniversary of the founding of the Chinese People's Liberation Army (PLA) Navy. The events will be held between April 22 and 25 and a naval parade will be held in Qingdao and nearby sea areas and airspace on April 23.[Xinhua]

The People's Liberation Army Navy held a gathering in Beijing on Sunday to mark the coming 70th anniversary of its founding.

The gathering, approved by the Central Military Commission, was organized to review the achievements and historical experience of the Navy and also to declare its goal of becoming a world-class force.

Ten units and 26 individuals who have made significant contributions to the Navy were honored at the ceremony attended by 1,300 military personnel.