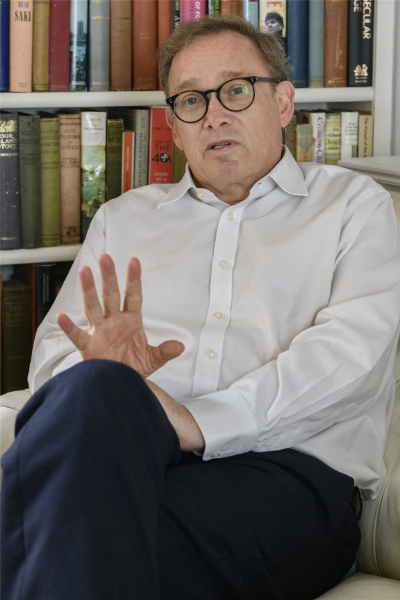 Adrian Wooldridge believes the pandemic has revealed major weaknesses in the way the West is governed.

The 61-year-old political editor of The Economist, the British weekly magazine, says its failure to get to grips with the virus compared to the relative success of China and other East Asian countries in doing so has laid bare systemic failings.

"The West is growing complacent in terms of its government capacity and other chunks of the world are pulling ahead. This has been more and more vindicated by COVID-19," he says.

Wooldridge makes the argument in his new book, The Wake-up Call: Why the pandemic has exposed the weakness of the West-and how to fix it, written with John Micklethwait, himself a former editor of The Economist and now editor-in-chief of Bloomberg News.

The two former colleagues have a long-standing writing collaboration and the new book develops some of the themes in The Fourth Revolution: The Global Race to Reinvent the State, published in 2014.

"What we argued in that book was that the West was waking up to its problems, that it was beginning to take government more seriously, beginning, for example, to apply technological innovation to governance, and that it was on the right track. What COVID-19 has demonstrated is that we were very wrong about that," he says.

Wooldridge, who is speaking from his home in the South Downs of Hampshire in southern England, where he has spent much of his time this year due to the country's lockdown, is in a good position to assess the competence of Western governments since he has had a ringside seat in his 33 years at The Economist.

He has been its Los Angeles-based West Coast correspondent and its Washington correspondent before returning to the United Kingdom, where he now writes the Bagehot column on British politics, named after the periodical's famous 19th-century editor.

Apart from Micklethwait, he has also collaborated with former Federal Reserve Bank chairman Alan Greenspan in writing Capitalism in America: A History.

"Working for the Economist (where famously there are no bylines) I am quite used to a collaborative sort of enterprise," he says, laughing.

Wooldridge says the West now does need the wake-up call the title of the new book suggests. He insists the solutions it has come up with since the publication of The Fourth Revolution, the election of Donald Trump in the United States and Brexit in the UK, have been just "quackery".

"But it produces quack solutions, blaming everything on immigrants and the greediness of the elite rather than on structural problems within the system."

In their new book, in order to find solutions, the authors analyze why the West rose to ascendancy in the first place and has dominated the world order for the past 200 years or more.

"If you go back to the year 1500, China was the world's most impressive power, both in terms of its economic productivity and its administrative system. It had the world's biggest city in Beijing and the most advanced technologies in areas such as irrigation and shipbuilding," he says.

"Meanwhile the West at that time was a bloodstained backwater with constant wars between evil rival gangs." 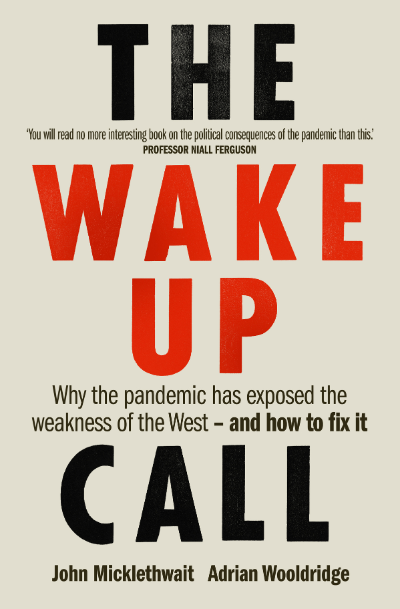 There were three developments afterward that led inexorably to the rise of the West, according to the book.

The first was the creation of the nation state, which was underpinned by the ideas of the 17th-century English philosopher Thomas Hobbes, where national boundaries were drawn and a legal system was developed.

Next came the phase when the capitalist classes who created the new wealth rose up against the idle aristocrats, which was epitomized by the Industrial Revolution in the UK, the French Revolution in 1789 and the founding of the US. This created a liberal consensus associated with the thinking of economist and philosopher John Stuart Mill.

The West then had to evolve again in the early 20th century because there was a whole section of society that was being left behind. So influenced by the ideas of the Fabian Society in the UK, whose founders included socialists Sidney and Beatrice Webb, a welfare state emerged, providing benefits such as old-age pensions for the first time.

Wooldridge says while the West developed industrial power and was colonizing much of the world, China was atrophying.

"You had the same examination system based on the Confucian classics in the early 20th century that you had in the mid-16th century, not incorporating any new knowledge at all," he says.

Wooldridge says this is in marked contrast to today where the advancement of China and also the rest of Asia goes beyond the handling of just the pandemic.

"If you fly into Shanghai or Beijing, you see an airport that is far, far better than JFK or LaGuardia. In fact those look like slums in comparison," he says.

"This improvement is also true of big sections of administration. The world's top smart cities are not in the UK or the US either. If the West does not wake up to this, it is going to recede and fall behind the East, which led by China as its great power will set the tone for the future."

The book argues that the West's problems began in the 1960s when paradoxically it was at its most ambitious in terms of sending men to the moon since this was also a time it began to think that government did not matter. This, according to Wooldridge, was compounded by the Reagan-Thatcher era in the US and the UK in the 1980s.

"The issue for them was that government was the problem and not the solution. In some ways they were right because the state had become too big but, as we are learning from COVID-19, government matters more than they ever were prepared to concede," he says.

Wooldridge says the solution to the West's ills is not to adopt the Chinese system or any other Asian government model, but to learn from them and embark on another revolution of Western governance.

The person to do that is not necessarily any current political figure, but somebody they call Bill Lincoln, who embodies the reforming instincts of William Gladstone, the 19th-century British prime minister, and Abraham Lincoln, the great US president of the same era. This modern-day Lincoln's priorities would be to follow the example of Lee Kuan Yew, modern Singapore's founding father, and pay high salaries to those working in the public sector to attract top talent.

"In the 1950s and 1960s, quite often the best and brightest people in the US would go into public service. John F Kennedy said in his inaugural address 'ask not what your country can do for you, but what you can do for your country'," he says.

"Now, however, all the rewards are for going into the private sector, working for hedge funds in the finance sector or the new tech companies."

Wooldridge says there was a particular weakness in those working in tech for the government itself, which has been a particular handicap dealing with the pandemic.

"There are five times as many people in the tech bits of the public sector (in the US) who are over 50 years old, rather than under 30, since everyone now gravitates toward Google and Facebook."

The problem of the quality of public sector personnel also extends to people entering politics. "In Britain, for example, the current cabinet is the weakest I have known in my lifetime. It is just not an attractive career. The rewards are not there and with one silly Tweet, or by saying the wrong thing, your career can be over," he says.

One of Bill Lincoln's other priorities would be a major reform of taxation so it no longer gives such major benefits to those running hedge funds and capitalist companies "with good connections to government".

"Governments need to start spending on housing, on the welfare state, on the poor and on the deserving," he says.

For now, the main preoccupation is not fixing the Western liberal order, but surviving the pandemic without too much economic damage.

"If we have a vaccine, I think there will be quite a big rebound and the stock markets will boom, but there will be structural problems with a lot of production capacity destroyed. People will also be unwilling to go back to work because they have enjoyed working from home so much," he says.

"We will be going back to a new normal, but I think we will survive."