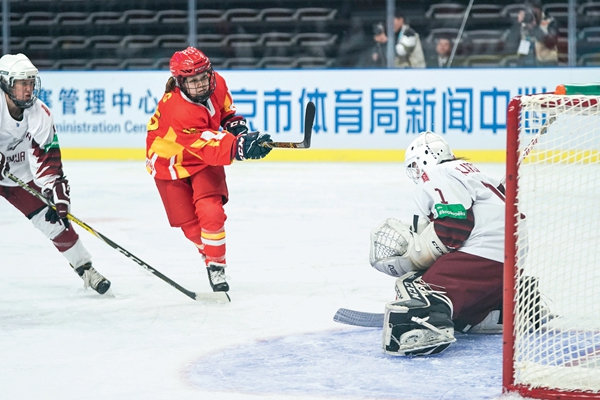 "Fourth place is the best result of the team (during Winter Olympics). I clearly remembered the gap between our team and the bronze winner was very small. We actually had a chance of winning the bronze medal," Wang Linuo recalls. Wang, born in 1979, is former captain of the team.

To celebrate the 100-day countdown to the Beijing Winter Olympics, Wang was invited to attend an activity organized by Beixiaguan Subdistrict, in Beijing's Haidian District, on October 27. She said she hoped more people, especially youth, would participate in ice and snow sports. She also said she hoped members of the national women's ice hockey team would give full play to their potential, and that they would make breakthroughs during the upcoming Beijing Winter Olympics.

The team is currently training in Russia, to prepare for the upcoming Winter Olympics. During training camp, which lasts from early August to December, 30 team members will participate in 40 Russian Women's Hockey League (WHL) games. The team will also compete against European squads in December. The camp is expected to improve the players' technical and tactical skills, and also enrich their playing experience.

"We cherish the opportunity to train and compete abroad. We have been training and competing hard every day," Yu Baiwei, the team's captain, says. Yu, born in 1988, became a member of the national team in 2005.

"Ice hockey has become part of my life … I always believe there is hope for our team, and we can achieve a better result in 2022," Yu says.

A Look at Geriatric Centers in Changde, Hunan