Gu Xuchang lives in Ludian, a county in Zhaotong, in Southwest China's Yunnan Province. Gu has a large extended family, composed of more than 90 members. They pay attention to education and family unity and harmony; in particular, they respect the elderly in their family. During the past decade, Gu's family has hosted a gathering, every Spring Festival, to pass their family's virtues down to the younger generations.

Gu has two aunts, an elder sister and five elder brothers. His extended family is composed of 26 smaller families. Since 2009, the large family has organized a gathering, during the Spring Festival, every year. They recite poems, answer riddles and give art performances during the gatherings. Inspired by Touching China (a program first aired in 2003 by China Central Television), Gu's family launched, in 2019, an annual selection of excellent family members; and especially, the family praises young members who study well in school. To date, 18 members have been named model senior, model with virtues, model with diligence, model of entrepreneurship, good in-laws, good worker and/or star of the future.

The family has set standards for nominations. All members can recommend themselves or others during the annul nominations of excellent family members. Before the formal selection, seven senior members of the family are selected to be the "judges." They consider each candidate's performance at school or in the workplace, and their virtues and achievements, and then the "judges" select each year's excellent family members. All of the sons-in-law, who were awarded, said they were proud to live in such a big, harmonious family. The in-laws have helped build a "bridge," which links Gu's family with their in-laws, extending their virtues to more people.

One of Gu Xuchang's aunts, 76-year-old Gu Yue'e, has witnessed the rapid development that has taken place in China since 1978, when the country implemented its policy of reform and opening to the world. Gu Yue'e was named a model worker by the agricultural production team, for which she worked when she was in her 20s. Over the past five decades, Gu Yue'e has always cared about her extended family. She often tells the younger members to show gratitude to the Communist Party of China, and to study hard and work diligently to strive for a promising future.

During this year's family's gathering, Gu Yue'e and her husband, Sun Yuangui, were both named model seniors, for having set a good example for the younger generations to respect and follow. 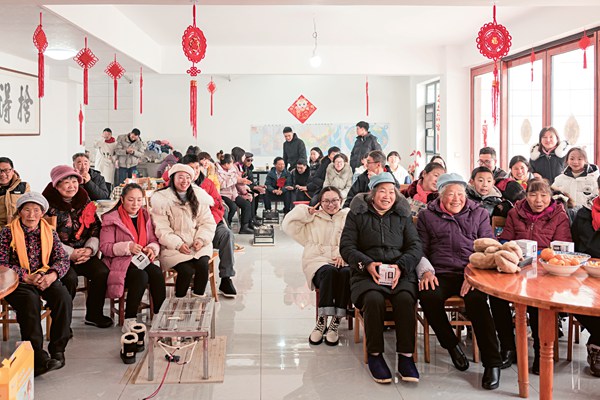 Gu Xuchang's family attaches importance to the education of its younger generations. Every year, the children in the big family — be they students of primary schools, middle schools or colleges — are awarded if they have acquired good test scores.

In August 2021, Gu Xuchang transformed a house, which had been rebuilt in his hometown, into an education base for children and teenagers of his extended family. During the summer vacation that year, Gu Xuchang let the young family members take part in colorful activities in his house. The youngest member was 3 years old; the eldest, 11. The children lived in the house. They did family chores, such as cleaning the house, washing vegetables and dishes, cooking and washing their clothes. They studied ancient poems and classic Chinese literature, sang "red songs" and performed exercises. They were taught to cook various foods; for example, making dumplings, steamed bread and preparing hotpot.

What's more, Gu Xuchang invited elderly members of his family to give lectures to the children, telling them stories about revolutionary pioneers in Chinese history. The children were taught to respect the elderly, study hard, and to make contributions to society after they grow up. The children spent a special vacation in Gu Xuchang's house. They lived together for 12 days, during which they deepened their friendships with each other, strengthened their team spirit and enhanced their life skills. In Gu Xuchang's rebuilt house, there is an exhibition room. Items of historical value, which have been collected from elderly members of his family, are on display. Photos of excellent family members are hung on a wall displaying "the family's honors." There is also a reading room, for family members to read and/or study together. Approximately 1,000 books have been collected by the family, and they are exhibited in this room and available for anyone's use.

Good traditions are passed from generation to generation within the family. A dozen media outlets have reported on Gu Xuchang's family. In 2021, People.cn posted an article, which gave a "thumb up" to the annual Spring Festival gathering of Gu's extended family, and their family's virtues.

Gu's family invites neighbors and friends to join in their gatherings. They hope to bring harmony to more families in their neighborhood. In mid-May this year, Gu's family was selected one of the National Most Beautiful Families.

(Source: The Department of Family and Children's Affairs of the All-China Women's Federation/Women of China English Monthly July 2022 issue)