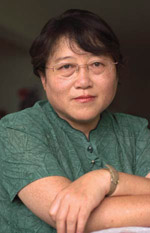 Li Yinhe (February 4, 1952 -) is a sociologist, sexologist and activist for LGBT (Lesbian, Gay, Bisexual, Transgender) rights in China. Li was the first female sexologist to introduce western theories on the subject to China and to promote studies on gay male and female sexuality. She was married to the late writer Wang Xiaobo. Li's name appeared on the Asia Week magazine 50 Most Influential People in China list. She has twice publicly raised the issue of gay marriage (in 2003 and 2005) at the Chinese People's Political Consultative Conference.