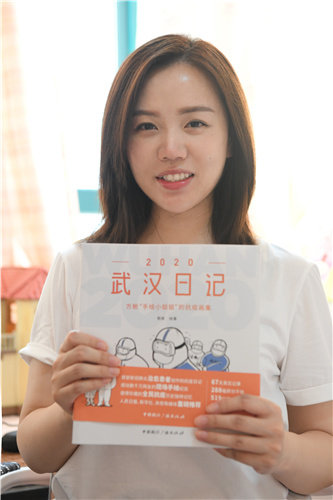 The central Chinese city of Wuhan has finally emerged from its darkest hour in the fight against the novel coronavirus and is in a gradual state of revival.

Local illustrator Li Jing, who herself has recovered from a personal battle with COVID-19, believes that the indelible memories of those who helped the city through the difficult period should be recorded and remembered.

Recently, she has been busy introducing readers to her newly published book－her illustrated record of stories from Wuhan based on various sources ranging from her personal experience, touching stories recounted by her friends as well as news reports and media coverage.

The book, which could be viewed as a sort of dairy, contains 288 hand-painted illustrations depicting medical staff, delivery workers, builders of the Leishenshan and Huoshenshan hospitals, police, sanitation workers, community workers, volunteers and many others who participated in the city's tenacious fight against the virus, as well as conveying the fear and love she experienced over the course of the 105-day period.

"It's my way to express gratitude to those who helped us over the past few months, and show readers what Wuhan has been through in a positive perspective," the 38-year-old explains. 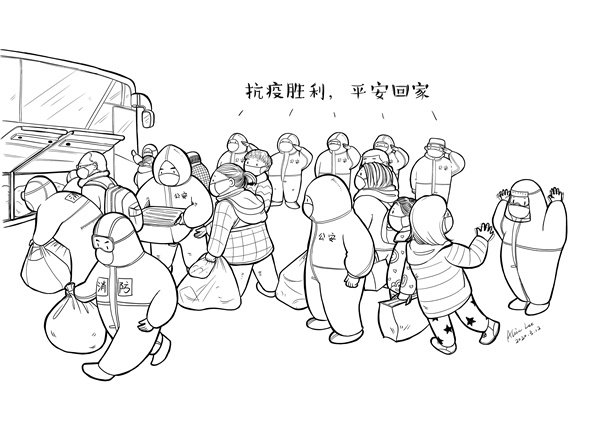 Unlike photographs that captured the realism of key moments, Li decided to represent the front line workers and the other subjects as cute cartoon characters to deliver joy via a more animated approach.

"I draw pictures of those who cared for us, the love and warmth we feel is unforgettable," she says, adding that she hopes to record the warmth she received and pass it on to more people.

Wuhan was hit hard by the virus as the number of confirmed cases grew quickly, and the city was overwhelmed with anxiety and fear. Li found out that she had contracted COVID-19 in February, and was admitted to a makeshift hospital in a converted sports stadium that held around 300 patients with mild symptoms.

The gloomy and cold weather, coupled with her worries about her family and the fear of a sudden worsening of her condition, depressed Li in the first few days of her stay at the facility, known as Fangcang hospital. 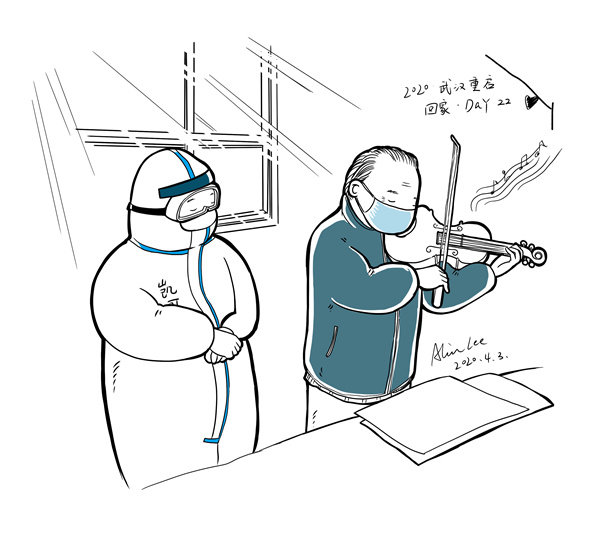 Wang Xin, an 87-year-old musician, plays violin for Liu Kai, a medical worker from Shanghai who tended him during the COVID-19 epidemic in Wuhan. [Photo provided to China Daily]

On her fifth day in the stadium, she recalls, the sun finally came out, and she was informed that her family members were not infected. Li said she felt so relived, and so she decided to draw to kill the time.

With a notebook and a gel pen, Li began to create cartoon characters of the doctors and nurses who roamed the wards to take patients' temperatures, conduct blood tests, distribute prescribed drugs and provide meals.

The medical staff, in their full white protective clothing, reminded her of Baymax, the fictional superhero that appears in the 2014 Disney animated film Big Hero 6.

"They buzzed around giving us meticulous care, in real life they are all Baymax, sent to protect us and bring us strength," she says.

As well as treating their physical illness, they also acted as psychological therapists to give patients mental support, she adds.

In Li's illustrations, readers can see medical staff leading patients in dance routines to keep their spirits up, doctors spending hours comforting anxious patients, as well as a patient performing sketch comedy to cheer up his wife, a cancer sufferer who had contracted COVID-19.

After being discharged from the hospital and undergoing a 14-day quarantine, Li returned home.

With professional equipment, she continued her paintings－and repainted some of her previous ones－with materials provided by friends and internet users.

While creating the drawings, Li also wrote down the stories behind them and shared her feelings of the people depicted. 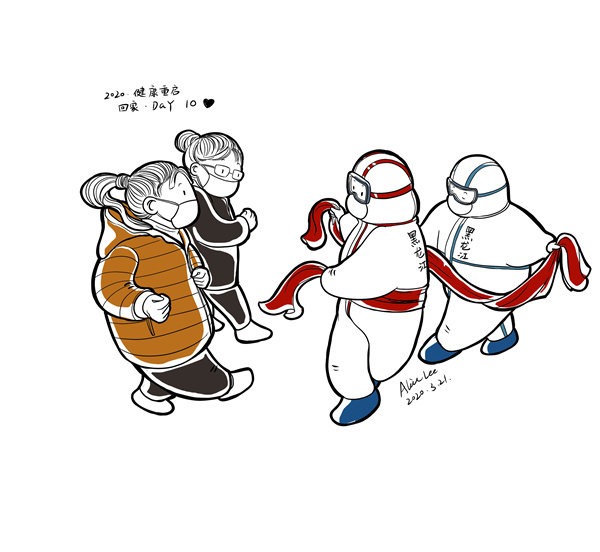 Medical workers dance with patients to cheer them up in a hospital in Wuhan. [Photo provided to China Daily]

She published the collection of illustrations in May.

She hasn't stopped, though, because there are still many impressive people and stories worthy of illustrating.

As someone who was infected with, and recovered from, the coronavirus, Li says the pandemic is an unforgettable experience, through which she felt depression and panic, but also saw the efficiency of the country in curbing the virus.

Through it all she has realized the importance of keeping healthy and cherishing the people around her.

Despite some confusion and disorder at the very beginning, the problems were solved quickly, and order was restored in a short time, she says, adding that what matters is to view these things with tolerance.

"There is no doubt that we have suffered psychological trauma, but we have to face it with an optimistic attitude."