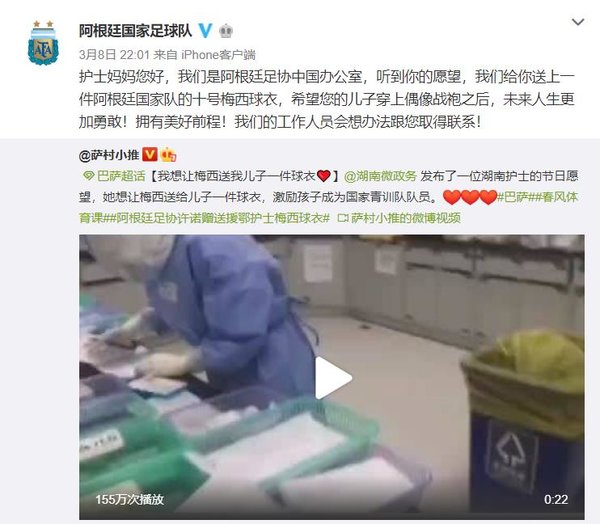 A screenshot of the official Weibo account of Argentina's national football team. [Xinhua]

CHANGSHA — Wu Yu, a nurse from Xiangya Hospital in Central China's Hunan Province, made a special wish on Women's Day —  she hoped Argentina's superstar footballer Lionel Messi would send her son a jersey.

In the past two days, not only has the Argentine Football Association responded to her wish, but her son's youth training club has also promised to arrange a coaching session with a leading Spanish coach free of charge.

After a busy day on duty on March 8, Wu was asked if she had a wish for Women's Day, and gave what she felt was an ambitious response. "I believe a jersey from Messi would definitely encourage my boy to become a member of the national youth training team," she said.

That night, the official Weibo account of Argentina's national football team responded: "Hello, this is the China office of the Argentine Football Association. After hearing your wish, we are going to send you a No.10 Messi jersey. Our staff will try to get in touch with you and we hope your son can have a brighter future after wearing his idol's shirt!"

Coming out of the hospital in the early morning of the next day, Wu received the good news. "I didn't expect this wish to come true because I just wanted to encourage my son," she said, adding that one of the reasons she had been inspired to join the fight against coronavirus in Wuhan is that she wanted to set a good example for her son, telling him that no difficulty can stop people from chasing their dreams.

Since February 7, Wu has been working in Union Hospital affiliated to Tongji Medical College, which contains critically ill patients from Wuhan. After she left home, her 8-year-old son, Lu Shu, watched the news every day, worrying about his mother in the isolation ward.

"Whenever I contact him through video calls, I always tell him I am safe here and I hope he can overcome the difficulties like I do, by studying hard and practising well," Wu says that her son likes playing football and has been training at youth clubs in Hunan Province since he was five years old. This year, due to the temporary shutdown of outdoor training after the outbreak, Lu Shu has been forced to exercise at home.

Wu said that after watching the 2018 World Cup, Lu Shu told his parents that he wanted to be a self-disciplined and versatile athlete like Messi. Wu and her husband have always supported their son's dream, encouraging him to try his hardest at something he loves.

In addition to a Messi jersey, Lu Shu will also receive another gift from his training club, Tengyo Sports. The club said that Lu's registration fee will be waived and he will receive a training session led by Spain's Rodrigo Enrique Azocar Diaz, a UEFA Level A-certified coach.

According to Tengyo Sports chairman Tan Di, the company announced on March 2 that the children of medical workers would be able to take part in a free weekend football class for one semester in 2020. Meanwhile, the football stadium owned by Tengyo Sports will be free for all medical staff by 2020.

"All the medical workers have been hugely dedicated and have made many sacrifices since the outbreak. I hope to contribute the strength from the sports industry to the nationwide fight against the epidemic," Tan said.