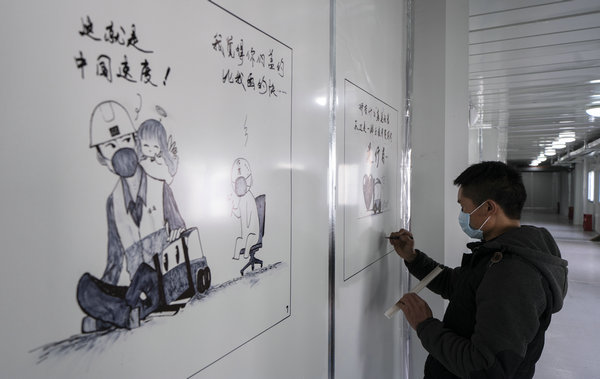 A construction worker draws on the wall of Leishenshan Hospital, a makeshift hospital in Wuhan, to encourage his fellow workers and medical professionals in the fight against the COVID-19 epidemic, on Wednesday. [Xinhua/Fei Maohua]

DALIAN — Lovely cartoon pictures drawn on the walls of a ward in a makeshift hospital in Wuhan have proved popular online.

Oysters and hot dry noodles, as well as the Dalian Railway Station and Wuhan's Yellow Crane Tower are among the pictures representing the two Chinese cities.

Liu Yu, a nurse at Leishenshan Hospital in Wuhan, is one of the artists of the more than 30 murals adorning its walls. She is also one of the 500 medical personnel sent to Wuhan, the city at the epicenter of the novel coronavirus epidemic, from Dalian on Feb 8 to aid local colleagues in treating patients and containing the spread of the virus.

"I started to draw a cartoon on the corridor wall of ward A2 in Leishenshan. That helped relieve my pressure after a day's work," says the nurse. "Colleagues and patients started coming to see the pictures. I never expected them to become so popular." 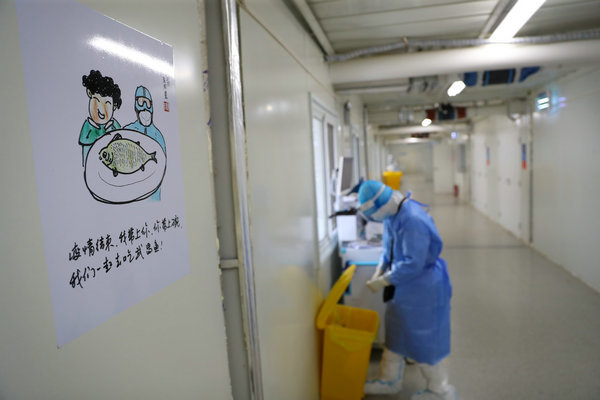 A cartoon picture and an encouraging message on a wall of Huoshenshan Hospital, another makeshift hospital in Wuhan. [China News Service/Zhang Chang]

Liu's first cartoon depicts anthropomorphized oysters, for which Dalian is famous, encouraging a bowl of Wuhan's renowned hot dry noodles to stay strong with the message: "Wuhan, please hang on!"

"I used the signature food of my hometown to show our support for virus-hit Wuhan," says Liu.

Many of Liu's colleagues, who used to draw pictures and write messages on their protective suits to cheer their colleagues and patients up, also joined in.

Doctor Wang Wei from Dalian drew a picture of the Dalian Railway Station and Wuhan Yellow Crane Tower. "They symbolize the 'heart-to-heart' solidarity between Dalian and Wuhan people."

Among the murals that has touched Wang and other medical staff the most is a portrait of Zhong Nanshan, a renowned Chinese respiratory specialist, with the words: "Wuhan is a heroic city, and people of Hubei and Wuhan are heroic people."

"Everyday, we are impressed by the heartwarming strength of the Wuhan people," says Liu. "I still remember the first day when I arrived at Leishenshan Hospital. A local shuttle bus driver bowed very low and expressed his appreciation toward us."

Tiger Beach Ocean Park, Xinghai Square and other pictures of famous tourist attractions in Dalian have emerged on the wall in recent days. "This is a travel itinerary we make for patients. I hope they can visit these famous landmarks in my hometown after they recover," Liu says.

"When I drew the Yellow Crane Tower, I made a decision that I would visit the tower and enjoy the beautiful scenery of this heroic city after the epidemic ends," says Wang.