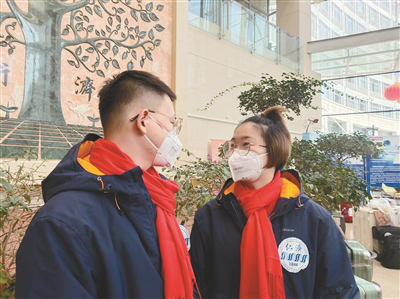 A young couple working as nurses at Renji Hospital attached to Shanghai Jiaotong University marries at the Leishenshan Hospital in Wuhan, Hubei Province on February 28. [pdtimes.com]

The couple had originally planned to have their wedding on February 28, but they were dispatched to Wuhan to aid local hospitals on February 19.

The wedding lasted around 15 minutes, with the bride and bridegroom wearing their Renji Hospital uniforms and face masks throughout the ceremony

Zhang Jidong, deputy director of Renji Hospital and the leader of Shanghai's eighth medical aid team to Hubei, acted as the father of the bride and witness to the wedding.

Wang Xinghuan, Party chief of Leishenshan Hospital, acted as the father of the bride groom. He said this was the simplest wedding ceremony he had ever witnessed.

The wedding was also attended by representatives of 12 medical teams from throughout the country, who acted as the couple's friends and family, as well as more than 500 medics from the Shanghai medical team, who watched the wedding on their mobile phones.

Xia Qiang, Party chief of Renji Hospital, and Fang Jingyuan, deputy director of the hospital, congratulated the couple from Shanghai.

"Being able to fight together on the frontlines in Wuhan is much more unforgettable than having a grand wedding ceremony and romantic honeymoon," said Zhou Lingyi, the bride.

"We want to thank our colleagues from both Renji and Leishenshan for giving us such an 'unordinary' wedding. I believe the epidemic will soon be under control and we will make a triumphant return to normalcy," added Zhou.