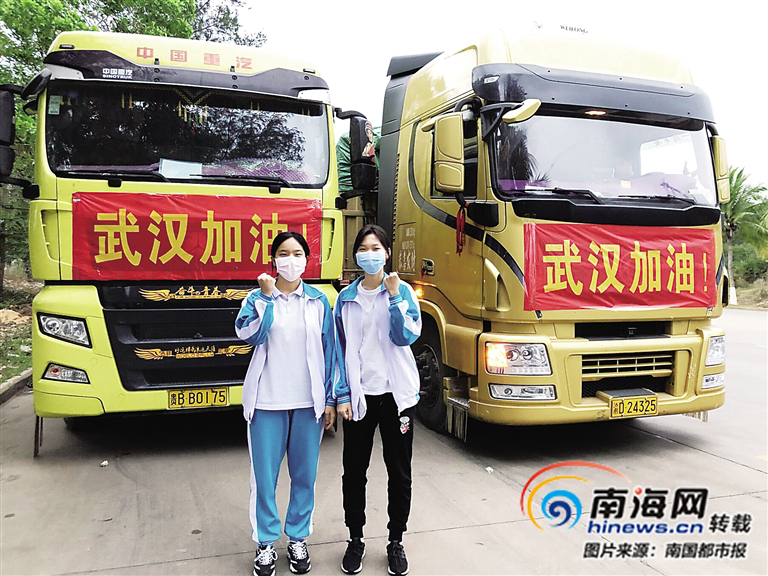 Zheng Wenyu (L) and her classmate pose in front of the trucks, which were packed with fresh vegetables from Hainan that will be donated to Wuhan. [hinews.cn]

A special donation of 60 tons of fresh vegetables from Hainan reached Wuhan's Qiaokou District on February 11 and will hopefully start to be distributed to local hospitals and residents the following day.

Differing from other donation suppliers, this donation did not come from government departments or charity organizations in Hainan, but through a fundraising event organized by three students from Hainan Middle School.

After the outbreak of the novel coronavirus epidemic, Zheng Wenyu, a sophomore student, was concerned and wanted to do something for Wuhan, the area most affected by the epidemic, and for the farmers in Hainan whose sales of agricultural products were affected due to suspension of markets.

"I thought maybe I could raise money to buy some vegetables from Hainan farmers and donate them to Wuhan," she explained.

With the support of her parents, Zheng and her classmates Ye Qianqiu and Zheng Xuan teamed up on February 7 to launch an online fundraiser, calling on their relatives and friends to participate.

With the help from Hainan's poverty alleviation department, Zheng used the fund to purchase 60 tons of pumpkins and white gourd from farmers in Changjiang and Lingao, and packed them in trucks before being shipping out to Wuhan.

"With the help of the students, my vegetables were finally sold, which helped me avoid a lot of losses," said a local farmer from Changjiang, praising the efforts of Zheng and her classmates.

A truck packed with pumpkins and white gourds from Hainan arrive in Wuhan on February 11. [hinews.cn]

Pumpkins donated by Zheng and her classmates are unloaded from a truck in Wuhan on February 11. [hinews.cn]