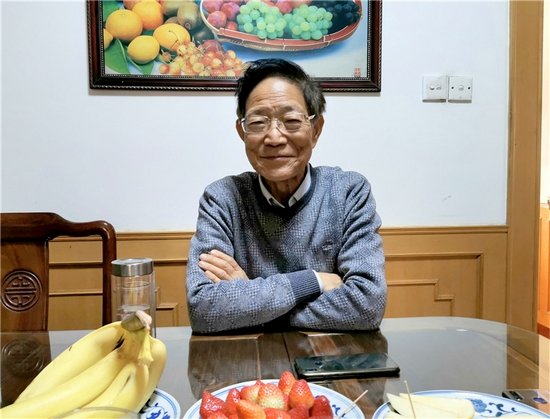 Inside an undistinguished house in the grounds of a university in Zhengzhou, Henan Province, the humble decor and furniture give no clues that the occupant is a multimillionaire.

This month, Wang Zelin, owner of the house in the residential community of Henan Agricultural University, donated 82 million yuan ($11.82 million) to the university.

"I hope the money can be used to build a biological safety protection third-level laboratory, or P3 laboratory, which is needed for research at the university," Wang said.

The 77-year-old retired professor accumulated the fortune by transferring the patents and invention certificates of veterinary drugs to companies who put them into production.

His decision to make the huge donation, which has made ripples outside of academia, has won support from his family. His wife Wang Wumei, 71, who has also retired from the university, said they made the decision together. "Building a lab has a big significance for scientific development," she said.

Wang Zelin, who calls himself "the doctor for horses, cattle and chicken", attributes his achievements to the country's reform and opening-up since 1978 and the support of the university.

He embarked on his research work in poultry disease prevention in 1984 when he joined the university.

In the early 1980s, China saw growing development of the poultry sector, but breeders had long been challenged by various diseases, and the vaccines were mainly imported. Each year, huge amounts of money were spent on the imports.

The situation prompted many researchers, including Wang Zelin, to work on domestic solutions to prevent poultry diseases.

However, unlike others, he didn't apply for public funding. Instead, he chose to cooperate with companies, a model that has proved a success.

Between 1985 and 1995, he accumulated more than 4 million yuan by providing services to breeders to treat poultry diseases.

The university allowed Wang Zelin to earn income from part-time consulting work, which often dovetailed with his field research work.

Wang Zelin spent the money building two labs at the university, and buying advanced equipment for scientific research and development and for teaching purposes.

Yan Nuoqian, the first postgraduate student tutored by Wang from 1994 to 1997, said Wang Zelin's largesse was during a time of low wages for teachers.

"When a teacher's salary was less than 100 yuan a month, my tutor spent 16,000 yuan buying a PCR device to let us do scientific tests, which was the first of its kind in our school," Yan said. Polymerase chain reaction devices are used in molecular biology to study specific segments of DNA.

In 2005, five new vaccines Wang Zelin invented generated another 5 million yuan after the invention certificates were transferred to companies.

He then spent 2.3 million yuan upgrading the university's labs and donated 1 million yuan to the poultry branch of the Chinese Association of Animal Science and Veterinary Medicine to found an innovation fund.

Usually, it takes five to eight years to invent a new drug, but Wang Zelin is hardworking and productive. Since 1984, he has been granted three invention patents and 12 invention certificates for new veterinary drugs.

He and his team have also set up a bank of major poultry viruses and developed vaccines that can prevent several major poultry diseases.

"He came to the lab at 6 am and usually stayed in the lab for a whole day to do tests," said Wang Yongsheng, one of his students.

"When he was in hospital due to gastric disease and diabetes, he continued reading."

Zhang Longxian, a professor at Henan Agricultural University, said: "Professor Wang also has rich field experience. He frequently went to farms to obtain the latest data on chicken, such as what diseases the chicken succumbed to. The field experience allowed him to develop market-oriented drugs."

Wang Zelin's research achievements have been put into production by more than 20 companies. These achievements contribute over 10 billion yuan in economic benefits every year, according to Henan Agricultural University.

In 2015, two companies purchased the invention certificates of two of Wang Zelin's new drugs. According to the purchase agreements, Wang Zelin can cash in 8 percent of the annual sales of the drugs for 12 years.

Last year, he donated the proceeds to the university to establish a scientific research and innovation fund.

"With the fund, I hope more young teachers can create more achievements in the agricultural sector," Wang Zelin said.