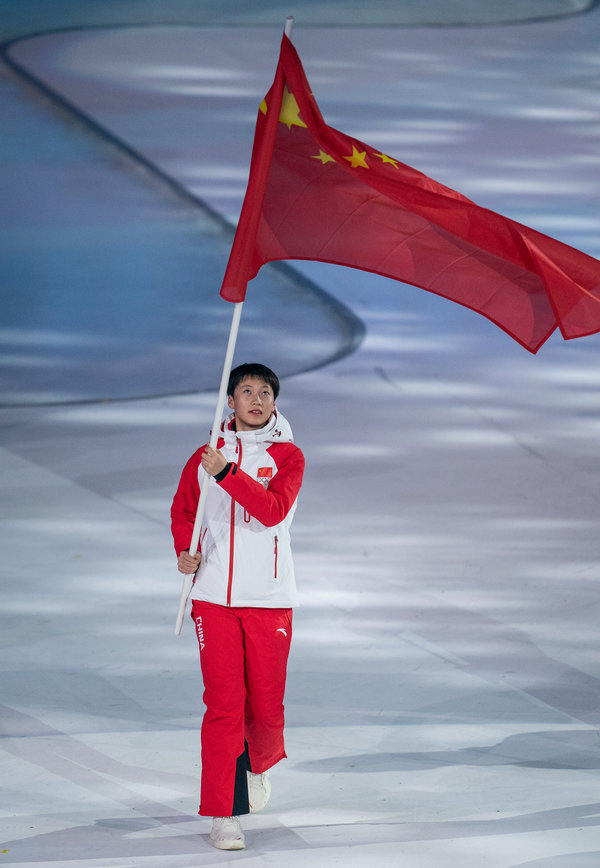 Ding Yuhuan, flag bearer of the delegtion of China, marches during the opening ceremony of the 3rd Winter Youth Olympic Games held at Vaudoise Arena in Lausanne, Switzerland on Jan. 9, 2020.[Bob Martin/OIS/Handout via Xinhua]

Chinese biathlete Ding Yuhuan has set sights on the Beijing 2022 Winter Olympic Games despite a dissatisfactory result at the Winter YOG.

Ding finished 30th among 97 competitors in the women's 10km individual race on Saturday.

"She has great potential, and is riding on a wave of growing momentum in her career," said Jiang Yang, who took charge of the Chinese biathlon team during the Games.

For Ding, the Youth Olympic Games is the same way as the Olympic Games, which is a grand event, making her quite honored to step on it.

The best part of Ding's memory about the Games may come from her role as the flag bearer of the Chinese delegation.

"It's a great honor to carry the flag for China," she said. "When I got the news of being the flag bearer, I was quite happy and honored at first, then I felt a little bit nervous. After all, it was my first time to take up this role."

Ding claimed four golds in the biathlon competitions in the China Youth Games.

"It was relatively a smooth journey for me over the past two years. Thanks to my coach, I've been improving all the way, and achieved some good results in national tournaments."

But international competitions were another thing to the promising Chinese biathlete.

"She didn't participate in many international competitions before, thus lacked the relevant experience," Jiang pointed out.

"I have gained experience from this match. Hopefully I can do better in the next," Ding mentioned.

"A clear difference is that I face tougher challenges from strong competitors of other countries. The snow condition here is better, and crowds are quite enthusiastic," she added.

Ding trained for one month in Finland last year, which she thought helped her better adjust to snow conditions in Europe en route to this tournament.

"She is currently among the best junior Chinese biathletes," Jiang pointed out.

Ding also boosted her confidence in representing China at the 2022 Winter Olympics on home soil.

"Many Chinese athletes older than me are quite strong. Hopefully, I can better them in the upcoming two years," she commented.