Designer Leaves Her Stamp on 70 Years of New China 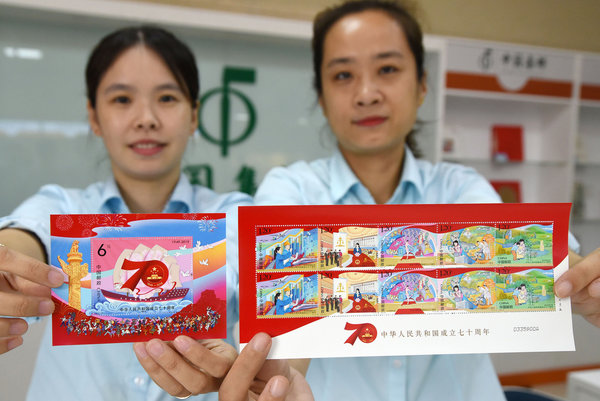 China Post workers display stamps designed by Yuan Yishan, commemorating the 70th anniversary of the founding of the People's Republic of China on Oct 1. [Photo by Hao Qunying/For China Daily]

Yuan Yishan, a designer and engraver in her late 30s, works with the Postage Stamp Printing Bureau of China Post.

During her childhood in Shandong province, Yuan's father worked at a printery next to the local post office.

"My father was fond of collecting stamps and often took me to weekend markets to exchange stamps with other collectors," Yuan said.

Her father died two weeks before her college entrance exam. All he left to the 19-year-old Yuan was a box of stamps.

Earning the highest academic test score in the country, Yuan entered the predecessor of today's Tsinghua University Academy of Arts and Design to study painting and sculpture. She did not realize that her future would be so closely linked to stamps, but the connection would soon take off.

On Oct 1, China Post issued stamps commemorating the 70th anniversary of the founding of the People's Republic of China. Yuan was the designer. The five-piece set presents China's coordinated economic, political, cultural, social and environmental advancement.

The stamps feature the Chinese people and reflect the idea of them sharing in the accomplishments of China's development. Yuan used red, pink, purple and blue to depict colorful images. 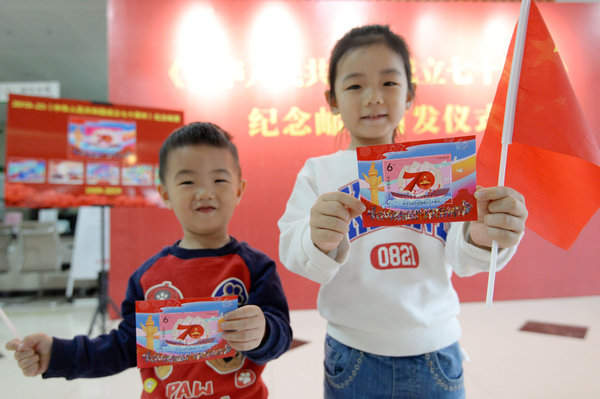 Children display stamps designed by Yuan Yishan, commemorating the 70th anniversary of the founding of the People's Republic of China on Oct 1. [Photo by Hao Qunying/For China Daily]

New China is young and vigorous, Yuan said. "In my view, China is like the stamps－colorful and gorgeous," she said.

"I was born at the beginning of reform and opening-up, and have personally experienced the changes brought to China over the past 40 years. The prosperity of the country can enable each and every Chinese to live a happy life when the government has done so much to benefit many aspects of our lives."

"Now, as a mom, I feel the same. I hope my child will grow up in a prosperous era, and genuinely hope my country will be prosperous and our people happy. Designing these stamps allowed me to express that hope," Yuan said.

The workshop marked the first time that China had invited a famous overseas engraver to host a training class in the field since 1949.

At the end of the seven-month course, Yuan's engraving works received the highest score.

"She is very talented. In her own style, she presented Chinese elements in her work," the Dane recently told Xinhua.

"There is so much power in her, and she can do a lot more beyond her limitations," added Morck, now a guest professor at Tsinghua.

Stamps are important in China, even though many countries no longer attach as much importance to stamp engraving due to the rise of the internet. "China stands strong in the field," Morck said.