A saying goes that love knows no age. One example is what happened between the 96-year-old grandfather Han and the 85-year-old grandmother Wu in Wuhan, Central China's Hubei Province.

Their romance can be traced back to Spring Festival in 2017, when they met at their children's gathering for the first time, according to Changjiang Daily. They had been living alone since their spouses died. Their children, who happened to be friends, had worried about their parents' loneliness and decided to fix them up.

Han thought Wu was nice after the meeting and decided to pursue a relationship with his children's support. He sent Wu a fan during the hot days and roses on her birthday, and also talked with her over the phone from time to time. Wu gave him a pair of sneakers after noticing that he wore leather shoes all the time, and Han would wear them whenever he went to meet her.

Han lived in a 130-square-meter house before meeting Wu. He planned to invite her to move in, but Wu didn't want to leave her apartment at the Social Welfare Institute of Wuhan in Jianghan district, where she had been residing for four years. So Han moved to the institute, into an apartment across from Wu. He would call her every morning and they would eat three meals together.

On Nov 1, 2018, the two tied the knot. Han gave Wu a one-karat diamond ring at their wedding ceremony.

The institute arranged for them a suite, which has turned into a cozy home with their careful arrangement. Han's books, newspapers and magnifying glasses and Wu's handwork sit on the desk, while Han's favorite calligraphy works hang on the wall.

Wu learns singing during the day and Han reads newspapers. When he plays Chinese chess, she sits and watches him. Sometimes they do handwork together, watch the TV news and order takeout food.

Han said he did astronomy research when he was young and Wu did oil exploration, both areas requiring field work, so they have a lot of common topics to talk about every day.

On Thursday afternoon, they shot their wedding photos at the garden of the Social Welfare Institute. Han said, "I'm so happy." 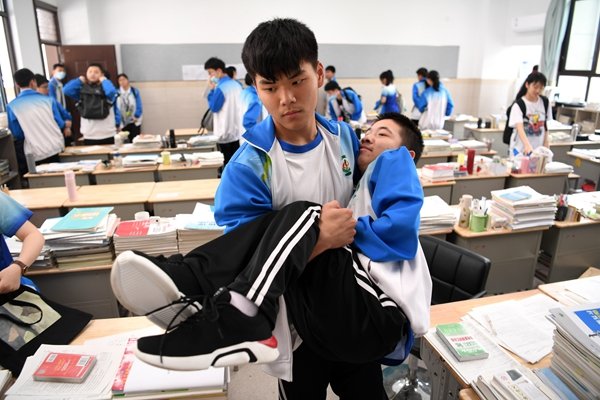