Slicing into the Future 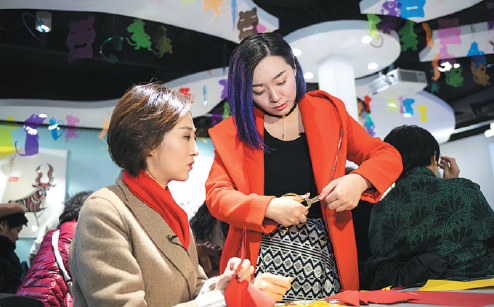 Li Shiyi instructs a young participant in her paper-cutting course in her studio in Shanghai. [For China Daily]

A father and daughter seek to popularize traditional Chinese paper-cutting.

After folding a piece of red paper in half, Li Shiyi carefully trims off a portion before unfolding the paper to reveal an auspicious design of two mice holding a gourd.

"The mouse is one of the Chinese zodiac animals, and the gourd represents great fortune," says Li.

It takes two minutes to turn an ordinary piece of paper into an outstanding artwork.

Li, 29, is among the few remaining artists of traditional Chinese paper-cutting, an intangible cultural heritage that was first documented by historian Sima Qian 2,000 years ago.

"I want to revive this form of art and popularize it among today's young people," Li says, when asked about her motivations behind choosing this line of work.

Li and her team, known as Yixiang Tiankai, work in a three-story shikumen-style house in Tianzifang, a historical tourist attraction in the old town of Shanghai that was converted into a studio. The first floor sells various art souvenirs. The second floor is used as an exhibition space and a classroom for paper-cutting, and the third hosts office spaces.

The studio offers a variety of paper-cutting courses for children, young people and foreigners.

To attract tourists and company workers, Li and her colleagues launched team-building programs as well as short courses that span from one to two hours.

"We want to break the stereotype that Chinese paper-cutting is outdated and that its designs are limited to 'double happiness' characters. I teach people to create designs based on their own ideas," she says. "Paper-cutting may be traditional, but it can also be fashionable."

Li was born into a family of artists. Her grandfather, Li Tingyi, was an art designer for the Shanghai Wave magazine in the 1960s and one of his paper-cutting works was published in a pictorial magazine in the Soviet Union.

Her father, Li Shoubai, is an award-winning painter and a municipal-level inheritor of the Shanghai-style paper-cutting technique. His works have been exhibited at home and abroad, in countries such as France, Austria, Japan and Singapore.

Li Shiyi learned painting and paper-cutting from her father when she was a child. She continued to hone her skills in these areas even when she was studying law in college. She later earned a master's degree in art at the University of Westminster in 2015.

"My father is purely an artist. I, on the other hand, have focused more on the business side of things," she says, adding that she has been responsible for efforts in expanding the family business since she graduated.

Today, 58-year-old Li Shoubai works on the fifth floor of A-Zenith, a company in Shanghai that specializes in retro-style furniture from 1900s Shanghai.

In a partnership with the company, Li Shoubai gets to use half of the level as his studio. In return, he helps the company to design furniture and decorative elements.

Li Shoubai learned painting and paper-cutting from his father before leaving the country in the 1990s to work as a painter for a company in Singapore.

During his time in the Southeast Asian country, he developed a passion for painting subjects related to old Shanghai.

"Shikumen-style buildings, women in cheongsam, the Huangpu River and Suzhou Creek — these are the subjects that I feel the most about," says Li Shoubai.

Paper-cuts by Li Shiyi and her father, Li Shoubai, feature cultural icons of Shanghai, such as the shikumen buildings and women in cheongsam. [For China Daily]

"It was during my time in Singapore that I realized that an artist can only inject life into his art when he creates something based on his own life experiences."

Li Shoubai returned to Shanghai after the turn of the millennium and eventually created his own style of painting, which features a strong contrast of colors and a mix of Chinese and Western watercolor techniques. He also experimented with blending wood-cutting styles into his paper-cutting creations, which were often of traditional Chinese symbols and modern architecture.

"Through my work, I want to pass on the traditional paper-cutting technique in the context of metropolitan Shanghai," he says.

Li Shoubai also views his daughter as a means to promote traditional paper-cutting to the world.

To achieve this, he has been sending her abroad to gain experience and hone her language skills.

The father-and-daughter duo have promoted the art form in many international events over the years. Some of the notable events include the 2012 World Expo in the Republic of Korea, the 2017 World Expo in Kazakhstan and the WorldSkills Kazan 2019 in Russia.

"What we are doing now is making paper-cutting a popular culture again. Paper-cutting art should not be limited to museums or passed down only among inheritors," he says.

"With just a pair of scissors and a piece of paper, everyone can enter the world of traditional paper-cutting."