Sign in  Register
Give Your Comments
NewsletterClose
People / Inspiring Females

Tickets for actress Zhang Huoding's latest performance in the classic Peking Opera Farewell My Concubine sold out fast, as they have done for all her shows in China.

The performance will be staged at the Chang'an Grand Theatre in Beijing on Friday, in response to demand.

Tickets, which cost from 100 yuan to 1,080 yuan ($14 to $155) and went on sale on January 5, were all snapped up by noon. According to the online sales platform Damai, each buyer could purchase only one ticket with their ID card.

On May 25, when the show was staged at the 19th Meet in Beijing Arts Festival, tickets also sold out within a few hours, according to Mu Wen from the China Arts and Entertainment Group, which organizes the annual event－one of the largest arts festivals in the capital.

An audience of more than 1,000 watched the show at the Chang'an Grand Theatre, with many people leaving messages online asking for Zhang to appear in more performances.

Netizen "Doudou", a 24-year-old Shanghai native who watched Zhang perform in Farewell My Concubine on Oct 26 at the Shanghai Grand Theatre, said, "I am intrigued by her craft as a Peking Opera actress, which is just as I imagined it to be."

Veteran actor Zheng Rong, 95, who watched the Beijing show on May 25 from his wheelchair, said: "It's great to watch her perform－I cried. Thankfully, Zhang and her team are keeping Peking Opera alive."

Fu Jin, a professor at the National Academy of Chinese Theater Arts, said: "Zhang Huoding is phenomenal. It's hard to believe that a Peking Opera actress can be as popular as a pop star. Many of her fans are young people.

"With such traditional genres facing challenges from contemporary forms of entertainment, it's valuable to have such a great actress, who tries her best to let more people know about this genre."

Known as jingju in Chinese, Peking Opera is more than 200 years old. It combines singing, dancing, martial arts and acrobatics. UNESCO declared it an intangible cultural heritage in 2010.

Zhang, who will be 49 on January 24, had the idea of adapting Farewell My Concubine more than 10 years ago. About a month before the show in Beijing on May 25, she announced in a rehearsal room at the National Academy of Chinese Theatre Arts that she would appear in the performance.

She was excited and kept smiling, although she kept her comments brief.

"I'd been dreaming about adapting the piece for over 10 years. I loved the performances of Mei Lanfang and I deeply respect him," Zhang said, referring to the late Peking Opera master.

Farewell My Concubine, which tells the love story between Xiang Yu, a warlord from the Chu Kingdom, and his concubine, Yu Ji, is one of the best-known Peking Operas.

In 1922, Mei (1894-1961), along with Yang, performed the piece, which later became one of the best-known works in Mei's repertoire. It is also regarded as a classic work from the "Mei School", the performing style he developed.

Fu said that at one time it seemed impossible that the show could be adapted for Zhang, as she was trained by Peking Opera master Zhao Rongchen and had kept up the traditions of the "Cheng School". Developed by Cheng Yanqiu (1904-58), this school was one of the four major performing styles of the genre to emerge in the early 20th century.

Like Mei, Cheng mastered the techniques of men playing female roles, known as nandan. The Cheng School is known for interpreting tragic roles for women with frequent changes in rhythm.

"The two styles of tones, gestures and movements are very different," Fu said. "Zhang had to make lots of changes, challenging both tradition and herself."

To everyone's surprise, Zhang even changed one of the best-known scenes in Farewell My Concubine, in which Yu Ji dances with two swords.

In Mei's signature creation, Yu dances in this scene with Xiang's sword on their last night together before she uses the sword to kill herself.

Unlike Mei's version, in which the swords did not have tassels, Zhang added two long red ones attached to the swords in her interpretation, making her performance more impressive, but difficult.

Fu, a friend of Zhang's who reviews her shows, said, "Her dress had many ornaments, such as pearls and raised embroidery, which became entangled with her swords' tassels as she turned around waving her arms."

The sword-dancing scene lasts about 10 minutes and Zhang practiced for it for a year.

"She told me that every day she practiced sword dancing at the end of her daily rehearsal because it's energy-consuming," Fu said. "It's very difficult for her to control her breathing to sing after dancing with swords. But she performed the part perfectly."

Zhang said in an interview after her performance on May 25 that she was exhausted and sweating heavily, adding, "I could do the moves better if I was 10 years younger."

Born in Baicheng, Jilin Province, she was introduced to traditional Chinese opera by her father, who performed Pingju Opera, a traditional art form popular in northern China.

In 1989, after graduating from school in Tianjin, Zhang Huoding joined a military Peking Opera troupe in Beijing, and from 1995 to 2008 she performed with the National Peking Opera Company. She now teaches at the National Academy of Chinese Theater Arts in Beijing.

Ye Shaolan, a 78-year-old Peking Opera master who performed with Zhang Huoding in the classic piece The Legend of White Snake in 2016, said: "She really loves Peking Opera. Her life is simple and although she rarely gives performances, she practices every day in the rehearsal room at the National Academy of Chinese Theater Arts."

After watching her rendition of Farewell My Concubine, Ye wrote in a People's Daily article: "Zhang Huoding designed her moves and singing totally based on the role of Yu Ji. The performance style of the Cheng School blends naturally and convincingly in her interpretation, and the show deserves to be watched over and over again."

In 2016, the National Academy of Chinese Theater Arts launched a project that enabled Zhang Huoding to mentor young female Peking Opera students performing in the style of the Cheng School. Ten actresses have been recruited.

In May, her students staged a show to highlight classic roles from the Cheng School, including Bai Suzhen from The Legend of White Snake and Zhu Yingtai from The Butterfly Lovers, at the Tianqiao Performing Arts Center in Beijing.

One of Zhang Huoding's students, Li Li, 30, said: "She told me that the only way to guarantee the quality of a performance is to practice again and again, from eye contact to breathing and movements. Although she speaks few words, she is very disciplined and always inspires us."

Li started her Peking Opera training in her hometown of Tianjin at age 7, before moving on to graduate with a master's from the National Academy of Chinese Theater Arts. She now works with the Jingju Theatre Company of Beijing.

She said that before she studied with Zhang Huoding, she was struggling, as Peking Opera was losing popularity. She even considered quitting her job as an actress.

However, in 2014, she changed her mind after watching a performance by Zhang Huoding at the Chang'an Grand Theatre. The standing ovation, which Li said was the longest she had ever seen, and the enthusiastic response from the audience restored Li's faith in the art.

"I used to be restless, as I had lost my career path as a Peking Opera actress, but now I am very calm and determined. I am touched not only by Zhang Huoding's solid technique onstage, but also by her attitude toward this old art," said Li, who sports short hair, just like her mentor.

Zhang Huoding's fame has spread beyond China. In 2015, she made her debut in the United States with shows at the Lincoln Center for the Performing Arts in New York.

Media reports compared her performances with those given by Mei Lanfang in New York in 1930. Then, as now, there was a sense that traditional Chinese opera could be popular overseas and even influence the global arts scene.

In an interview with The New York Times published on Aug 31, 2015, before she made her debut in the US, Zhang Huoding said, "Peking Opera has always had a calming effect on me." She also lamented that "the great age of Peking Opera may be coming to an end".

Performances mainly attract the older generation. Few young people decide to take up the art form as a career, as it entails a rigid training process and takes years before a young performer is ready to appear onstage.

According to the latest report by the Beijing Trade Association for Performances, some 250,000 performances of all types were staged in Beijing in 2018, attracting audiences of more than 11.2 million and grossing over 1.7 billion yuan. However, the report said traditional Chinese art forms, such as Peking Opera, are losing fans.

According to Fu, from the National Academy of Chinese Theater Arts, the government is eager to revive the art form by offering low-priced tickets and free shows. Some young artists are striving to popularize Peking Opera among the younger generation by experimenting with new technology, exploring the psychological portrayal of characters and enhancing young people's appreciation of Chinese operatic genres.

For example, Peking Opera shows staged at smaller theaters have been well-received by younger audiences. Unlike traditional Chinese opera shows, which are usually staged in large theaters with grand stage sets and large casts, the smaller Peking Opera productions only last for about one hour, involving just a few actors and a simple set.

Fu said: "Audiences do not have the patience or interest in sitting in a theater to watch two-hour-long Peking Opera shows. Companies usually present some of the best-known excerpts from traditional repertoires to give audiences a glimpse of the art form, hoping that they will return to the theater again. This is a pity, and we need more Peking Opera stars like Zhang Huoding to revive the genre." 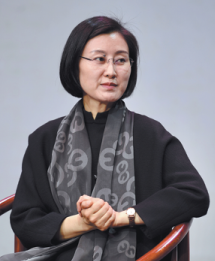 Zhang Huoding had the idea of adapting Farewell My Concubine more than 10 years ago. [For China Daily] 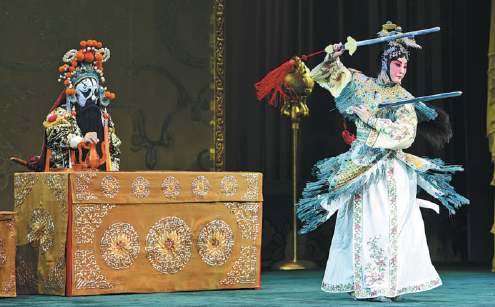 It took Zhang Huoding a year to master the sword dancing scene in Farewell My Concubine. [For China Daily] 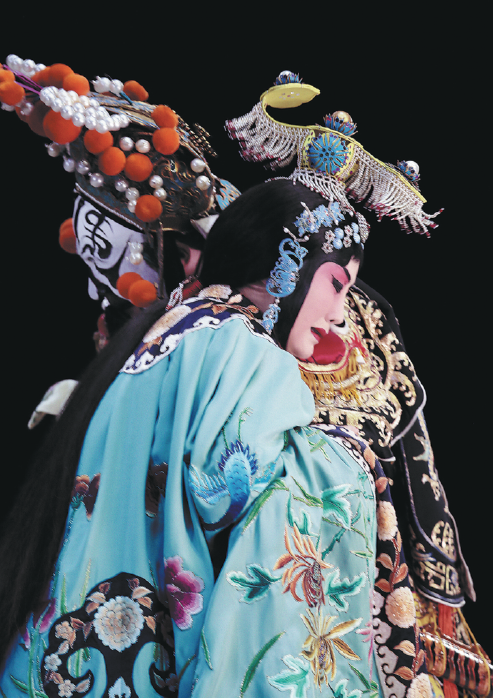 Zhang Huoding performs as Yu Ji in Farewell My Concubine. [For China Daily]