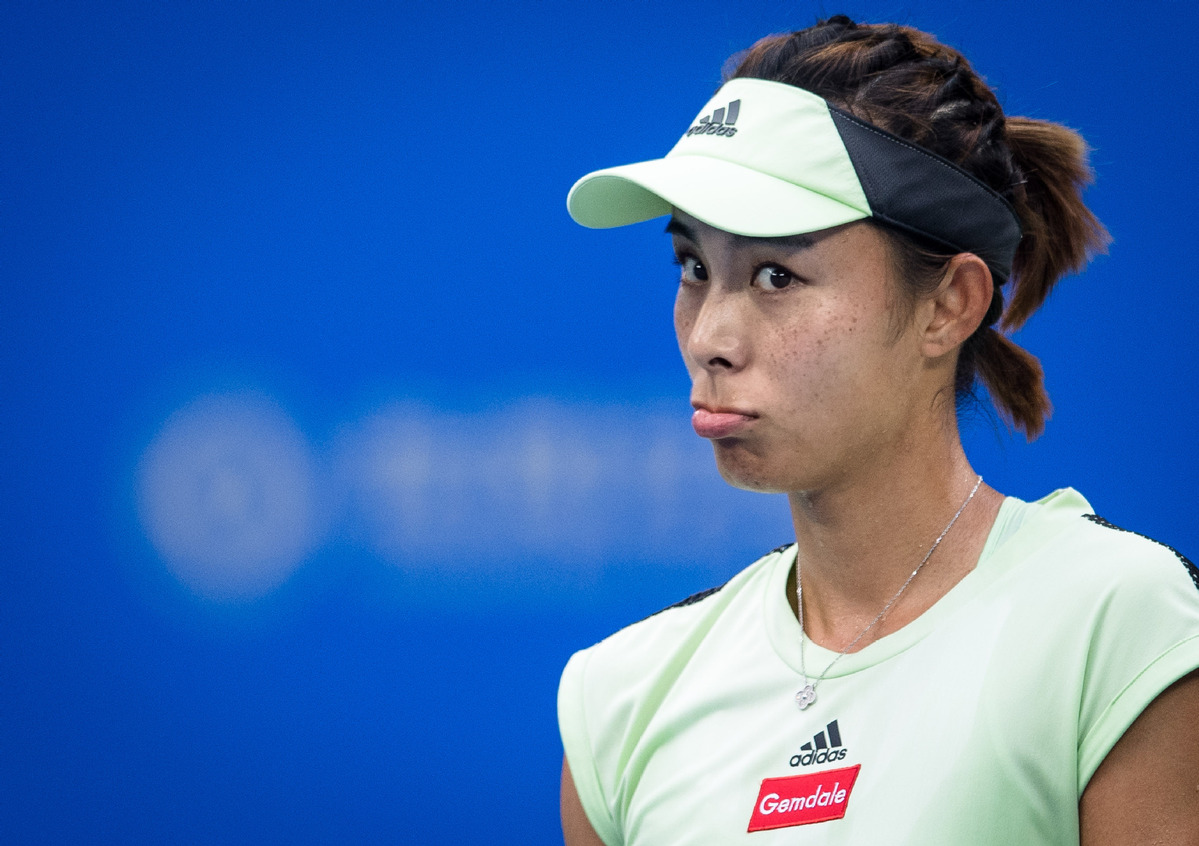 China's Wang Qiang reacts during her third-round loss to Alison Riske of the United States at the WTA Wuhan Open on Wednesday. [Xinhua]

Although Wang Qiang is almost certain to finish the season as China's No 1, the 27-year-old has experienced one of the toughest years of her career.

Nagging injuries and the death of her coach have made for a particularly difficult 2019 for the world No 16, with Wednesday's 6-2, 6-1 loss to American Alison Riske (No 35) at the Wuhan Open symptomatic of her stuttering form.

But Wang is made of steely stuff mentally, and her positive post-match attitude demonstrated a determination not to let setbacks divert her from her ultimate goal of winning a Grand Slam.

"My whole team tries to avoid letting me think too much. They don't want to focus only on how many points I have earned in the second half of the season," said Wang in Wuhan.

"After being injured this year, I haven't been in good condition. To improve I need to play more and win more."

Wang enjoyed a breakthrough season last year when she captured her first two WTA titles and reached the final of the WTA Elite Trophy Zhuhai.

However, a waist injury that she described as "a time bomb that could explode any time" put the brakes on her rapid rise up the rankings.

"The injury has been bothering me this season, which is a problem I've never faced before," Wang told China Daily in Wuhan.

"I missed many tournaments this season. The waist injury cannot be totally repaired immediately. I'm still receiving treatment and need to stay relaxed off the court. The priority is to control it.

"This has been a very tough year for me with everything that happened, including the change of my coach."

The latter was necessitated by the July death of Wang's former mentor, Peter McNamara, following a battle with cancer.

By Wang's own admission, McNamara was a key factor in her spike in form last season. The Australian's confidence in his protege was clear at last year's Wuhan Open, when he told China Daily: "The potential is there. It's about whether she can believe in herself and continue to work in a right way. I think she can. She's a fantastic kid."

"I knew he was sick, because earlier this year he couldn't stand but only sit to watch my training sessions," she said.

"I always worried about him. I was afraid something could go wrong when he sat by the court.

"He did not tell me what kind of illness he had so as not to worry me too much.

"I never thought that everything would happen so fast."

Like McNamara, Wang's new coach, Thomas Drouet, reckoned the player had some unrealized potential after being immediately been impressed with her athleticism and analytical capacity - which he described as her "two weapons".

Although it's still early in Drouet's tenure, Wang's run to the US Open quarterfinals indicated the Frenchman is the right fit.

"Before the match I knew Williams was a great player, but I didn't realize just how good she could be," Wang told China Daily.

"After the match. I was like, 'wow, she's too impressive.' It's about her strength, the way she attacks and the pressure she puts you under."

For now, Wang's focus will start to shift toward next season as she targets more deep runs at the majors.

"This year, I rested totally about two months," said Wang. "I didn't even do much rehab to recover from the injury. For non-athletes, two months sounds not too long. For us pros, it's a very long time. And it's hard to return to my peak condition after that. I believe things are getting better, and I'm trying to rediscover the best me."