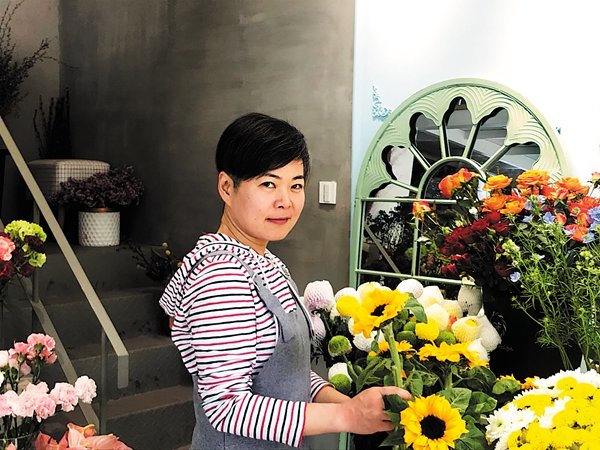 Millions of roses were to be sold to lovers across China ahead of Valentine's Day this year. Instead many flowers were burned near plots where they grew in Yunnan Province.

The COVID-19 outbreak caused Dounan Flower Market in Kunming, the provincial capital of Yunnan, the largest fresh-cut flower market in Asia, to shut down its on-the-spot business between sellers and buyers around Spring Festival in late January.

Even though business resumed a month later, this year's February 14 sale was missed, the most valuable season for the country's rose industry.

Zheng Wujin, a technical instructor in Yunnan's flower market, says the burning of roses turned a three-month effort to ashes.

The price of flowers differs each day, reaching the highest on Valentine's Day.

"Growers have to cut out the roses once they bloom to make space for the next batch. If the roses are left rotting in the fields, they will attract insects and infect other roses, so they have to be burned," Zheng adds.

A group of volunteers in Hangzhou, Zhejiang Province, has set up a store on e-commerce platform Taobao to help Yunnan's growers sell their roses since February 11.

More than 4,000 medical workers in Wuhan, Hubei Province, the epicenter of the epidemic, received forget-me-not flowers from the volunteers on March 8, International Women's Day.

"We wanted to send our love to the doctors and nurses, and hope that the fresh flowers reminded them of spring," says Wu Xiaoyi, 48, the group leader.

Wu, a resident in Hangzhou, has been following the coronavirus news since Spring Festival. She heard about Yunnan's rose situation on WeChat.

"I could help to set up an online store for the flower growers because I was an entrepreneur once," Wu says.

If it weren't for the COVID-19 situation, the roses would be sold to stores across the country at 15 yuan apiece. Online, they sold on average, 40 roses for 66 yuan, which could just cover the costs of the growers and the shipment.

Within a few hours of the online store opening, more than 300 orders were received. At first Wu and the other volunteers wrote the information related to the orders on excel sheets and sent them to Yunnan. Then they waited for the shipment numbers before sending the flowers to the buyers.

Gao Huayi, a friend of Wu's from whom she had first learned about the problems Yunnan's rose growers faced, was in charge of the logistics for the store.

Gao connected with Zheng, who in turn spoke to the local growers and asked them to pack the flowers and send them to the delivery addresses. As orders increased, two more volunteers with e-commerce experience joined to make the work more efficient.

On the morning of February 13, thousands of orders were received. Wu had to temporarily close the online store to deal with it all.

"We needed to make sure that we completed the orders first before reopening the store," she says.

The orders came after one buyer shared the store's story on Sina Weibo, which was reposted by netizens more than 10,000 times. On Valentine's Day, two top search topics on the micro-blogging site were "one million roses destroyed" and "the lady from Hangzhou who sells flowers to help the growers."

The posts also drew questions and negative comments. Some buyers complained the flowers were damaged during shipment, while others said the flowers were hardly trimmed and cleaned-in a rougher shape than those sold in flower stores.

Wu says buyers can get a refund if more than 10 percent of their flowers are damaged.

As to the latter complaint, Zheng explains that the flowers are sent directly from the fields, which means they are likely to be fresher than those sold in stores, and buyers can easily deal with the trimming and cleaning themselves.

Wu says she has received many photos from buyers showing the roses in blossom in their homes. "It's amazing how much comfort flowers can bring to people."

The photos also encouraged Wu to continue with the project.

"For people in cities, buying flowers means being romantic, while for the growers in Yunnan, selling them means livelihood," Wu adds.

By March 14, the group's donation of 100,000 yuan were used in two ways-80 percent was donated to the China Organ Transplantation Development Foundation to buy vacuum cups and sanitary towels for medical workers in Wuhan and 20 percent to buy forget-me-not flowers to give them. "One reason we chose the forget-me-not is that the flower is easy to keep, which won't take too much time of the medical staff," Wu says, adding that she was touched when the foundation sent her photos of medics with the flowers.

Wu says for a long time she couldn't understand why her mother, who was a doctor, left her as a child and went to the Xinjiang Uygur Autonomous Region to help local hospitals. "Now I finally know and I am so proud of her."

At the peak of orders, Wu's team had around 30 volunteers to assist the online store. Since the donation was made, some have left because they felt the purpose of helping the growers had been fulfilled.

Wu says there is still a lot she can do to both help the growers and medical workers.

"There are different species of flowers that cannot be sold year-round, and Yunnan's local growers may need a hand with the online sales," she says.

"Looking back at my experience of selling flowers online and working on the donation, I can see there were many obstacles that seemed impossible to pass, but we did it."

Now, Wu plans to continue running the store with other two volunteers and cooperate with charities to launch a flower foundation-to send flowers to medics across China.