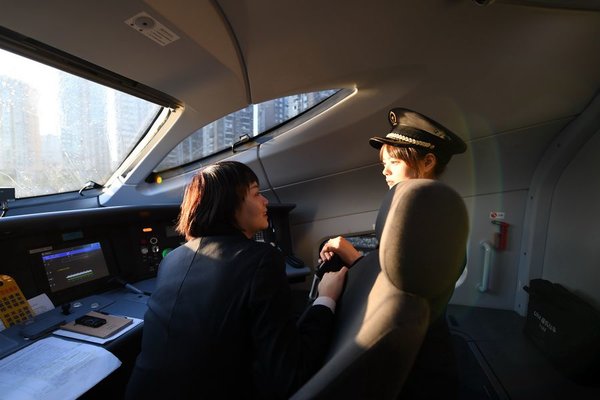 Xiao Lihua (L) talks with a colleague on a train on January 8, 2019. [Xinhua/Lin Shanchuan]

Xiao Lihua, 26, will be one of China's first batch of female bullet train drivers, after undergoing a three-year training program.

FUZHOU, January 14 (Xinhua) — At about 5 a.m., Xiao Lihua got up and put on her uniform before rushing to the train yard for a breathalyzer test — a must-do before a bullet train driver embarks on a journey, which can reach speeds up to 300 kph.

At 8:16 a.m. sharp, the train, carrying over 1,000 passengers, left Fuzhou, the capital city of east China's Fujian Province. Their destination is the southern city of Guangzhou, about 900 km away.

Xiao, 26, will be one of China's first batch of female bullet train drivers, after undergoing a three-year training program.

For Xiao and her peers, this January is especially critical as they embrace their first "chunyun," or Spring Festival travel rush, as assistant drivers.

About 3 billion trips are estimated to be made during this year's 40-day travel rush from January 10 to Feb. 18, according to a forecast from the National Development and Reform Commission (NDRC). With flooding passengers, it is challenging for every driver to be efficient and punctual.

As the assistant driver, Xiao is not yet allowed to drive by herself. She is responsible for checking signals and communicating with staff on board and those at the stations. 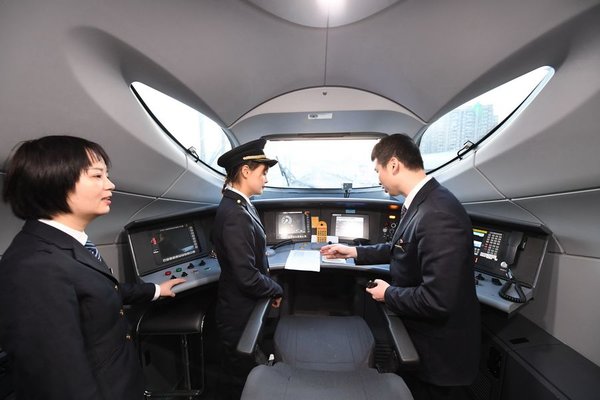 Xiao Lihua (L) talks with colleagues on a train on January 8, 2019. [Xinhua/Lin Shanchuan]

In the past, the position of train drivers was dominated by men, when the job was sort of labor-intensive. But now with the help of technology, the job requires less strength but more expertise.

In May 2019, China launched a program to establish the country's first squad of female bullet train drivers. In the Fujian branch of the China State Railway Group Co., Ltd., 17 women, including Xiao, were selected to join the existing fleet of 4,000 male drivers.

Majoring in electronic and electrical engineering in college, Xiao worked as a coach attendant for a year, before taking the position as a mileage clerk for another five years in the railway company.

"I was not happy with my previous jobs because they required little expertise and had nothing to do with what I'd learned in college," said Xiao, who immediately applied for the program after learning about the recruitment.

"Now I am a big step closer to my childhood dream of driving a train," she said.

But being a modern train driver is not easy. To steer a train, the trainees have to go through multiple tests on regulations and technical know-how of high-speed trains, as well as at least two years of internship in the cab. Xiao is halfway through her internship. 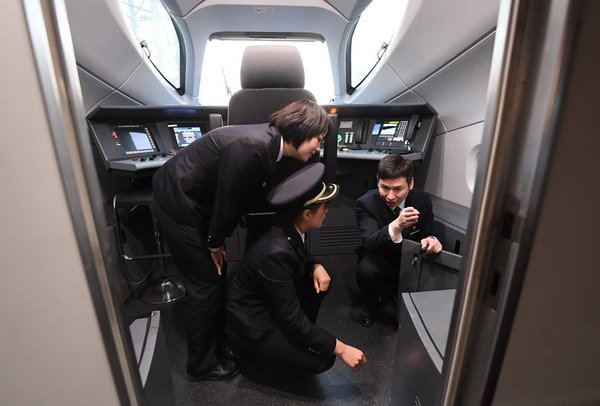 Xiao Lihua (L) talks with colleagues on a train on January 8, 2019. [Xinhua/Lin Shanchuan]

After rounds of tests, only 12 out of the 17 female trainees qualified for the job.

It is not the first time China has had women train drivers. As early as March 1950, Tian Guiying, born in 1930, became China's first female train driver as the steam train she rode chugged out of Dalian railway station, northeast China's Liaoning Province.

In the 1970s, several teams of female train drivers were set up, but all of them gradually quit the backbreaking work after about a decade.

Now a new generation of female train drivers is on the rise. 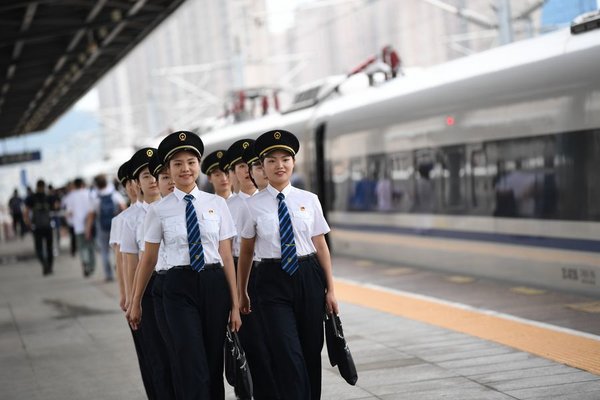 "Women are more meticulous and patient, giving them an edge as a bullet train driver," said Lyv Xiangyang, 48. As a veteran train driver, Lyv has trained over 600 drivers in his career. But it is the first time he ever had a female apprentice.

Lyv said he had to be strict with his female students because they are only given three years to pass all the tests as China is quickly expanding its high-speed rail network and in urgent need of more drivers. The traditional process takes usually five to six years.

"It means they have to work twice as hard as their male counterparts," said Lyv.

Determined to turn her dream into reality, Xiao put all her energy into studying and memorizing all the switches and knobs in the cab.

Xiao's father is a martial art aficionado. He named his daughter after Fan Lihua, a legendary lady general in Chinese folklore in the Tang Dynasty (618-907), hoping that she would be as daring as the ancient heroine.

"On my maiden drive, I'll invite my parents to ride on the train," Xiao said. "I will try my best to make it happen."