Shi Xiaojing came to school early on September 2, the first day of a new semester. She arrived before 7 am to make sure that all preparations were done. Then she walked to the front gate of the school to greet the students.

Shi has been at the gate every school day since 2005 when she was appointed headmistress of Minhang Qizhi School, a special education facility for mentally handicapped students.

There are 202 students registered at the school, all of them are low-functioning, with IQs below 50. The average IQ of normal people varies from 85 to 115.

This year on opening day, she wore a red dress with a polka-dot shirt on top.

"I want to look bright to them," she said.

About the same time, Binbin arrived at the school.

The bulky 20-year-old has worked as a librarian there for two years. His job on the first day was to prepare printed documents for teachers and take care of the delivery of new books for the library.

When the flag-raising ceremony began at 8am, Binbin had just finished carrying the last box of books in. His blue shirt was soaked with sweat.

Shi walked over to Binbin.

"Look at you, all wet," she said, patting his shoulder. "Go change into your other shirt. You know where I put it."

Unlike other employees here, Binbin is graduate of Qizhi. He is autistic.

"He enrolled in the school the same year as I came when he was 5," Shi said, recalling how he stumbled around as a boy. "I used to teach normal middle school kids. I had no clue nor even the self-confidence to deal with these special children."

When Shi first became the headmistress, she ran into a student in a shopping mall. The student yelled at her, and people around her stopped and stared. She maintained her cool and attempted to calm the student.

"Later I learned that the student's mother was blind," she said. "He was at the mall to help his mother with some banking business. At that moment, I told myself there is nothing to worry about. These are all just innocent souls."

Each child has different symptoms. Many have nervous tics. Some are prone to violent fits. Most can be difficult to reach.

"There is no formula when communicating with them," Shi said. "Each one of them is unique."

When Shi came to Qizhi School, there were only five teachers with majors in special education; the rest were all amateurs like her. She spent all her spare time reading books and essays about special education.

Teachers at the school have felt their way through the curriculum. One of Binbin's teachers, surnamed Wang, gradually noticed that drawing would calm the boy down during a fit of anger. So Binbin was encouraged to go to the blackboard to draw whatever he wanted whenever he became stressed.

Over time, Binbin started to understand the instructions from the teachers. More importantly, he learned to express himself in a way that could be understood by others.

Shi has evaluated each student individually to ascertain the best way to teach them to communicate. Throughout the years, she and her staff have published more than 350 papers on special education for the mentally handicapped. 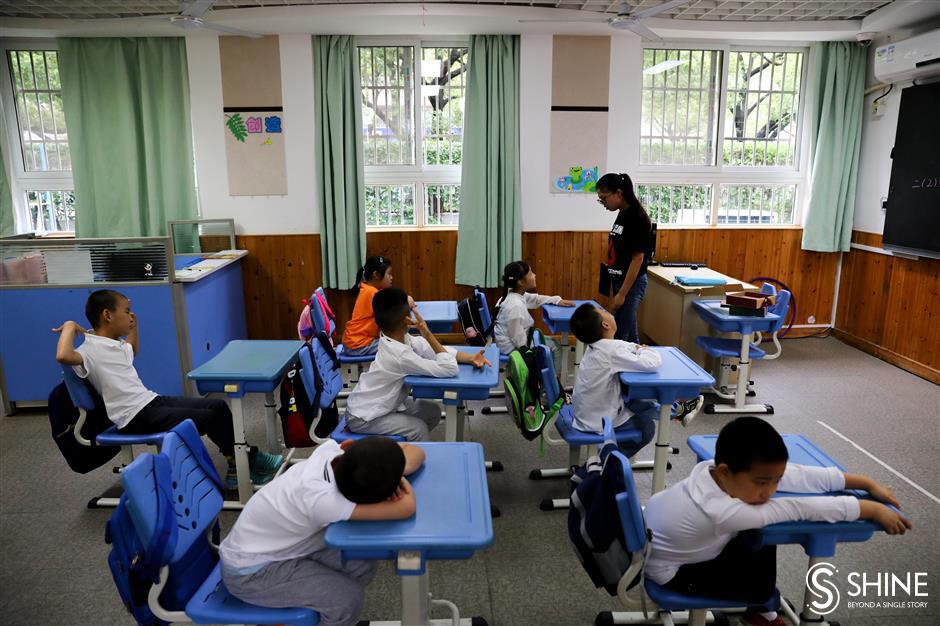 Students from Minhang Qizhi School have their first class of a new semester on September 2. [Shanghai Daily/Jiang Xiaowei]

The teacher's class had eight students, five of them autistic. The young teacher just couldn't cope.

"I immediately asked her to withdraw from the class and tried to offer her a new position," Shi said. "But she left the school anyway, the only teacher to do so."

Teachers face more than mental stress. Zhang Li, a physical education teacher at the school, was once bashed by a student.

"You think you are strong enough when you major in sports," Zhang said. "But my chest ached for days."

Such violent incidents are common at the school. Shi organized psychological counseling for all teachers and initiated lecture sessions for them on how to communicate with special students.

"Unlike many teachers in general education, who can proudly recall students who went on to become distinguished, special education teachers can never feel that level of satisfaction," Shi said. "These students express their love and gratitude in other ways, and those ways can make you feel that all your efforts are worthwhile, frustrations notwithstanding."

Haohao is a fifth-grade student at Qizhi. His mother died when he was only three months old. When he was one, Haohao was diagnosed with autism. He was raised by his grandparents and had never called anyone mama.

"You can imagine how surprised we were when Haohao came home and told us things about his 'mama' headmistress," said Wang Tongfen, Haohao's grandmother. "Though he is autistic, the headmistress noticed his craving to perform and express himself."

Wang and her husband are both over 80, and they worry about what will happen to their grandson when they are gone.

"Unfortunately, most mentally handicapped children have to stay at home after they leave school," Shi said. "What we have to do is to create a future where they can find their place in society." 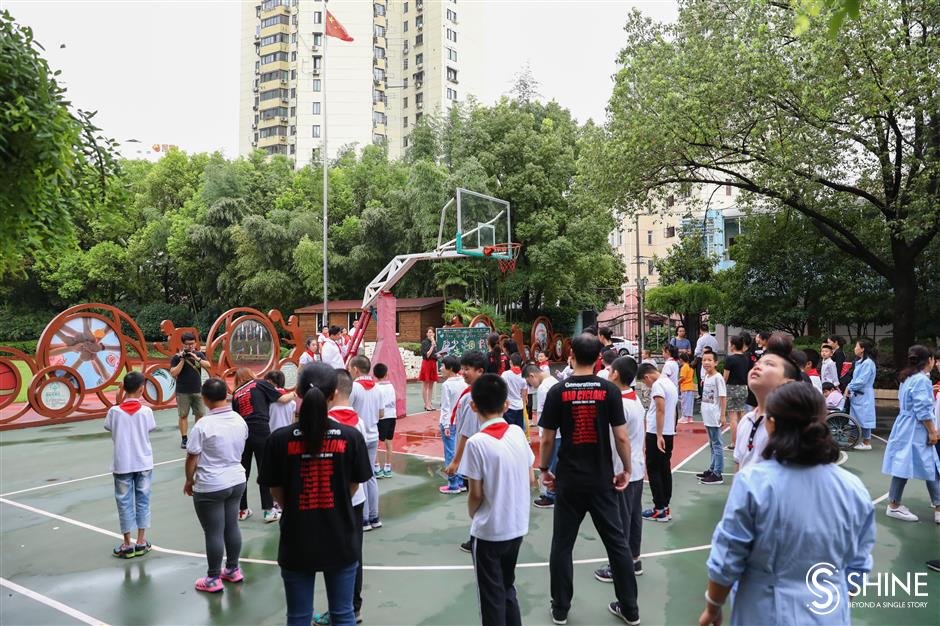 The students of Minhang Qizhi School gather on the playground to attend the flag-raising ceremony. [Shanghai Daily/Jiang Xiaowei]

Since 1993, when Qizhi School first opened, more than 300 students have graduated. Only a small proportion of students managed to find stable jobs.

"Many of them had worsened conditions after they left, and there was no choice but for them to remain at home," Shi told Shanghai Daily. "Even though my job has won me titles and awards, those things don't matter as long as these children and their families are still struggling to make their way in life."

The situation is improving. Of the 20 students who have graduated since 2017, about half have found jobs.

During the summer break, Shi said she visited the now online celebrity Menggongfang Café, where most of the staff are mentally disabled.

"It is a good sign that the public is now paying more attention to the plight of the mentally handicapped," Shi said. "Yet I keep thinking that we can do more than simply offering jobs to a handful of these young people."

Shi envisions other workplaces where special students can work for a few months to learn useful skills and learn to blend in with society.

As she outlined these plans to a Shanghai Daily reporter, Binbin returned, with his shirt changed.

"Are you doing an interview?" he asked. "Please make sure mama headmistress looks pretty in the photos."

Shi bent over in laughter, and Binbin laughed too.