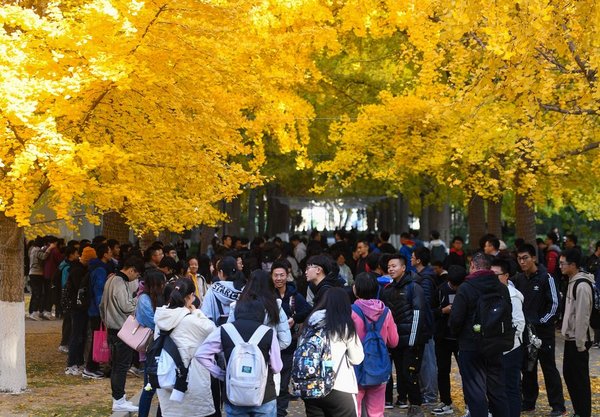 Students gather under ginkgo trees at the University of Science and Technology Beijing in Beijing, November 7, 2019. [Xinhua/Chen Yehua]

The population logged 7.4 out of 10 points in health self-evaluation scales of the survey.

BEIJING, January 7 (Xinhua) — A survey on the wellness of Chinese college students showed that overall the university population stays in good health in their modern, fast-paced lives, the China Youth Daily reported Tuesday.

The population logged 7.4 out of 10 points in health self-evaluation scales of the survey, said the newspaper, adding that half of those surveyed gave themselves eight points or higher.

The survey, jointly released by the newspaper and a Chinese mobile healthcare application Dingxiang Doctor, was based on answers from questionnaires and group interviews involving 12,117 students from more than 40 universities nationwide.

According to the report, more than 60 percent of respondents said they were plagued by stress arising from academic performance in 2019.

Despite overall good health, 86 percent of respondents said they suffered from health problems over the past year, among which skin disorders, sleep deprivation and emotional problems made the top of the list, said the report.