— Chinese President Xi Jinping called on the G20 members to make concerted efforts in fighting "the most serious pandemic in a century."

— Xi proposed that the G20 should ensure the smooth functioning of the global economy and restore the secure and smooth operation of global industrial and supply chains, reduce tariffs and barriers.

— The G20 should level the playing field for high-tech companies from all countries, Xi said.

BEIJING, Nov. 21 (Xinhua) — Chinese President Xi Jinping on Saturday proposed constructing a "global firewall" against COVID-19, reducing tariffs and barriers as well as tapping into the booming digital economy to battle the pandemic and reboot the flagging world economy.

Addressing the Group of 20 (G20) Riyadh Summit via video link, Xi said the group has once again played an "important and irreplaceable" role in the global war against the pandemic which has "impacted the world in a more profound way than the 2008 global financial crisis did."

"To contain the virus, stabilize the economy and protect livelihood remains a long and arduous journey for all countries," Xi said. "While containing the virus, we must also stabilize and restore economic growth."

His remarks came as humanity is grappling with growing uncertainties caused by the pandemic pullback, a global recession, as well as backlash to economic globalization.

The G20 groups the world's major economies whose combined GDP accounts for over 85 percent of the world's total.

They are widely expected to take more initiatives through closer cooperation to address the pandemic, and its lasting and far-reaching impact on the world economy. 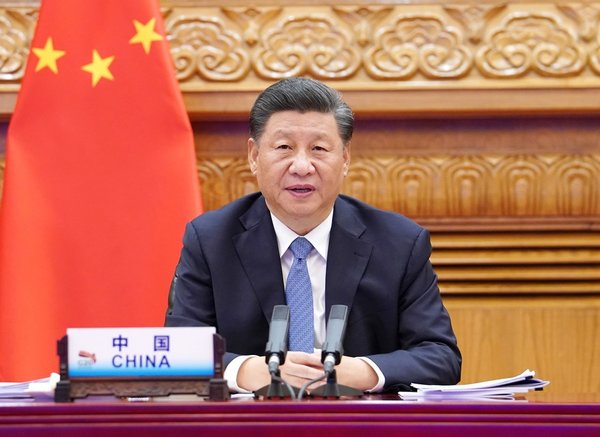 Xi called on the G20 members to make concerted efforts in fighting "the most serious pandemic in a century" as the rising toll entails a coordinated response.

"We should speed up action and support the World Health Organization (WHO) in mobilizing and consolidating resources and distributing vaccines fairly and efficiently," Xi said.

The helmsman of the world's second largest economy said China stands ready to step up cooperation with other countries on research and development, production and distribution of vaccines for COVID-19.

"We will honor our commitment of giving assistance and support to other developing countries, and work to make vaccines a global public good accessible and affordable to people around the world," Xi pledged.

"China's message is clear -- vaccines should be a global public good and so should its vision of a stronger community with a shared future," Feng Zhongping, vice president of China Institutes of Contemporary International Relations, told Xinhua.

In March, Xi called for a resolute all-out global war against the COVID-19 outbreak as leaders of the G20 convened an extraordinary online summit to coordinate multilateral response to the pandemic.

It was the first time for G20 leaders to hold a summit virtually ever since the mechanism, which used to only gather finance ministers and central bankers, was elevated to be the world's premier platform for international economic cooperation in 2008. The two-day summit, along with three other key multilateral diplomatic events that the Chinese leader attended within less than two weeks, has seen Xi champion multilateralism and free global trade.

He proposed that the G20 should ensure the smooth functioning of the global economy and restore the secure and smooth operation of global industrial and supply chains, reduce tariffs and barriers.

Xi said China has put off debt repayment totaling over 1.3 billion U.S. dollars, pledging that the country will strengthen measures on debt suspension and relief for countries with particular difficulties.

"We should firmly safeguard the rules-based multilateral trading system that is transparent, nondiscriminatory, open and inclusive," Xi said, calling on the G20 to oppose unilateralism and protectionism, and safeguard developing countries' right to and space of development.

He reiterated China's new development paradigm is by no means to close its doors but to build a new system of open economy of higher standards.

"Xi's words show that China's position of continuously and firmly promoting globalization and joining the division of labor in the global industrial and supply chains, as well as its position of working with other countries to develop and share the Chinese market through enhancing its market openness," said Ren Libo, head of the Beijing-based Chinese think tank Grandview Institution.

"China actively embraces the world economic order and shoulders its responsibilities and obligations as an important member of the global community through proactive participation and joint construction," Ren told Xinhua. In his speech, Xi attached great importance to the digital economy which has seen fresh momentum since the outbreak of the pandemic.

He proposed that the G20 should advance its efforts in harnessing the role of the digital economy as the pandemic has fueled the boom of new technologies, new business forms and new platforms.

The G20 should enhance data security cooperation, strengthen the digital infrastructure, and level the playing field for high-tech companies from all countries, Xi said.

He also stressed that the group should address the challenges posed by the digital economy to employment, taxation and vulnerable groups, and seek to bridge the digital divide.

"China is ready to work with all parties to explore and formulate digital governance rules on the basis of the China-proposed Global Initiative on Data Security," he said.

Calling the pandemic "a grave challenge which has exposed the deficiencies of global governance," Xi urged a strengthened UN-centered international system and improvement of the governance architecture for economic globalization, as well as support to the reform of the World Trade Organization.

According to the president, strengthening the global public health system as well as preventing and controlling the COVID-19 pandemic and other infectious diseases are "the most pressing task of the moment."

Xi stressed efforts to strengthen the role of the WHO and advance the prevention of and response to pandemics to build a community of health for all.