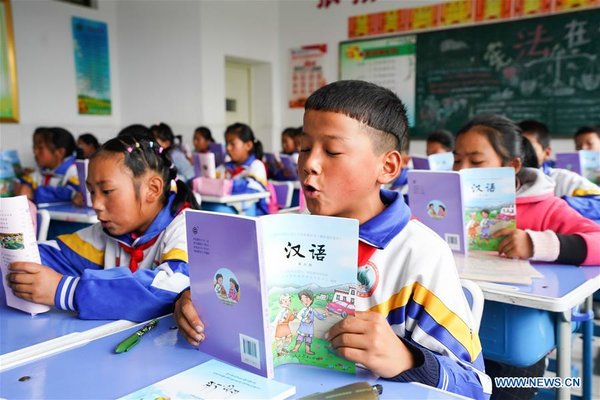 Children without actual guardianship will also be qualified to receive welfare

For years, children whose parents were either incarcerated or undergoing drug rehabilitation have struggled in the care of other relatives, who are often poor and negligent.

But because their parents are alive, they can't live in orphanages or receive government money for orphans, which is four times the basic living allowance they get as impoverished people.

In extreme cases, some of them feel helpless and commit suicide.

But things have started to change since a guideline aimed at boosting welfare for an estimated 500,000 de facto orphans took effect on Jan 1.

"De facto orphans" is a vague term that has long been used by media and advocacy groups when referring to children without actual guardianship.

But the guideline made the term more specific, referring to children whose parents have severe disabilities or illness, are in jail or under detention, are in compulsory isolation for drug rehabilitation or restriction of personal freedom or cannot be contacted.

The designation also refers to children who have one parent who is dead or missing while the other falls under the aforementioned criteria.

To curb fraud, the document warned of punishments if parents pretend they are not capable of raising the child. Law enforcement officers can revoke guardianship of parents who defraud child welfare, and civil affairs authorities can charge those parents child-rearing fees, the guideline said.

The guideline is expected to entitle hundreds of thousands of minors to enjoy benefits equivalent to those of orphans — including a monthly allowance of about 1,200 yuan ($171), student grants and government-paid healthcare, experts said.

But many expressed cautious optimism as the new rules have listed only the most common types of de facto orphans.

In impoverished rural areas, many children have been reduced to de facto orphans after their poor, widowed mother remarries, in most cases into a family that is not so better off, according to Kang Yongzhong, who leads a nonprofit organization in Changsha, Hunan Province.

The organization has helped more than 1,500 de facto orphans since 2011.

"I've known many cases in which mothers are really helpless, but their children cannot be counted as de facto orphans by the official criteria," he said.

Kang said de facto orphans are a volatile population that is small in number, and their eligibility for benefits varies over time, as some parents could be incarcerated repeatedly, making it difficult for local officials to identify them.

The challenges facing de facto orphans garnered nationwide attention in 2015 after a 14-year-old boy led three of his sisters — aged 10, 8 and 5 — to commit suicide by drinking pesticide in rural Guizhou Province.

Parents of the children were found to be violent and negligent and had spent years working away from home, leaving the children to fend for themselves.

The case also led five local officials to be censured for inaction.