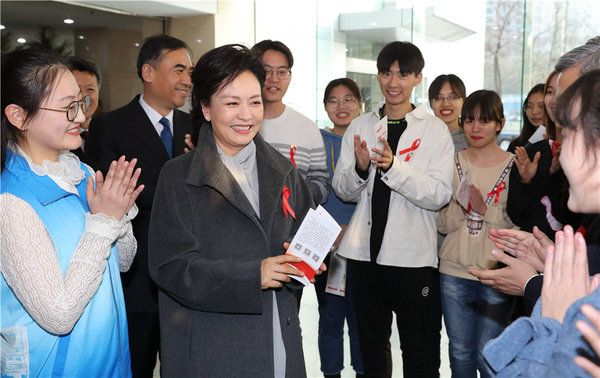 Peng Liyuan, wife of President Xi Jinping, attends an event on Thursday at Communication University of China in Beijing, ahead of World AIDS Day on Sunday. Peng is a goodwill ambassador of the WHO for tuberculosis and HIV/AIDS. [National Health Commission]

China will take comprehensive measures to control HIV transmissions in a bid to keep HIV/AIDS prevalence in the country at a low level, the National Health Commission said on Saturday, the day before World AIDS Day.

The commission listed six major goals expected to be achieved in the next three years, including raising awareness of HIV prevention and control and educating people on avoiding or reducing unsafe sexual behavior.

The goals also include detecting and treating as many cases of HIV infection as possible and eliminating mother-to-child transmission.

The commission also wants more condoms to be available in public places such as hotels, and increased efforts made to crack down on crimes that may lead to HIV transmission.

There were 230 million HIV tests conducted in China in the first 10 months of this year and 131,000 new cases reported, the commission said.

Sexual transmission was the main route of infection, with heterosexual sex accounting for 73.7 percent of new infections and sex between gay men accounting for 23 percent, it said.

The country had 958,000 people living with HIV/AIDS by the end of October, it added.

There were 240 million HIV tests conducted in China last year, which revealed 149,000 new cases, according to the Chinese Center for Disease Control and Prevention. Volunteers stick red ribbons on a billboard in support of a campus HIV/AIDS awareness event at Northwest University in Xi'an, Shaanxi Province, on Sunday. [For China Daily/Yuan jingzhi]

Premier Li Keqiang has called for unremitting efforts to prevent and treat major infectious diseases such as AIDS.

Li said in an instruction published on Saturday that China has made marked achievements in the prevention and treatment of AIDS while facing some new situations that require attention.

Relevant agencies should use reform of the disease prevention and control system as an opportunity to continue to innovate mechanisms and methods, ensure sound public health services, and focus on key areas, groups and links, he said.

Li said the effectiveness of education and intervention needed to be improved, monitoring and early warning strengthened, and better play given to the role of social organizations in AIDS prevention.

With continuous efforts, China has made significant progress in HIV prevention and control in recent years, with HIV infection through blood transfusion eliminated, and transmission through drug abuse and from mothers to babies effectively contained, the commission said.

Even more worrying, he said, is that about a quarter of Chinese living with the virus are unaware of their HIV-positive status, and a large number of infected people do not receive diagnoses until their conditions have developed to an advanced stage.