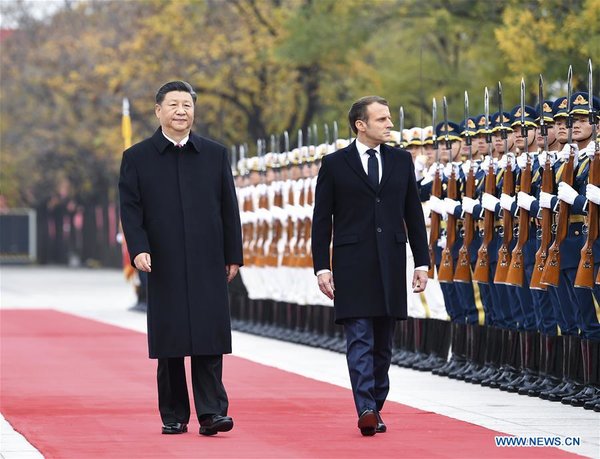 "We have made mutual visits to our respective countries on the 55th anniversary of the establishment of diplomatic relations and lifted China-France ties to a higher level," Xi said.

Xi noted that the speeches, delivered respectively by him and Macron at the opening ceremony of the second China International Import Expo on Tuesday in Shanghai, sent a strong message to the world in firmly safeguarding multilateralism and free trade, as well as building an open world economy.

"Our frank, in-depth and fruitful discussions on many topics of common concern have deepened mutual understanding and trust," Xi said.

China and France, as two permanent members of the UN Security Council and representatives of Eastern and Western civilizations, should strengthen strategic communication, shoulder more responsibilities and exercise their roles as major countries, as the world is undergoing changes rarely seen in a century, Xi said.

He pledged to work jointly with Macron to further advance the China-France comprehensive strategic partnership, looking out on the world, the future and the people, and keep the partnership at the forefront of major-country relations.

China-France ties have shown a strong momentum of development, Xi said, adding that the consensus reached by him and Macron had been actively implemented since his successful state visit to France in March.

Citing some successful projects including the No.1 and No. 2 power units of Taishan nuclear power plant, which have provided a successful model for the construction of third-generation nuclear power plants around the globe, Xi said the two countries have published the list of the second batch of industrial cooperation projects.

The Chinese government has just successfully issued 4 billion euro-denominated sovereign bonds in Paris. The two countries have also completed negotiations on an agreement of geographical indications between China and Europe.

Xi expressed his hope that more tangible cooperation results will be achieved.

Stressing the importance of maintaining and enhancing political mutual trust, Xi called on both sides to put their words of respecting each other's sovereignty, territorial integrity, core interests and major concerns into actions.

The two countries should facilitate exchanges between their legislative bodies, political parties and armed forces, and support the central and local departments in strengthening exchanges, Xi said, calling for strengthened cooperation on cybersecurity and counter-terrorism.

The Chinese president called for further cooperation on large-scale projects, saying that China is ready to deepen the entire industrial chain cooperation with France in the nuclear energy field, encourage China's enterprises to explore new cooperation with France not only within the two countries, but also in third-party markets, and strengthen joint research and development on nuclear base and high-tech technologies.

Xi said he hoped the new cooperation in aviation, aerospace and other fields could be well implemented.

He said he hoped that France will put into action its words of not adopting discriminatory policies against China.

"China is willing to import more high-quality and safe French agri-food products and carry out all-round agricultural cooperation in accordance with market demand," Xi said, noting that more efforts should be made to strengthen exchanges and cooperation in the intellectual property rights field and support the early conclusion of an ambitious and balanced China-European Union (EU) investment agreement.

Xi said China and France should intensify cooperation on innovation and achieve sustainable development. Efforts should be made to deepen science and technology cooperation, strengthen cooperation in fields including environmental protection and biodiversity conservation, and expand pragmatic cooperation in new energy vehicles, Internet-connected cars and artificial intelligence.

As for promoting exchanges and mutual learning among civilizations, Xi wished the 2021 China-France Year of Culture and Tourism a success, noting that the two sides should strengthen cooperation in museum and cultural heritage protection.

Xi said China is ready to strengthen cooperation with France in multilateral mechanisms such as the United Nations (UN) and the Group of 20.

They should push forward reform of the WTO toward the right direction through consultation, and give special consideration to developing countries' rights and interests, Xi said.

"We will adhere to the principle of common but differentiated responsibilities, encourage more countries to cooperate in combating climate change with full and thorough implementation of the Paris Agreement," the Chinese president said.

Macron said he is glad to visit China again on the 55th anniversary of the establishment of diplomatic relations.

"My frequent exchanges with Xi have deepened friendship and political mutual trust between France and China and boosted pragmatic cooperation," Macron said, voicing his agreement with Xi on views concerning bilateral cooperation.

France and China take the same position on many major international issues, and the two countries, as two major powers, shoulder particularly significant responsibilities under the current international situation, he said.

Referring to France's strengthened dialogue and cooperation with China as "playing an important exemplary role," Macron said France is willing to properly settle the differences between the two sides based on mutual respect.

French companies are eagerly looking forward to taking the opportunity of China's expanded opening-up, further entering into the Chinese market, expanding exports of agricultural products to China, and strengthening cooperation in areas such as aviation, aerospace, and civilian nuclear energy, as well as sci-tech innovation and finance, he said.

China's issuance of euro-denominated sovereign bonds in Paris is of great significance to France, Macron said, pledging to keep the French market open to Chinese companies.

He said France is ready to advance the alignment of the BRI with the EU's Euro-Asian connectivity strategy and jointly promote the green development of the Belt and Road.

Speaking of the Beijing Call for Biodiversity Conservation and Climate Change, which was released after the talks between the two heads of state, Macron said that France and China can play a leading role in these important issues.

It is of critical significance for the European Union to intensify cooperation with China in today's uncertain world, and France is willing to advance EU-China ties and speed up the negotiation of the EU-China investment agreement.

They also met with the press together and witnessed the signing of a joint statement on concluding the negotiations of geographical indications between China and the EU.

An action plan on China-France ties was also released after their talks.

Xi and Macron also attended the closing ceremony of an economic summit between China and France.

China upholds opening-up and the opening strategy of mutual benefit and win-win results, and will continue to improve internal and external linkage of development to benefit more countries and peoples while realizing its own development, Xi said in his speech.

Xi said China is ready to work with France and Europe to resolutely uphold the multilateral trading system and oppose protectionism and unilateralism, build a free and open trade and investment policy environment and inject impetus to facilitate world economic growth.

Xi called on China and France to positively align with universally accepted international rules and standards, work to achieve high-standard and sustainable goals that benefit people's livelihood and jointly build the Belt and Road with high-quality.

China and France should shoulder the responsibility to address the global governance deficit, safeguard multilateralism, jointly tackle global challenges and build a community of a shared future for humanity, Xi said.

Macron called on France and Europe to open their markets to China, welcome investment from Chinese enterprises, and provide them with a business environment featuring fair competition. 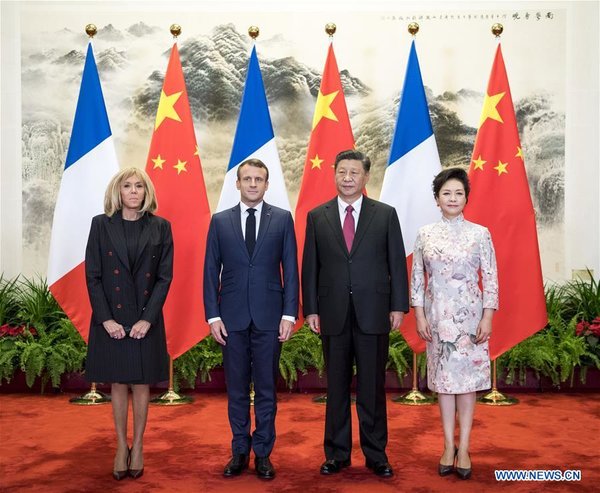 Chinese President Xi Jinping and his wife Peng Liyuan pose for photos with French President Emmanuel Macron and his wife Brigitte Macron ahead of talks between the two leaders in Beijing, capital of China, November 6, 2019. [Xinhua/Li Xueren] 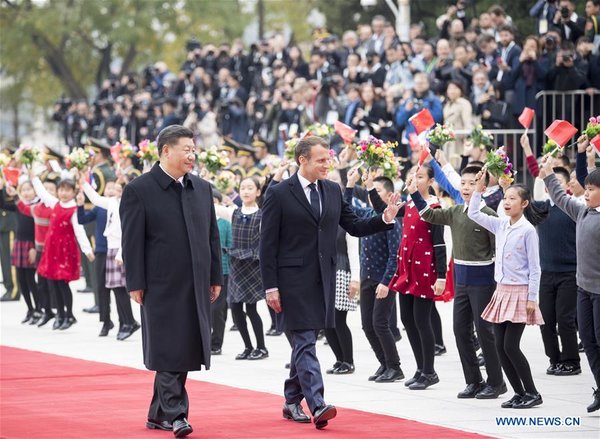 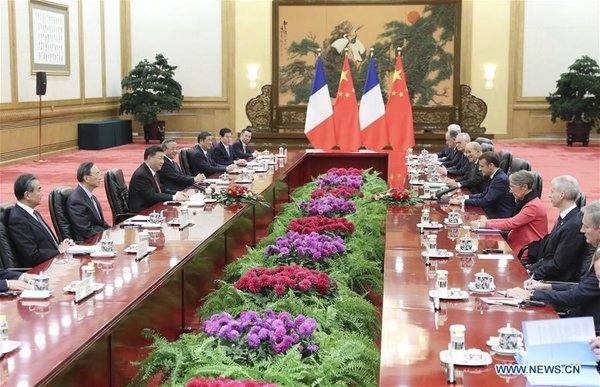 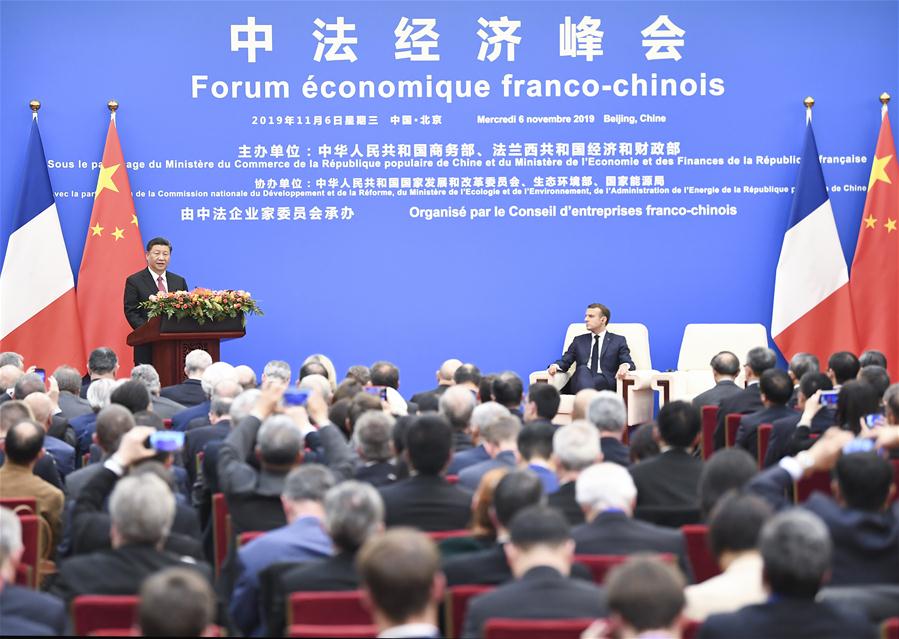 Chinese President Xi Jinping addresses the closing ceremony of an economic summit between China and France at the Great Hall of the People in Beijing, capital of China, November 6, 2019. French President Emmanuel Macron also attended the ceremony. [Xinhua/Yan Yan]