With over 1,700-year history of porcelain making, Jingdezhen, a city in east China's Jiangxi Province, has now shouldered a new mission in the new era. According to a newly-released plan, the ancient porcelain capital will be built into national ceramic culture inheritance and innovation pilot zone.

Master porcelain artist Zeng Yalin was born in Jingdezhen, a city renowned for its over 1,700-year history of porcelain making. After witnessing the city's ups and downs over the past five decades, Zeng has new expectations of the city, as Jingdezhen now shoulders a new mission in the new era.

The government of east China's Jiangxi Province held a press conference Thursday to unveil details of a newly-released plan of building Jingdezhen into a national ceramic culture inheritance and innovation pilot zone. 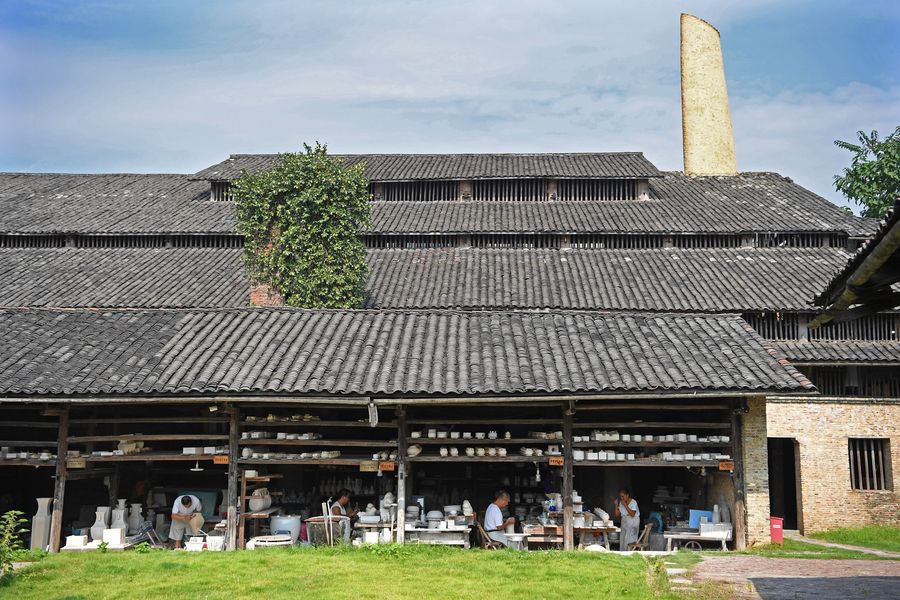 "Under the plan, Jingdezhen will become a world ceramic cultural center by 2035," said Zhang Heping, director of the provincial development and reform commission.

"Jingdezhen is an inclusive city, with skilled craftsmen from all over the world gathering here," Zeng said. "The pilot zone will bring historical opportunities for the city, which expects to attract more artists from home and abroad, introduce new ideas, strengthen exchanges and stimulate the development of the ceramic industry."

Joined by a dozen state-run pottery plants, Jingdezhen was once an important manufacturing base of porcelain in the country.

However, the bustling town suffered from drastic drops in profits in the 1990s when the state-owned factories lost their edge over their coastal counterparts who had better equipment and technology. Factories, including Yuzhou Porcelain Factory, shut down, and workers were laid off.

More than 60,000 technicians and workers left the city in the late 1990s and early 2000s. Many obsolete factories and old alleys were demolished for real estate development.

To keep the unique hand-made porcelain culture in Jingdezhen, the local government has been making efforts to rejuvenate the ancient town in the past decade.

Yuzhou Ceramic Factory has now been built into a cultural and art complex — Taoxichuan, a new landmark for the city dotted with art museums, galleries, traditional ceramic workshops, restaurants and hotels.

Beyond the renovated Taoxichuan, an unprecedented large-scale conservation and renovation campaign has been launched in the city, not only for ancient imperial kiln sites, but also old residential buildings, porcelain shops and guild halls scattered there.

According to the plan, one of the primary missions of the pilot zone is to enhance the protection of ceramic culture and its inheritance and innovation. 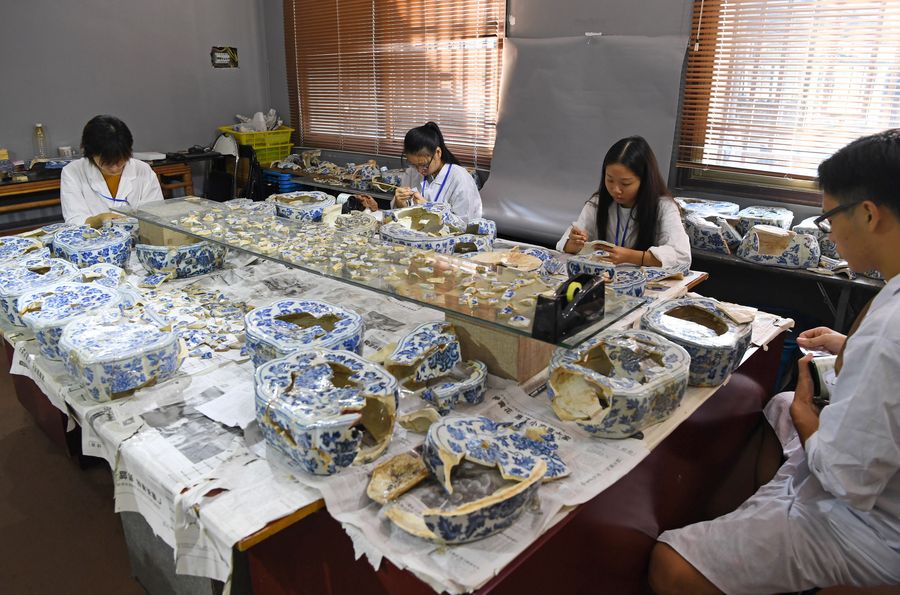 Also, Jingdezhen will further improve the archaeological system, back the application of imperial kiln sites as World Cultural Heritage sites, make laws and regulations concerning the protection of ceramic cultural relics and construct a national research and restoration center for ancient ceramics.

"The protection and inheritance of cultural resources is the foundation of the pilot zone, which can lead economic development," said Liu Shilin, an expert at Shanghai Jiao Tong University.

As one of the areas with the highest concentration of artistic talents in China, Jingdezhen has over 30,000 artists, including 5,000 foreigners, living in the city.

This group of artists is known as "jingpiao", foreigners as "yangjingpiao". 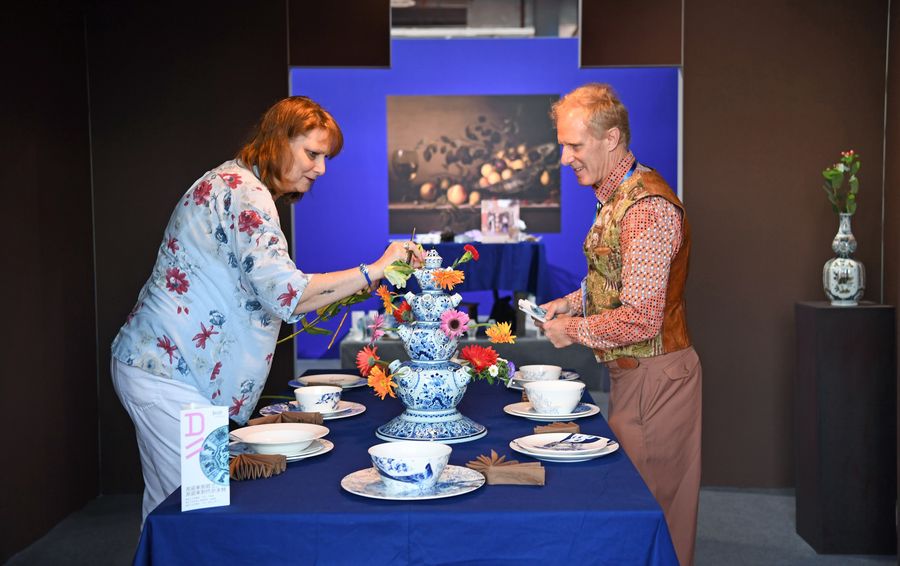 Moreover, the city now boasts of more than 6,700 ceramic enterprises and workshops. Some 150,000 people work in the porcelain-related industry.

Christiane Toewe, a German ceramic artist, has come to Jingdezhen for three times.

"At home, I have a big workspace, but it's like a refreshment coming here for three months and working on new projects," Toewe said.

"It's nice and interesting for me, and also for all international artists who came here, to exchange thinking of my works and theirs. Every person from Europe, Africa, America, and Russia, came here to meet Chinese culture can learn from the Chinese," she said.

According to the plan, more high-level porcelain talents will be introduced to Jingdezhen and both domestic and foreign institutions of scientific research, art and think tanks are encouraged to establish branches in the pilot zone.

More preferential policies tailored for talents, such as housing, resettlement of their spouses, children's education, as well as loans for start-ups, will be rolled out. 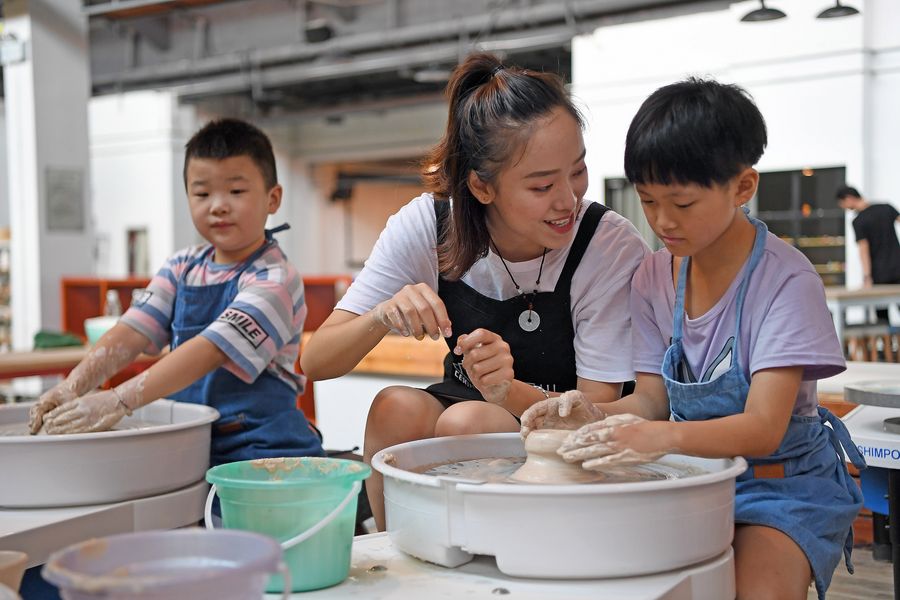 "The long history of porcelain making and rich ceramic relics are the biggest advantage, resource and wealth of Jingdezhen," said Liu Feng, mayor of Jingdezhen.

The pilot zone is expected to become an important carrier of cultural exchange among countries and regions along the Belt and Road, and a card to show the charm of Chinese ceramic culture, Liu said.