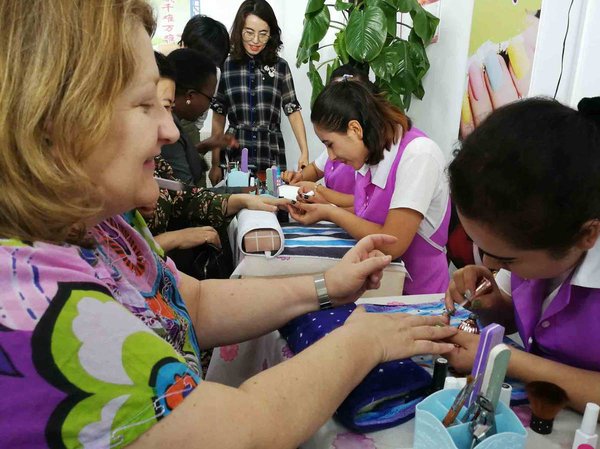 A delegation of UN envoys from eight countries has visited the Xinjiang Uygur Autonomous Region to gain a better understanding of the region's achievements, from de-radicalization to poverty eradication.

The diplomats, who hailed from Yemen, Equatorial Guinea, Mozambique, Zambia, Cote d'Ivoire, South Africa, Ethiopia and Zimbabwe, visited Xinjiang between August 28 and September 1 upon the invitation of China's foreign ministry.

The five-day tour brought them to the regional capital, Urumqi, as well as Hotan and Kashgar in southern Xinjiang, where they visited factories, bazaars, communities, mosques and vocational training centers.

After landing at the Urumqi airport, the delegation took the subway to arrive at the city proper, where they visited a jade and jewelry industrial park that combines ancient craftsmanship and 3D printing, and a company that produces degradable packaging film.

Lazaro Ekua Avomo, permanent representative of Equatorial Guinea to the United Nations Office at Geneva, was impressed by the urban and economic development of Urumqi.

"When I studied at Renmin University of China in Beijing from 1992 to 1998, I only knew Xinjiang was a remote, underdeveloped place. Now Urumqi strikes me as being no different from other big cities in China," Avomo said.

In Hotan and Kashgar, the diplomats were introduced to a local campaign to reduce poverty with mushroom farming and several village-run garment factories. Amadeu Paulo Samuel da Conceicao, permanent representative of Mozambique to the UNOG, expressed hopes that Xinjiang's poverty relief model could be introduced to Africa.

At the vocational education and training centers in Hotan and Kashgar, the envoys had face-to-face talks with students and teachers. They also visited one graduate's family and learned how the center helped an unemployed youngster brainwashed by religious extremism find a new job and build a happy family.

Ali Mohamed Saeed Majawar, Yemen's permanent representative to the UNOG, praised the tour for giving them a better understanding of China's anti-terrorism measures.

"Poverty and terror are closely related, and there is no way for people to lead a prosperous and peaceful life in a place plagued by violence and terrorism," Majawar said. "It is therefore necessary to combat terrorism with education and vocational training."

Da Conceicao called for anti-terrorism cooperation between China and Mozambique. He also advised Western countries that disagree with China's anti-terrorism efforts to come to see with their own eyes what China has achieved.