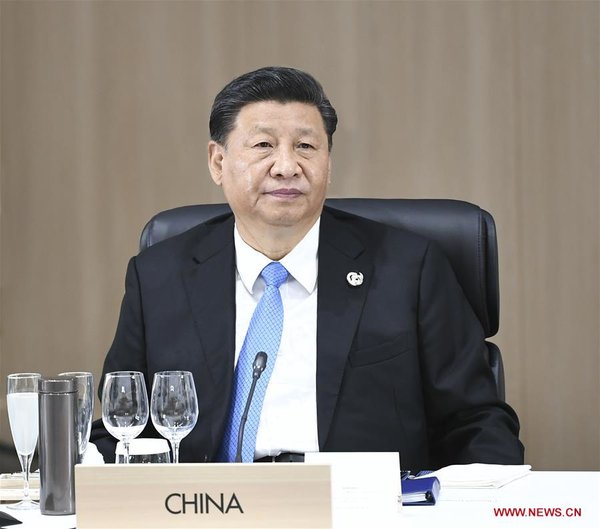 Chinese President Xi Jinping has led a chorus for safeguarding multilateralism and charting the course for the world economy and global governance at a summit of the Group of 20 (G20) major economies.

To lead economic globalization toward the right direction, Xi said in a much anticipated speech on Friday that the G20 members should embrace development opportunities with greater openness and seek win-win results with better cooperation.

The Chinese leader also pledged that the country, as a leading global economy, would undertake further opening-up measures, such as releasing the 2019 edition of the negative list on foreign investment, further bringing down China's overall tariff level, and introducing a punitive compensation mechanism for intellectual property infringement cases — all demonstrating China acting as a flag-bearer of free trade and multilateralism.

Multilateralism has been one of the keywords in Xi's speech at the Osaka summit and his meetings with other G20 leaders on the sidelines of the summit, as he noted that the world economy is once again at a crossroads 10 years after the global financial crisis.

Echoing his remarks, other G20 leaders also sent a clear and strong message to the world on upholding multilateralism and an open world economy to renew global confidence in trade liberalization and economic globalization.

"A free and open economy is the foundation of global peace and prosperity...While anxiety and discontent with abrupt changes due to globalization can at times generate the temptation for protectionism, bringing about sharp confrontation between states," said Japanese Prime Minister Shinzo Abe, the host.

"Now is the time we send out a strong message on the maintenance and strengthening of free, fair and non-discriminatory trading system," he added.

"Multilateralism is in the Europe's DNA. By being united and working together, we make ourselves individually and collectively stronger," said Juncker in a message to the summit.

According to Swaran Singh, a professor from the School of International Studies at the Delhi-based Jawaharlal Nehru University in India, "Xi's much anticipated speech at Osaka G20 summit aptly provides a direction for improving global trading system" to avoid "being myopic and guided by short-term interests."

"China is today seen as a major locomotive for providing momentum to ensuring trust in global trading systems," he said.

Echoing Singh's remarks, Hugo Dobson, head of the School of East Asian Studies at the Sheffield University in Britain, also saw China as the champion of multilateralism and the global trading system.

On China's ongoing efforts in this regard, Dobson said "it was already evident when China held the G20 presidency in 2016 that it was transitioning from a rule taker to a rule maker that seeks to shape international norms rather than just respond to them."

"So, China appears to be continuing along this trajectory," he told Xinhua.

We should strengthen the multilateral trading system and conduct necessary reforms of the World Trade Organization to make it more effective, Xi said.

Liu Di, a professor at Kyorin University in Tokyo, said the proposal was "powerful and effective" in countering unilateralism and protectionism.

"The Chinese leader highlights the spirit of partnership, calls for joint efforts, and advocates innovation for high-quality development, which will surely help the international community build up the determination to overcome protectionism," said Liu.

At the G20 summit, Xi also pledged to implement a slew of new opening-up measures, saying that China will further open up its market, proactively expand imports, continuously improve its business environment for foreign enterprises, and press ahead with various trade agreement negotiations.

"We can see China has taken the initiative to maintain and strengthen the multilateral trading system that the U.S. government is trying to undermine," said Tashiro.

Humayun Iqbal Shami, Chairman of Islamabad-based think tank Pakistan Economic Forum, said he appreciates that China offers the measures to open up when the world economy is facing growing uncertainties.

"It is a great gesture to the world, especially to the developing countries," he said. "It is an attitude of a country who considers itself responsible to sort out the international problems."

Singh believed that the Xi's pledge for actions underlines the country's sense of "responsibility" to "enhance confidence in the market" and "guide the development of economic globalization in the right direction."

Xi's vision of world economy is prudent and reflects the common aspiration of developing countries, said Joseph Matthews, a senior professor at the Beltei International University in Phnom Penh.

"The world economy cannot afford a continued trade war on tariffs and politically motivated economic sanctions on other sovereign countries. I personally believe united we stand, divided we falter," he said.