Editor's note: With the battle against the coronavirus-related pneumonia going on, forcing many people indoors, you might find yourself constantly fighting back the urge to climb the walls.

We have handpicked a bunch of online exhibitions from major Chinese museums to help you regain your inner peace. You can enjoy these virtual museum tours without leaving the comfort of your couch, and free of charge.

1. Virtual tour of the Palace Museum

On this virtual tour, you can have the 600-year-old Forbidden City entirely to yourself, take your time to explore the labyrinth of its halls, gardens and courtyards, as well as learn about the story of every exhibit that interests you. You can also feast your eyes on the museum's most famous snowscape. 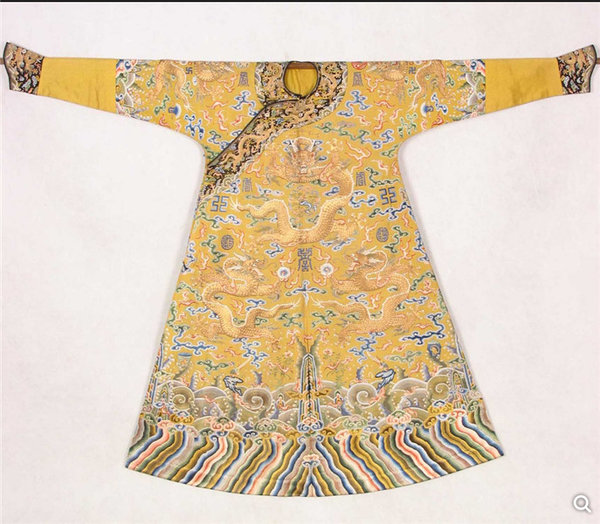 Formerly known as the Mukden Palace, the Shenyang Palace Museum in Northeast China's Liaoning province, was first constructed in 1625 by Nurhaci and used as the palace of the first three Qing (1644-1901) emperors before 1644.

The museum's online showcase presents 90 pieces, all recognized as grade one, or the highest level of China's cultural relics under state protection, from its impressive Qing imperial collection. Among them are top-quality works of porcelain, enamel, lacquerware, sculpture, calligraphy, painting and embroidery. With high-definition pictures and audio guidance, visitors can appreciate the details of these exquisite royal artifacts as well as learn the facts and history behind them.

Archaeologists also found that among the artifacts, many are pottery figurines of camel caravans from the Han (206 BC-AD 220) and Tang (618-907) dynasties, providing abundant information on cultural communication and trade between the East and the West. 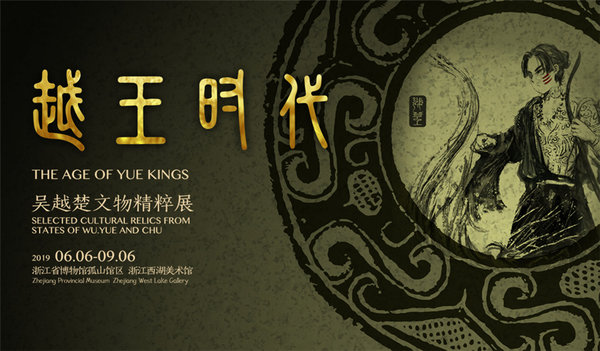 Poster for the exhibition The Age of Yue Kings: Selected cultural relics from states of Wu, Yue and Chu [Official website of the Zhejiang Provincial Museum]

4. The Age of Yue Kings: Selected cultural relics from states of Wu, Yue and Chu

Curious about the early periods of Chinese civilization? Check out the exhibition The Age of Yue Kings: Selected cultural relics from states of Wu, Yue and Chu held by the Zhejiang Provincial Museum and be prepared to be blown away by the ingenuity of ancient Chinese.

The exhibition teams up more than 320 pieces of cultural artifacts from 27 museums and cultural institutes across the country. It sketches the history of and relations among Wu, Yue, and Chu, three states that flourished and waned in the middle and lower reaches of the Yangtze River from the Spring and Autumn period to the Warring States period (770-221BC).

Aside from ancient bronzeware, lacquerware, pottery and porcelain, the two-millennia-old Sword of Gou Jian, king of the Yue State in the Spring and Autumn period (770-476BC), is also highlighted at the exhibit. 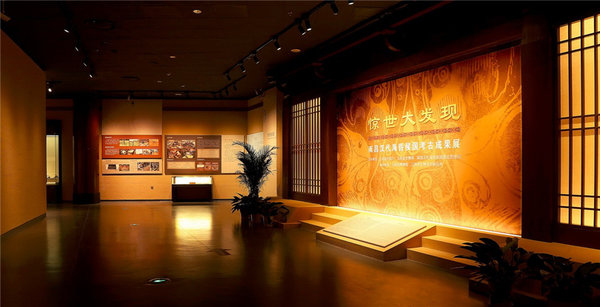 The Western Han Dynasty (206 BC-25 AD), during which the ancient Silk Road began construction, is one of the most prosperous periods in China's history. The greatest testament to its prosperity is none other than the cemetery of the Marquis of Haihun, the deposed Emperor Liu He.

Archaeological activities at the cemetery, located near Nanchang, capital of Jiangxi, started in 2011. More than 10,000 cultural relics, including gold, bronze and jade artifacts, have been unearthed so far. Now you can embark on a virtual tour arranged by the Jiangxi Provincial Museum to appreciate 922 artifacts excavated from the royal cemetery. 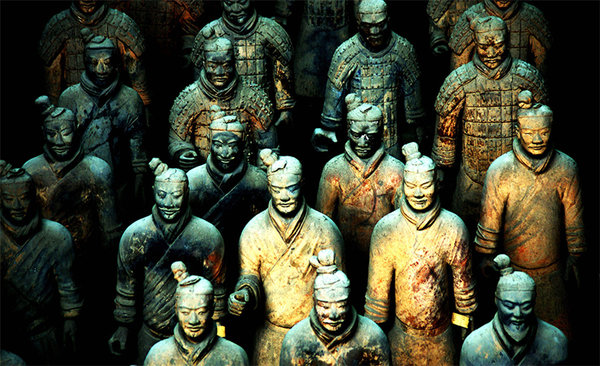 This photo shows a corner of a pit in Xi'an, Shaanxi Province, where the Terracotta Warriors were found by archaeologists. [Official website of the Emperor Qinshihuang's Mausoleum Site Museum]

The Emperor Qinshihuang's Mausoleum Site Museumin Xi'an, capital of Northwest China's Shaanxi province, has rolled out a virtual tour of its world-famous Terracotta Army, enabling visitors to enjoy a 360-degree panorama of the eighth wonder of the world from the comfort of home.

With a 20 billion-pixel resolution panoramic view, visitors can take a "walk" among the warriors in two of the four sites, pits one and three, to have a closer look than would be possible in person at the more than two-millennia-old statues. 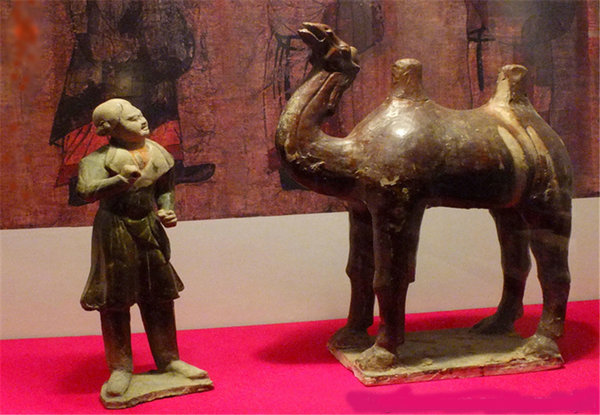 This photo shows a tri-color figure and horse, depicting a common scene on the ancient Silk Road in Tang Dynasty (618-907). [Official website of the Gansu Provincial Museum]

Situated along the historic trading network Silk Road, Northwest China's Gansu province served as a crossroads for the country and Central Asia. The temples, Buddhist art, and tombs left behind by merchants, travelers, and artists made Gansu one of the most culturally rich provinces in China.

Now the Gansu Provincial Museum is showcasing its cultural treasures conceived by the Silk Road through more than 420 artifacts, including bronzeware, silk embroidery, tri-colored glazed pottery of the Tang Dynasty (618-907), and blue-and-white porcelain of the Yuan Dynasty (1271-1368).

8. Marvel at the majesty of Mogao Grottoes

Want to appreciate the majestic, mysterious Dunhuang murals to your heart's content? Just head to the website of Digital Dunhuang, where you can have a 360-degree virtual tour of 28 of the Mogao Grotto caves, a UNESCO World Heritage Site, and two of the Yulin Grottoes.

With several clicks, a total of 4,430 square meters of murals in the 30 classic Dunhuang caves constructed over 10 dynasties will come alive before your eyes, thanks to the efforts the Dunhuang Academy has made over past three decades to digitalize the millennium-old caves. 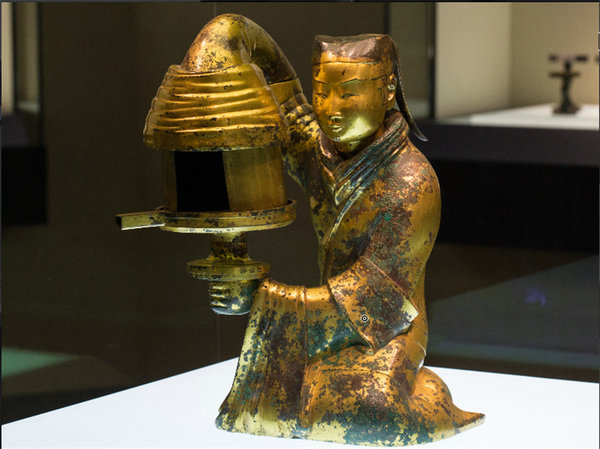 The gilded bronze Changxin Palace Lantern is an iconic piece from the Han Tombs in Mancheng County. [Official website of the Hebei Musuem]

9. Treasures of Han Dynasty: The Han Tombs in Mancheng County

In 1968, the discovery of the Western Han (206 BC-25 AD) tombs of Prince Liu Sheng, son of Emperor Jing and his consort Dou Wan in Mancheng County, North China's Hebei Province, rocked the world of archeology. As one of the top 10 archaeological discoveries in China in the 20th century, the tombs contain over 2,700 burial objects, dominated by exquisite bronzeware and ironware. Iconic objects unearthed from the tombs include two sets of intact jade armor sewn with gold thread, the gilded bronze Changxin Palace Lantern, and an elaborate gold-inlaid furnace.

Now you can embark on a virtual tour organized by the Hebei Museum to explore the treasures that demonstrate the splendid culture and advanced craft techniques of the Western Han Dynasty. 10. Have a virtual encounter with Tang Dynasty

When it comes to the most brilliant times in ancient Chinese history, few would not give their votes to the Tang Dynasty (618-907), an era characterized by openness, inclusivity, prosperity and poetry. Meet the Tang Dynasty Again, hosted by the Liaoning Provincial Museum, showcases 100 cultural artifacts related to the flourishing era.

Among them, 56 are from the museum's core collection and 44 are on loan from museums and cultural institutes such as the Palace Museum, the National Library of China and the Shaanxi History Museum. With paintings and calligraphy being the two main threads, the exhibition offers visitors a chance to explore the answer to the question of how great the Tang Dynasty was.