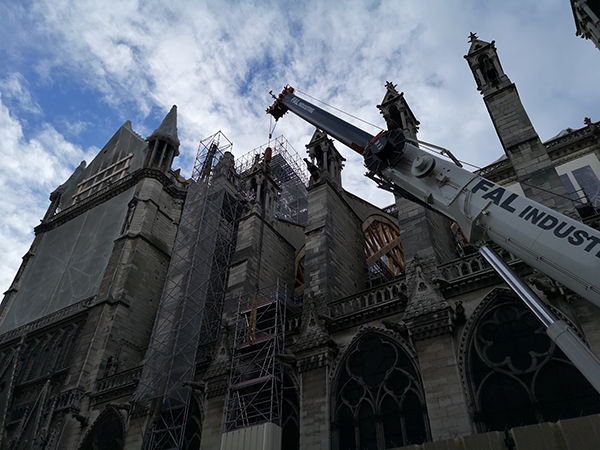 The cultural administrations of China and France jointly released a declaration on Wednesday in Beijing to kick off a program of bilateral cooperation to rebuild Notre Dame de Paris. [For China Daily/Ke Dong]

When the oak-framed roof of Notre Dame Cathedral in Paris burned to the ground in the blaze on April 15, people around the world wept over the fate of the iconic 12th-century monument.

Yet thanks to an unprecedented display of global unity, the rebirth of this cultural colossus is now guaranteed.

The cultural administrations of China and France jointly released a declaration on Wednesday in Beijing to kick off a program of bilateral cooperation to rebuild the world-famous cathedral.

With President Xi Jinping and his French counterpart Emmanuel Macron's presence during the latter's state visit to China on Wednesday, the declaration was signed by Liu Yuzhu, director of the National Cultural Heritage Administration and Franck Riester, the French minister of culture, in the Great Hall of the People.

"A loss of cultural heritage means the disappearance of a period of history and culture," Liu says in a written statement. "It also teaches us a lesson about ensuring the safety of cultural heritage, and prompted us to set red lines for the future that must not be crossed."

In line with the declaration, a team of Chinese experts on cultural heritage will arrive in Paris in 2020 "as early as possible" to work on the site alongside French conservators.

Liu reveals that the two countries have remained in frequent contact since the fire to explore avenues of cooperation.

"The project will greatly expand the horizons of Sino-French cooperation in terms of cultural heritage," he says. "It will set a good example to the world."

China is the first country outside of France to reach an intergovernmental agreement over the renovation of Notre Dame. 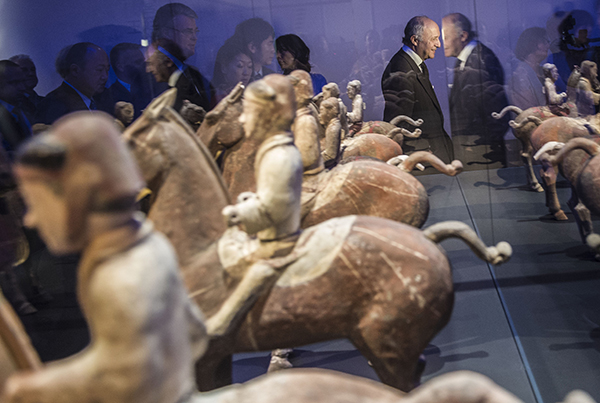 An exhibition of Chinese cultural relics from Han Dynasty (206 BC-AD 220) at the Guimet Museum in Paris in 2014. [Xinhua]

Macron had previously stated that the renovation of the badly damaged cathedral would be completed in time for the 2024 Summer Olympics in Paris, but the French government has remained careful about mapping out a specific plan for its renovation involving international partners.

In August, the independent California-based publishing company GoArchitect organized a worldwide competition on the future renovation plans for the destroyed roof. A blueprint drafted by two Chinese architects living in the United States stood out from nearly 300 plans and was awarded the winner — but has since yet to be selected as the official design.

Although the specific themes and time frame for Sino-French cooperation on Notre Dame Cathedral is yet to be formally set out, Chai Xiaoming, director of the Chinese Academy of Cultural Heritage, said China can not only contribute general ideas but also detailed technical plans for the upcoming renovation.

"China has a great deal of experience in renovating ancient buildings affected by fire, especially ones made of wood," Chai tells China Daily. "This means we could offer suggestions on how to approach the renovation of the oak-framed roof on Notre Dame Cathedral."

Speaking of the conservation of stone relics, Chai cited that his academy completed a decadelong research project at the Chengde Mountain Resort, a former royal resort of the Qing Dynasty (1644-1911) in Hebei Province and a UNESCO World Heritage site, where they tailored many solutions to damaged or weakened stones using techniques of traditional Chinese craftsmanship.

"For example, burning incense in traditional rituals has left thick layers of soot on many ancient Chinese temples," he adds, "So we also have a rich experience of cleaning ancient architecture, which might be useful to the work at Notre Dame."

Liu emphasizes that cooperation between China and France would benefit "mutual learning". 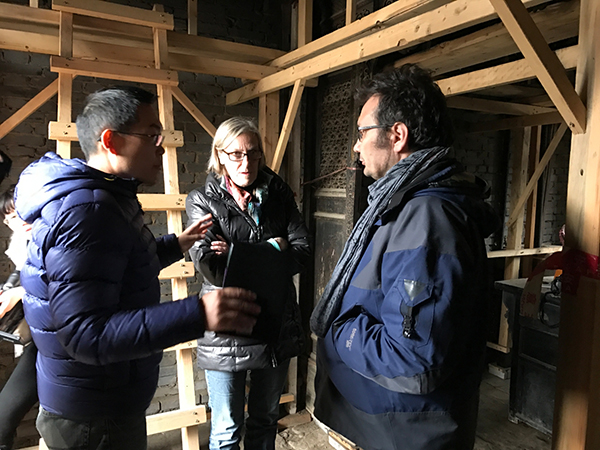 In 2016, experts from China and France worked together for conservation of Gongshu Hall, a Ming Dynasty (1368-1644) temple in Shaanxi Province. [For China Daily]

The joint declaration on Wednesday also outlined a bilateral project between France and China focusing on the 2,200-year-old Terracotta Warriors in Xi'an, Shaanxi province, at the Mausoleum of Qinshihuang, the first emperor of China.

"The Terracotta Warriors and Notre Dame are the most important symbols among the UNESCO World Heritage sites of China and France respectively," Liu says. "This collaboration shows our established relationship and highlights the mutual trust between the two countries."

According to Zhao Qiang, director of the Shaanxi Institute for the Preservation of Cultural Heritage, cooperative studies and conservation between the province and France began in 2016 to cover the renovation of Gongshu Hall, a Ming Dynasty (1368-1644) temple, and the stone carvings at Maoling, an emperor's mausoleum of the Western Han Dynasty (206 BC to 24 AD). 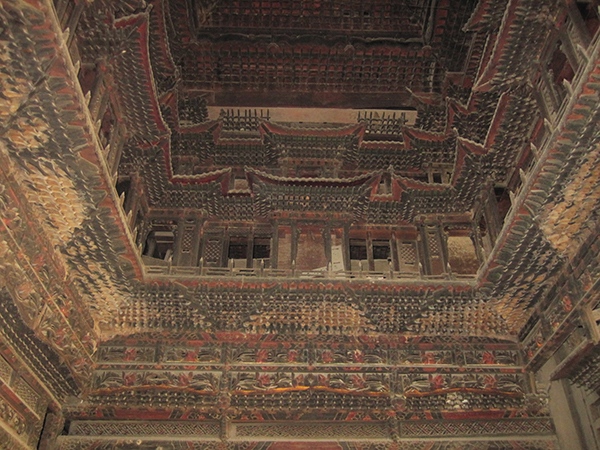 Gongshu Hall in Shaanxi Province is a highlight in recent years' Sino-French cooperation in cultural heritage. [For China Daily] 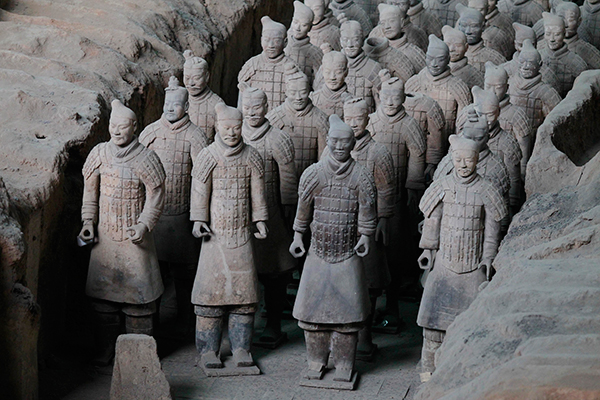 The cultural administrations of China and France jointly released a declaration on Wednesday in Beijing to kick off a program of bilateral cooperation to rebuild Notre Dame de Paris and conserve Terracotta Warriors in Xi'an, Shaanxi Province. [For China Daily/Zhu Xingxin]

During Macron's last visit to China in January, 2018, an intergovernmental agreement was signed to set up a comprehensive system of cooperation on cultural heritage, which was also signed in the presence of the two country's state leaders.

That agreement outlined measures to improve the management of UNESCO World Heritage sites, policy-making, the protection of endangered relics, cooperation on underwater archaeology and set up joint exhibitions. A campaign to tackle the illegal trade in cultural property was also unveiled.

"China is now regularly involved in joint projects in archaeology and the conservation of cultural heritage overseas," Chai says. "It has improved our capacity and deeply strengthened our efforts in international cooperation."

At Angkor Wat, the ancient Cambodian temple complex and largest religious monument in the world, experts from the Chinese Academy of Cultural Heritage and the Ecole Francaise d'Extreme-Orient, a leading French institution dedicated to the study of Asian societies, have been sharing resources for cooperative research programs over the past three years.

A program to renovate the ruins of the Royal Palace of Angkor Thom launched by the Cambodian government and led by a team of conservators from Chai's academy working alongside French scholars will also serve as an important reference point for the upcoming renovation work in Paris, Chai says.

"As a country with a rich experience in protecting cultural heritage and a long history of studying Angkor Wat, France has offered us great help," Chai says. "On the other hand, our mindset and traditional practices, which are different from the French side, also gained better recognition through this process of cooperation. This is the true meaning of cross-cultural communication."