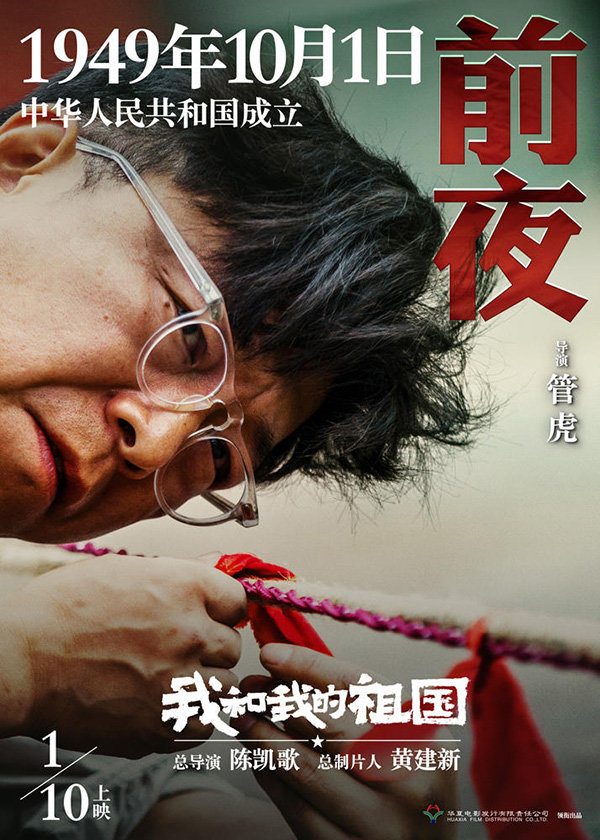 A poster for the film Me and My Motherland. [Mtime]

Me and My Motherland, an anthology film celebrating the 70th anniversary of the founding of the People’s Republic of China, released seven posters Wednesday showcasing seven historic moments in the past seven decades.

Released on the big screens across China Oct 1, the seven-part anthology has veteran director Chen Kaige at the helm, supported by six other top Chinese directors from different age groups including Zhang Yibai, Guan Hu and Wen Muye.

Featuring an all-star cast including Ge You, Huang Bo, Zhang Yi and Liu Tao, the film presents ordinary people’s stories that took places during milestone moments in the PRC’s history. It aims to reveal to the world what makes the world’s second largest economy tick.

“Monumental moments cherished in our national memories — that was the strong consensus in our production team on what we wanted to create in the film,” said Huang Jianxin, producer of the film.

When the film’s trailer was unveiled earlier this year, viewers responded emotionally, saying they teared up upon hearing the theme song Me and My Motherland. Brief clips of several scenes including the successful detonation of China’s first atomic bomb in 1964 and fireworks in the sky above the Bird’s Nest at the opening ceremony of the 2008 Beijing Olympics sparked pride and joy.