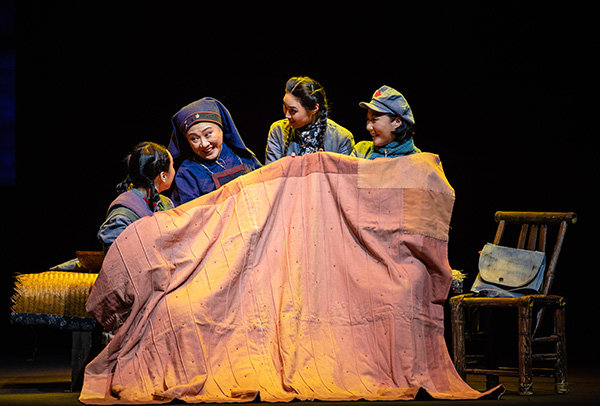 For the first time in the history of Peking Opera, four women recently performed a piece in the China National Peking Opera Company production, Stories of the Red Army.

The Peking Opera performance was one of the 51 productions showcased at the 12th China Art Festival in Shanghai.

Two performances took place at Shanghai's Majestic Theater on May 27 and 28.

For the show, the CNPOC brought together three stories based on events during the Red Army's epic Long March (1934-36), to create the modern Peking Opera, which premiered in Beijing on Aug 1, 2018.

"They are stories about the resilience and bravery of the Red Army during the Long March," says Song Chen, head of the CNPOC.

"You see in the play how these soldiers are ready to sacrifice themselves to help others. People will be touched by their faith and devotion."

One of the stories is about three women soldiers staying for a night at a farmer's home in Shazhou village in Rucheng county in Hunan province. They sleep in the home of a local woman named Xu Jiexiu, and feel sorry for her poor living conditions. When they leave the next morning, a soldier uses a pair of scissors to cut up the only quilt she has, leaving half of it for the village woman.

In this scene, the CNPOC did something unprecedented — introducing a quartet comprising three Red Army soldiers and the elderly villager woman.

Peking Opera styles have developed over hundreds of years, creating a wide range of roles, each featuring distinctive methods of performance and singing styles.

Yuan Huiqin, a veteran Peking Opera singer and deputy director of the CNPOC, says: "Every Peking Opera artist has his or her unique vocal expressions. It is not easy to bring together two artists from different schools in one song.

"Never before has there been a chorus in a formal Peking Opera piece."

However, Zhang Manjun, director of the production, says that Peking Opera - despite its long history and rich heritage - is no stranger to innovation and creativity.

"We saw lots of successful innovations in a series of modern Peking Opera performances on the revolutionary theme created in the 1960s. And we believe new creativity can be achieved, and successful innovation is recognized and accepted by audiences and critics as well."

In the chorus, three performers each adopt the singing style of one established school of female roles, or dan, to illustrate their different personalities.

The Mei school founded by Mei Lanfang (1894-1961) features excellent interpretation of grace and refinement. The Cheng school founded by Cheng Yanqiu (1904-58) is known for its whimper-like vocalization recognized as "soft and pleasing yet firm but gentle". And the Shang school created by Shang Xiaoyun (1900-76) features martial arts and heroic brave women.

Yuan who acts the elderly woman character of Xu Jiexiu, is the fourth singer in the four-minute song.

"Composer Chen Jianzhong went to great lengths to introduce elements of Chinese folk music and make sure the four singers retained their styles while creating a harmonious chorus," Yuan says.

"We spent a lot of time in rehearsals making sure this song was done properly."

Since the premiere of the show on Aug 1, 2018, the opera has staged more than 20 performances, touring cities the Red Army passed through during the Long March.

"We worked it out eventually, the four of us, after so many stage performances," Yuan says.

"We have borrowed a little choral-singing technique and figured out how to make sure everybody's unique sound is heard while creating a harmonious chorus."

The CNPOC's Song says: "As China's national Peking Opera company, we shoulder the responsibility of keeping the bar high and setting an example for colleagues in the rest of the country.

"We pulled together talent from the whole company in order to create Stories of the Red Army, and to make sure that the narrative, stage design and music performance are up to the mark.

The innovation, Song believes, is successful, as it respects the principles of Peking Opera art and explores modern harmony.

Jing Junmei, a theater critic based in Beijing, praises Stories of the Red Army for its portrayal of "ordinary stories of ordinary people".

"It enables audiences to really feel the spirit of their time, which is the most inspiring thing about this production," Jing says.