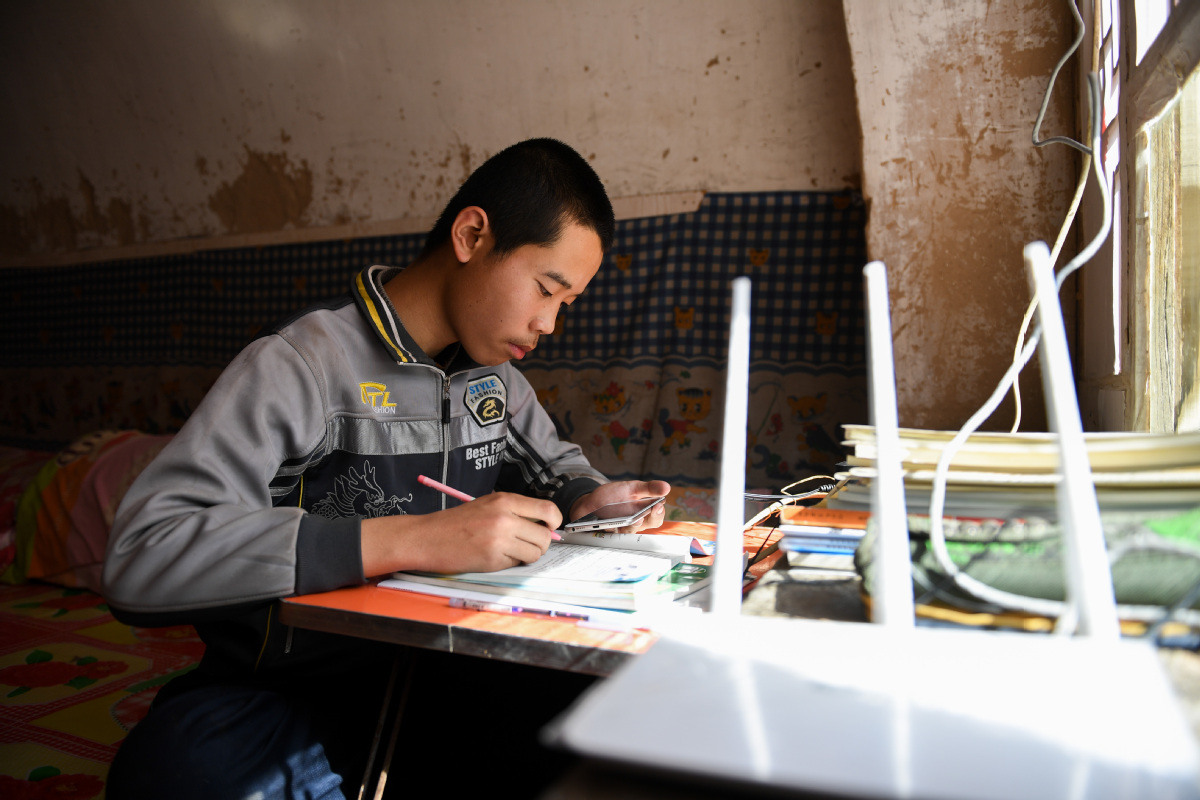 A student uses a mobile phone to attend an online class at home in the Inner Mongolia Autonomous Region this month. His home was recently connected to the internet. [Xinhua]

With schools and colleges closed, lessons via the internet and TV are ensuring no one falls behind. Zou Shuo reports.

As millions of students remain homebound as a result of the novel coronavirus outbreak and need to take classes online, some are unable to log on because their homes do not have an internet connection.

The challenge can be even harder for students in remote rural areas, where internet access is often poor and they have to find creative ways to continue studying.

Online classes have become a quick solution for teachers grappling with the results of the contagion that hit the country hard and fast. The Ministry of Education has encouraged schools to provide internet lessons to keep millions of students occupied in light of the suspension of classes.

Since February 17, a national cloud-learning platform has provided educational materials for students at middle and high schools, according to the ministry, which said the platform is intended to provide resources for students, but is not meant to replace full-time classroom learning.

At the same time, classes for primary school students are being broadcast on Channel 4 of China Education Television.

The division of learning platforms for students at different levels is intended to limit the amount of time primary school students spend online and protect their eyesight. It also aims to prevent the network from becoming congested by too many students going online simultaneously, the ministry said.

However, some people are questioning whether the fervent drive to push classes online will result in students being left behind.

As students have been asked to tune into lessons livestreamed via phone apps, type questions as real-time messages and submit homework through WeChat, the country's stark digital divide makes it hard for some.

While about 854 million people have access to the internet, for some disadvantaged families, data plans don't come cheap. The cost of streaming hours of online classes on a smartphone can quickly add up, and not everyone has broadband, Wi-Fi or even a TV set at home. 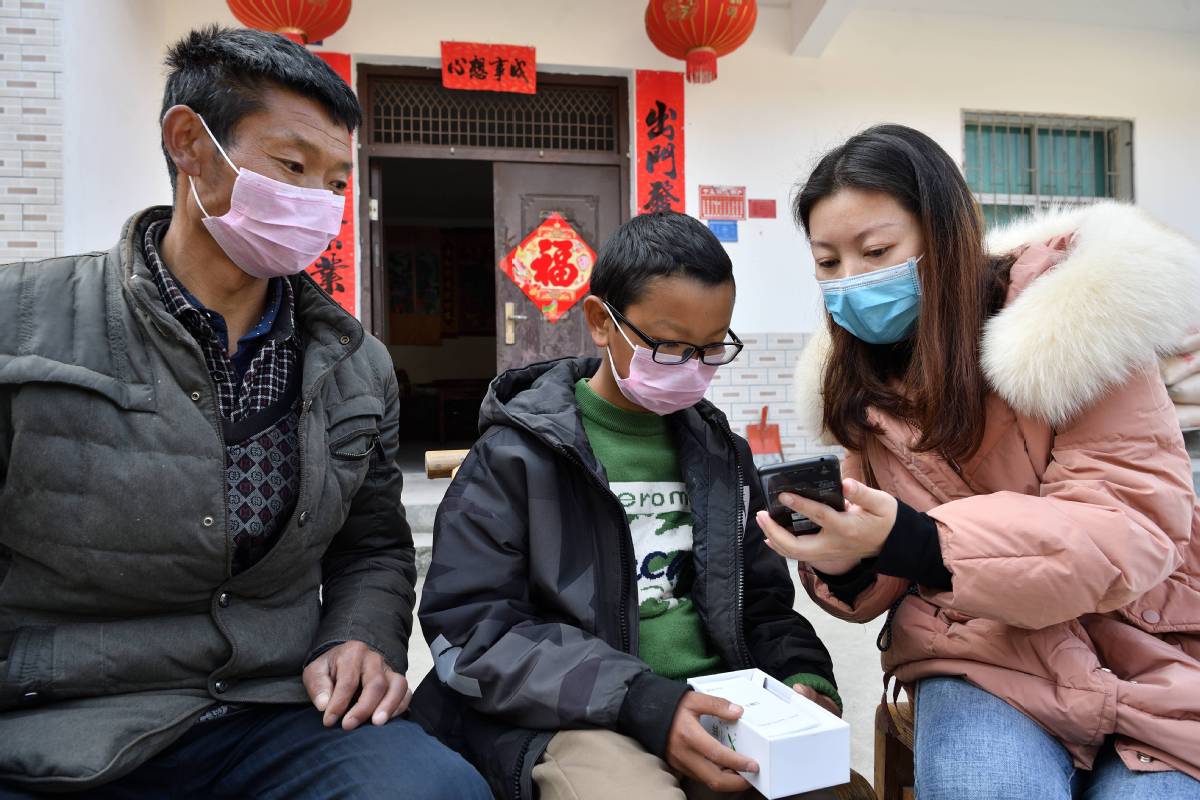 A primary school teacher shows a boy from an impoverished family how to use a mobile phone to study online in a remote area in Hubei Province in March, 2020. [For China Daily/Yang Tao]

A mother in Changyang county, Hubei Province, has built an anti-coronavirus tent for her daughter from bamboo strips and plastic sheeting so the girl can study outdoors safely during the epidemic, according to a video posted on the People's Daily's Sina Weibo account.

Bi Mengqi, the woman's 7-year-old daughter, has to attend online classes every day from their rural village.

Because the internet connection in their house is poor, the mother decided to erect the temporary classroom as protection for the girl when she takes lessons outside.

Bi's mother took the girl's mobile phone and went around the village to test the speed of the internet. Eventually, she discovered a spot near the entrance of the village where her daughter could study effectively, and decided to erect the temporary shelter.

She accompanies her daughter when she studies in the tent every day, and they always wear face masks throughout the process to prevent cross-infection.

Further afield, Slang Bazhen, a 22-year-old college student in Changdu, Tibet Autonomous Region, used to walk for 30 minutes up a snow-covered mountain to find a signal and access her online lessons amid the outbreak.

She used a rock as a seat and balanced her notebook on her lap.

Her school, Jiangsu Food and Pharmaceutical Science College, started online classes on February 17, so Slang sometimes stayed at the summit of the snow-capped mountain for four hours at a time.

"The temperature is about 3 C at noon, and it's colder in the morning and at sunset, but I am used to the cold," she said.

"It is good to see the teachers and my classmates. Although it was not easy to take the classes, I did not want to fall behind with my studies."

Slang's sister filmed a video of her studying, which attracted widespread praise on social media platforms.

When the local telecommunication administration learned about the situation, engineers were sent to Slang's village to check and repair the internet on February 25.

The three major telecommunication companies in Jiangsu Province also pledged to offer free data packages to all impoverished students at the school.

Slang wrote a WeChat message to express her thanks to the people who helped her obtain internet access at home.

However, only half of her students' families have cellphones or computers, and although Guangxi has started airing classes on a local TV channel, not all the students have access.

"More than 70 percent are 'left-behind children', who are looked after by their elderly grandparents while their parents are working in big cities," Meng said.

About 20 percent of the students have no access to the classes because they don't have the necessary equipment, she said.

"Many students have called me and asked when they can return to school," Meng said. "They are afraid they may fall behind in their studies."

Some students initially liked the idea of having classes on cellphones because their parents usually forbid them from playing with the devices for extended periods, she said.

However, the excitement and novelty were quickly replaced by a feeling of inconvenience due to the paucity of communication between students and teachers, Meng said.

She added that the teachers have returned to school and started preparing for the new semester and helping to sterilize the campus.

"We are ready to greet and welcome the students once the epidemic is over," she said.

On March 6, the ministry issued a notice ordering local education authorities and schools to help solve any technical challenges faced by students with relation to online learning.

Schools and education authorities should conduct thorough research on the difficulties students have encountered in online study, and should offer targeted and specific help to those in need and make sure no one is left behind in online learning, it said.

Xiong Bingqi, deputy director of the 21st Century Education Research Institute in Beijing, said although the students' strong determination to overcome study difficulties is commendable, schools and education authorities should learn about those difficulties before deciding to launch online courses.

Instead of encouraging students who do not have internet access or a TV at home to go out to study, education authorities should work with other government departments to help them obtain such access, he said.

It is not feasible, and it is lazy policy by the education authorities to ask all students to attend online classes, he added.

If students do not have access to the internet or a TV, schools and teachers should offer alternative methods of education, such as mailing textbooks, calling students on the phone or even making home visits when the epidemic is overcome to ensure no one has been left behind, he said.