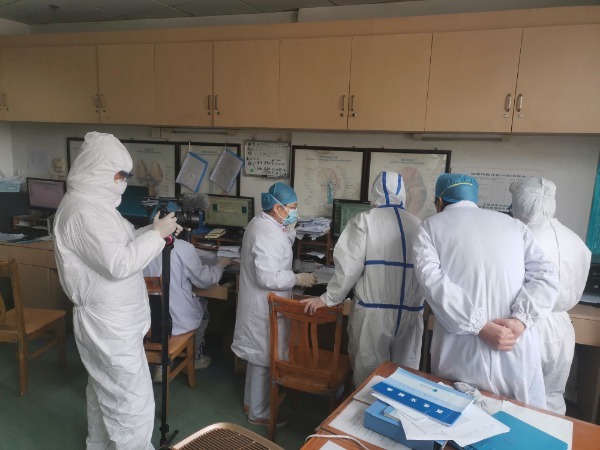 A new documentary opens with contrasting scenes of empty streets and busy medical workers at a crowded hospital, working around the clock to save people's lives.

Perhaps, every viewer who has been inundated by the complex emotions related to the novel coronavirus outbreak over the past two months, will immediately tune in to the mood of this new production from Chinese streaming platform, Youku.

"This is Wuhan, my home. No one expected the city to encounter this," actress Xu Fan — born in the capital city of Hubei Province, the former epicenter of the outbreak — states in the opening lines of the narration.

"The city is in a standby mode. It waits to be restarted," her voice is steady and her words neutral and precise.

The three-part online documentary is titled Dong Qu Chun Gui (Spring Returns When Winter Passes) because its production team believes that "there is no spring that will not return however long a winter is."

The pilot episode aired on March 8, as spring of 2020 actually began to arrive, marked by a warmer weather and the blooming of blossoms. The remaining two episodes will be broadcast later this month.

It aims to offer a panoramic view of people's lives under the conditions imposed by the viral outbreak "in a calming tone" as Zhang Wei, director of the documentary department of Youku and executive producer of the series, says.

"We don't want to deliberately arouse feelings of sentiment in people," Zhang tells China Daily. "We just want to record the real situation. In our documentary, there are difficulties for those involved in this outbreak, but it reveals warmth and positive energy as well."

Zhang understands the challenge. On the one hand, production of a documentary requires good preparation, which usually needs a long time, yet on the other hand, they are also running against the clock, and need to rush to capture the latest news from the front line.

On January 28, he decided to send a team to Wuhan. It was only about one week after the outbreak first began to garner nationwide attention. After getting special permission to shoot, the team arrived in the city a few days later to prepare and cameras began rolling on February 9, making Youku the country's first online media platform to produce its own documentary about the ongoing situation.

Cao Junlong, field producer of the documentary, confesses he felt fear when he stepped off the high-speed train into the empty railway station.

"This city should have been bustling," Cao says in an online interview with China Daily. "The emptiness made a chill run down my back. The city's streets were lit up at night, but there were no passersby as we drove. We could feel the crisis being faced by this city."

After the initial shock, the crew's emotions were soon soothed by the local residents' devotion to dealing with the crisis, which is reflected in their footage.

For instance, there's an optimistic restaurant owner who has sold Wuhan hot dry noodles for over 40 years and chooses to remain open despite the scarcity of customers.

Then, there are volunteer drivers, who shuttle medical supplies and staff around the city, or community workers who endure elongated working hours to make sure those under home quarantine get enough food and their daily necessities. For many people, work has partially resumed in one form or another, such as participating in meetings online, and they continue to hone their cooking skills.

Recording these subjects was challenging at times, but the real difficulty was filming in the hospitals.

The crew took 80 protective suits and plenty of masks to Wuhan and they rigidly followed quarantine and sterilization rules. Cameras were fully covered by layers of plastic wrap and microphone socks were discarded immediately after leaving the wards, the continuous sterilization using alcohol had cost them two sets of lenses.

Despite all of the preparation, when they approached the ICU wards, feelings of fear and trepidation inevitably began to rise.

"We followed the medical workers and passed through one gate after another to enter the 'red area' (wards for critical patients)," Cao recalls. "Frankly speaking, it felt like we were moving toward the front door of Hades.

"However, when you actually enter the area and see the constant hustle and bustle, and hear the buzz of medical instruments, you understand that it is a battlefield."

Kang Chengye, director of the documentary, has entered the "red areas" five times.

"Here, relations among people are extraordinarily harmonious," Kang says. "No one complains or loses their temper. Patients take every opportunity to show gratitude. Medical workers write words of blessing and their nicknames on their protective suits. Once they leave the wards, they cheer up and tease or joke with each other."

The doctors checking the wards every day also take the role of "messengers." Sometimes, members of the same family get infected and are quarantined in separate rooms. As they cannot contact each other, doctors will ferry news and messages back and forth between them.

"In the most dangerous place, you'll find the warmest part of humanity," Kang continues. "It's easy to be influenced by this atmosphere, one that can encourage us to be better people in the future."

However well they are prepared for filming, on the wards, unexpected situations arise from time to time. They have to remain alert to capture the touching moments.

Kang recalls that, one time, a group of doctors became excited when they heard that a patient, who was in coma, began to cough. However, less than three minutes later, Adrenalin was high as they were forced to react to another patient whose heartbeat had stopped. When that patient was stabilized, following a five-minute cardiac resuscitation, the doctors were too exhausted to even speak.

"But I saw tears in some of their eyes," Kang says. "The destiny of life and death is often determined in minutes. For me, this will be a lifetime memory."

Filming began as the campaign against the virus was at its toughest point, and the crew was able to capture the stories of many of the medical teams from across the nation who headed to the city to help.

Now, as the outbreak is brought under control and makeshift hospitals are finally closed, the crew also films some of them as they prepare to withdraw from Wuhan.

"When a medical team is leaving, the last member getting on the bus notices that we are shooting," Cao, the field producer, says. "They often ask the driver to open the door, get off the bus and come over to say hello to us."

For that reason, he wants to present the documentary to the "heroes without halos."

However, Xu Lyuye, a doctor based in Wuhan, told Cao: "I don't think I'm a hero. It's just my job. If it was your job, would you avoid it? Everyone just wants to do their duty."

Though Zhang, the executive producer, does not reveal the specific stories being told in the remaining two episodes of Dong Qu Chun Gui, he reveals that they will cover cities other than Wuhan, including metropolises like Beijing and Shanghai and smaller cities like Nantong in Jiangsu province, to reflect how the lives of Chinese people all over the country have changed because of these extraordinary circumstances.

Additionally, Youku also has crews in the United States and Africa who will record how people in those countries are fighting against the coronavirus pandemic.

"When we launched the project, we didn't expect novel coronavirus to become a pandemic," Zhang says. "We only thought it might be better to include an overseas perspective. However, the current situation in the world proves the global significance of a joint effort."

As for the crew in Wuhan, they have to stay in the city for a while longer, and not just because of the quarantine regulations.

"I believe there are many more stories in the city which are worth telling," Zhang says. "We want to follow-up and record how people in the city recover, physically and psychologically, and how local society will resume."

Since spring has finally arrived, perhaps, that day is not too far away.