Classrooms Reopen in Xinjiang with Wishes, Wariness As Epidemic Wanes 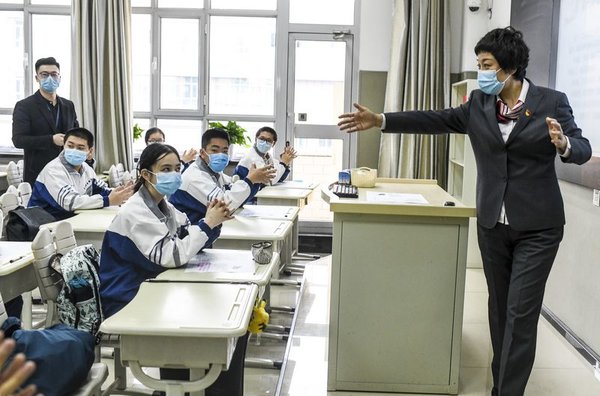 It's the first day of school in Xinjiang amid the epidemic.

URUMQI, March 16 (Xinhua) — Eighteen-year-old Cao Jianing got up especially early on Monday morning, a day she has been looking forward to for weeks.

For the graduating senior high school student in northwest China's Xinjiang Uygur Autonomous Region, Monday's classes are different from those she has taken over the past two weeks: They have finally shifted from online to offline. 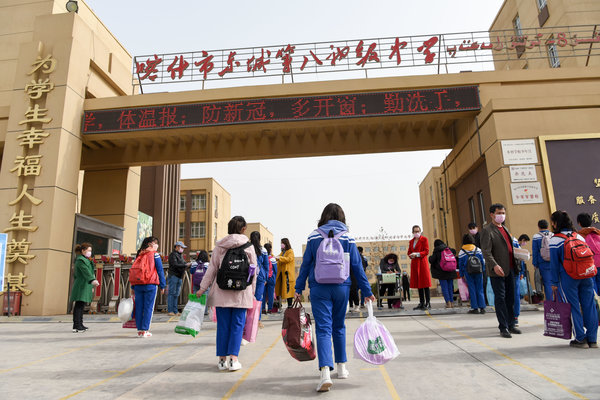 Students go to back to their classrooms at the Dongcheng No.8 Junior High School in Kashgar, northwest China's Xinjiang Uygur Autonomous Region, March 15, 2020. [Xinhua/Ding Lei]

Monday marks the first day of offline schooling of the new semester for some 510,000 students like Cao in their final years of senior and junior high schools and vocational schools in Xinjiang, one of the first provincial regions across the country to reopen classrooms amid the novel coronavirus disease (COVID-19) epidemic.

Official data showed that no new confirmed cases of COVID-19 have been reported for over 20 consecutive days in the region, prompting an acceleration in the resumption of life and work.

Cao's school, Urumqi No.1 Senior High School, is just across the street from her rented apartment, but the sudden COVID-19 outbreak had stranded her short daily school commuting, as local authorities postponed the opening of classrooms over public health concerns.

During the temporary shutdown, Cao studied at home to prepare for the gaokao, the annual college entrance exam. She took online classes and practice exams organized by the school. "I really missed the feeling of sitting in the classroom with my teacher and classmates around."

"It keeps you concentrated. Who knows if someone is clocking in for the online classes in bed," she joked.

Now Cao, in her neat uniform, is back in the classroom, but there is a lot of caution being taken. 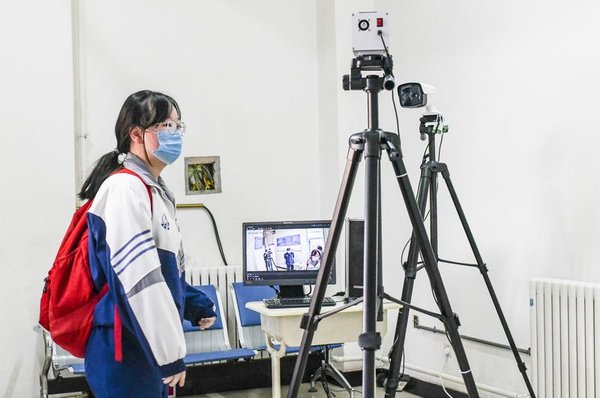 A student has her body temperature checked before entering the classroom at the Urumqi No.1 Senior High School in the capital city of Xinjiang Uygur Autonomous Region, northwest China, March 16, 2020. [Xinhua/Wang Fei]

Each class is limited to 30 students, seating is staggered and temperatures are taken three times a day. All the classrooms, canteens and dormitories are disinfected regularly, while closed-off campus management has been adopted to reduce imported infection risks, according to Tian Yun, head of the school's educational administration office.

Wearing a mask and filled with renewed determination, Cao had the first class of the renewed school life: tips on easing stress and anxiety during a unique exam preparation amid the epidemic.

"It's good to be back. I feel that I'm not fighting alone," she said. 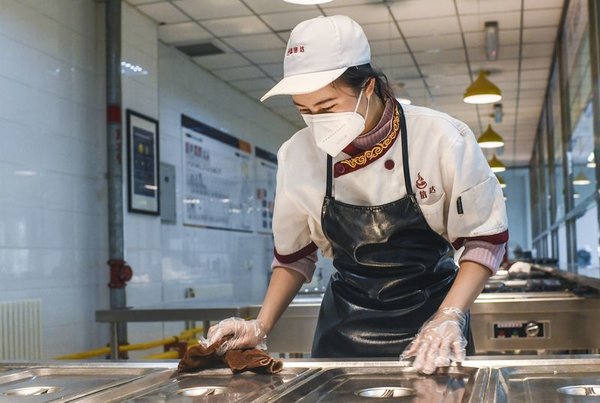 A staff disinfects the canteen at the Urumqi No.1 Senior High School in the capital city of Xinjiang Uygur Autonomous Region, northwest China, March 15, 2020. [Xinhua/Wang Fei]

China said last week that the peak of the current COVID-19 outbreak at home is over as new cases keep declining and the overall epidemic situation remains at a low level across the country. Life and production are picking up pace in returning to normal.

As the epidemic's risks dim in other parts of China, more schools will resume classes. Southwest China's Guizhou Province also resumed classes for graduating students Monday, while some schools in northwest China's Qinghai reopened even earlier.

The majority of the country's local governments haven't decided the date for school resumption, which would be carried out based on local epidemic control developments and in a phased manner. School reopening for graduating students in junior and senior high schools will be prioritized, while that for college students might be considered at a later time due to cross-region transmission concerns.

It's still up in the air whether the gaokao will be postponed due to the epidemic, but Cao said she would race against time to prepare for one of the most decisive tests in her life.

"I wish the epidemic would end soon and I could score high enough to attend Peking University (one of the best universities in China)," Cao said.