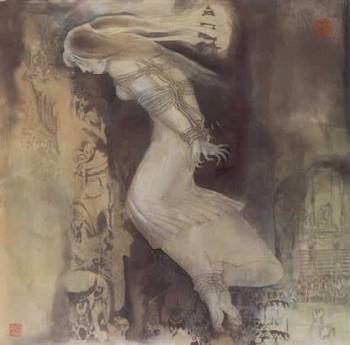 Empress Ling of the Northern Wei Dynasty, daughter of Hu Guozhen, a hereditary Earl of Wushi, was a consort of Emperor Xuanwu. She was said to be literate and capable of making quick decisions.

It was a tradition of the Northern Wei's that when a crown prince is created, his mother must be put to death, the imperial consorts often prayed not to have a crown prince or princesses. However, Consort Hu felt differently, because she did not want to see the empire go without a crown prince. When she became pregnant, her friends inside the palace suggested that she have an abortion. She refused, saying that she would rather die and be the mother of a crown prince. In 510, she gave birth to a son, Yuan Xu. As Emperor Xuanwu had lost several sons by this point, he carefully selected experienced women to be Yuan Xu's nurses, and prohibited either Consort Hu or his wife Empress Gao from seeing the son. In 512, Emperor Xuanwu created Yuan Xu crown prince, but, abolishing the custom of putting the crown prince's mother to death. Consort Hu’life was thus spared..

Empress Dowager Hu began to decide national affairs. She ordered to set up a channel for ordinary people to file complaints against corrupt officials. She constantly visited prosperous areas and heard complaints there in person. She either gave immediate answers or transferred the cases to concerned judicial department.

For the recommended low-level officials, Empress Dowager Hu would test them in person and decided on their service accordingly.

The northern dynasty was a powerful empire at the time. The storage was abundant. Empress Dowager Hu once asked high-level officials and members of the royal family to take silk from the storage room for free. One could get whatever he or she could take. Most people tried to carry as many as they could. Some even tried to take away more than 200 bolts of silk. Princess Changle carried 20 bolts and General Cui Guang picked only two bolts. When Empress Dowager Hu suggested that they take more, they thanked her and replied that they had enough.

By this time, Emperor Xiaoming, aged 18, was tired of the hold his mother had on his administration, and he further despised Zheng Yan. He therefore sent secret messengers to general Erzhu Rong, who controlled the region around Bing Province (modern central Shanxi), ordering him to advance on Luoyang to force Empress Dowager Hu to remove Zheng. The news leaked out. Zheng therefore advised Empress Dowager Hu to have Emperor Xiaoming poisoned. She did so, and selected a two-year old boy to succeed the previous emperor.

General Erzhu Rong refused to recognize the new emperor. With support from his associates, he let his army advance on Luoyang and issued a harshly worded statement accusing the royal family of poisoning Emperor Xiaoming. Luoyang's defenses collapsed. The officials and generals abandoned Empress Dowager Hu and fled.

Empress Dowager Hu was a talented ruler herself. However, it is hard to judge her reign as either a success or failure.