Sign in  Register
Give Your Comments
NewsletterClose
People / Inspiring Females 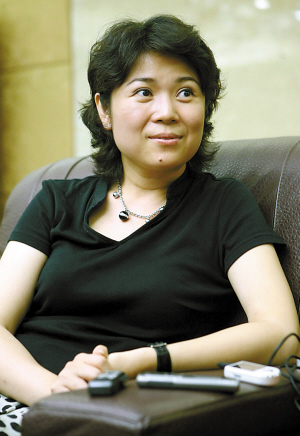 Wearing a white skirt with black dots, holding a fashionable satchel in her hand and sandals on her feet, and black nail polish on her toes, a completely fashionable lady stood before the reporter. However, she has a familiar mole on her chin and an expression on her face that looks very much like Mao Zedong ---- and she is Mao Zedong's granddaughter, Kong Dongmei, who is the only granddaughter of Mao Zedong. After alighting from the plane yesterday, she went straight to to make the final preparations for the upcoming opening of The Great Men Exhibition to commemorate the 70th Anniversary of the Victory of the Long March today.

The Descendents of Mao Zedong, Zhou Enlai and Zhu De Will Attend the Exhibition

“In memory of my grandfather, I have done two things this year: First, I have written a book, Those Days Changed the World Mao Zedong’s Conversations about Diplomacy with Wang Hairong. Second, I am holding this exhibition. Both my grandfather and grandmothers walked forward during the Long March, and I, as their descendent, have a deep feeling for that phase of history.” For Kong Dongmei, 2006 is a very special year. It is the 30th anniversary of the death of her grandfather, Mao Zedong, and it is the 70th anniversary of the victory of the Long March. So the Truly Great Men Exhibition is important to Kong Dongmei. She told the reporter that her mother, Li Min, the descendents of Mao Zedong, Zhou Enlai and Zhu De will also attend the opening ceremony of the exhibition today. She said, “Tomorrow will be an extremely grand and special day. We, the descendents, will gather here to commemorate this special moment.” She said that the descendants of the three great persons frequently participate in activities together, so they know each other very well and have good relationship.

Looking for History in the New Book

Kong Dongmei has also come to this time to promote and sell her new book,   Those Days Changed the World —— Mao Zedong’s Conversations About Diplomacy with Wang Hairong. This book is the third one in the ’s First Documentary of Red Family’s history series, which is being promoted by Kong Dongmei’s cultural communication company.

“Wang Hairong, the first Chinese female minister of foreign affairs, is also my grandfather's nephew’s granddaughter, and she is from my generation. She has also broken several dozen years of silence and spoken with me about many things that happened in the past when China and America first established diplomatic relation.” According to the Kong Dongmei,, in her grandfather’s late years, Wang Hairong participated in almost all his significant diplomatic decisions and diplomatic meetings. In her book, Kong discloses many secrets such as conversations between Mao Zedong and Snow, secret meetings with , ’s return to the United Nations, Nixon’s visit to , and the Shanghai Declaration.

“Unlike my mother, who has her own experiences and recollections of my grandfather, in the book, I have to narrate that phase of history as a historian.” Kong says repeatedly that she describes the past and the characters with a modern and feminine point of view. Because of this, she thinks that her first two books, Open My Family’s Old Photo Album -- Grandfather Mao Zedong in My Heart and Grandmother’s Recollections - - Mao Zedong and He Zizhen are  popular. She has followed her ancestors and written her own journey. “I have neither pieced together nor excerpted other works, nor have I used the opinions of statesman and historians. There were many things I did not understand, even about my grandfather and grandmother. I told the reader I would seek the answer to what I did not understand, and I found many answers.”

In recent years, Kong Dongmei has appeared in front of the media more and more frequently. Before, she was unknown, and spread New Red Culture and was the president of Beijing Dongarun Juxiang Bookstore. “I want to promote New Red Culture because traditions need to be inherited, and the youth should not forget history.” In reference to the pop culture phenomenon, Super Girl, Kong Dongmei believes that only if the youth know history can their lives be completely full.

Kong Dongmei thinks that the youth will inherit the tradition from a cultural point of view rather than through political propaganda: “This is precisely why I promote New Red Culture.”

My Status Not Really helpful in Business

Reporter: You are devoted to researching classical Red Culture. On one hand, it is a socially efficient way of educating the youth today. And on the other hand, is it a management of economic efficiency?

Kong: It is for now. Both aspects should be done well. Red Culture will not last long without vitality.

Reporter: There has always been a lot of attention on your status. When you came to to promote and sell Open My Family’s Old Photo Album -- Grandfather Mao Zedong in My Heart, you were known only as Mao Zedong's granddaughter. Did you need to adapt to being in the public eye from being low key?

Kong: I am always low key. My family members are unassuming. Actually, I did not care about it very much when I worked in finance. My classmates in the did not know about my background until they found it out themselves. Now that I work in cultural promotion in my own company, sometimes I have to go into the public eye, but I just want to be able to do my work.

Reporter: You have your own company now. Has being Mao’s granddaughter helped you in business?

Kong: People pay a lot of attention to our family and wonder what our lives are like. I think that this supports and helps me. But if you mean substantive help, such as has someone invested several million in my company or done me any special favors, no. I believe that the market is fair, and if you cannot succeed on your own, that’s your own problem.

Kong Dongmei was born in 1972. Her grandmother is He Zizhen and her mother, Li Min, is the eldest daughter of Mao Zedong. Her father, Kong Linghui, is the son of Kong Congzhou, the  artillery Assistant Commander of the People's Liberation Army.

She graduated from Beijing University of Aeronautics and Astronautics in 1996, and later went abroad to study in the Now, she is a phD student at and the president of Beijing Dongrun Juxiang Bookstore.