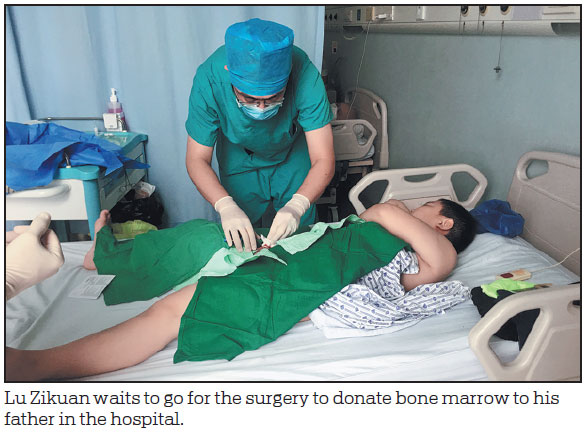 Lu Zikuan waits to go for the surgery to donate bone marrow to his father in the hospital. [For China Daily]

In order to donate bone marrow and save his father, an 11-year-old boy gained 15 kilograms in three months. Now, the boy is setting out on a new course to lose weight.

However, when the boy decided to be a donor in March, he only weighed 30 kg. It was impossible to have the operation until he met the weight requirement. 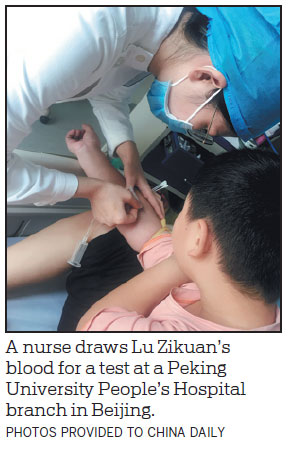 His father, Lu Yanheng, was diagnosed with myelodysplastic syndrome, an early stage of leukemia, in 2012. His doctor suggested that he had a bone marrow transplant, but he refused to have one because of the high cost.

However, his condition worsened in July last year and having a transplant became urgent for him. Fortunately, Lu Zikuan — one of his three children — was a match.

Though Lu Zikuan was told that bone marrow donation required several injections and that his blood would be drawn many times, he did not hesitate.

"Since my father can't support the family, I should be a 'little man' and take responsibility until he recovers," he said. "I have a lot of blood. Draw mine."

In order to meet the weight requirement for the surgery, Lu Zikuan changed his diet. For breakfast, he ate three eggs, one big steamed bun, a bowl of porridge and a carton of milk. For lunch, he ate a bowl of braised meat, rice and vegetables. In the evening, he had two portions for dinner which included meat, boiled eggs, noodles and milk.

In a video that had more than 10,000 likes on Sina Weibo, the boy put rice and meat into his mouth with his cheeks bulging. After that, he was seen eating a sausage.

"I would only put down my chopsticks when I could no longer eat," he said.

After every meal, he would quickly stand on the weighing scale, read out the number on the scale loudly, and became pleased with how heavy he was. If he ate too much, he would lie down in his room tossing and turning, and would drink some hawthorn water to help him digest the food.

In April, Lu Zikuan became 5 kg heavier after eating for a month. In July, he was finally able to have the operation as he weighed 48 kg.

Around the same time, his father received about 900,000 yuan ($126,990) through crowdfunding, solving the treatment expense problem.

On Sept 9, the operation went smoothly at a Peking University People's Hospital branch in Qinghe, Beijing.

The boy became very weak after the operation, and is still recuperating in hospital. Both father and son speak to each other over the phone.

"My task is complete, so it's now up to you," Lu Zikuan told his father.

The boy now feels relaxed as he only needs to eat three meals a day with only half a bowl of rice each meal.

His father, who is also recovering in the hospital, said he owes his son so much.

He said his son has been very sensible from an early age. As the family had not been well-off for a long time, the boy never mentioned buying toys or new clothes. He also hardly asks his parents for pocket money.

"I was not in good health and had no time to take care of my children, but he never bothered me with his studies. His grades have always been within the top five, and he's still the class monitor in school," Lu Yanheng said.

"I really want to get better sooner and take my children to play in the mountains. He has been through a real tough time with me," he continued. "I hope he will have a good rest after the operation, and be at his normal weight again."