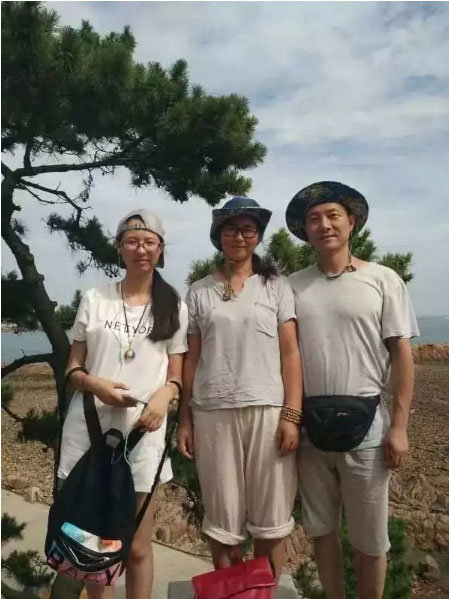 A young woman who was stabbed eight times while protecting her classmate has become a heroine among Chinese netizens.
It has also emerged that the woman comes from a family of heroes.
Cui Yiwen, 20, is a student at the Guilin University of Electronic Technology in Linchuan county, Guilin, South China's Guangxi Zhuang autonomous region.
She has returned to her studies after she sustained her injuries in March.
Cui and a female classmate on March 10 were walking through a playground to their dormitory when a male classmate stopped Cui's classmate and began beating her, according to Lingchuan police.
When Cui struggled to separate them, she found that the man had a knife. Cui was injured during the struggle, while the man still managed to catch her classmate and stab her.
Cui shouted for help and tried to help her escape, using her own body as a shield. The man finally escaped when other students started to rush to the site.
Cui sustained a wound to her abdomen, and her chest, liver, gallbladder and back were also injured. Her classmate was stabbed 15 times. Fortunately, they both recovered.
The assailant was caught by police. He is the ex-boyfriend of Cui's classmate.
Cui's use of her body as a shield has moved a lot of netizens. One named Shenlan commented that many men may not protect others in the same way Cui did.
Where does Cui get her courage from? "If I did not do that, she would die." She said she is the child of a military man. "My father is an upright serviceman. I just live on his expectations."
Her father, Cui Hongwei, was a serviceman stationed in Fenghua, East China's Zhejiang province, when he was hurt badly by a steel cable as he covered others to escape during a mission at sea in December 2001.
Cui Hongwei suffered a rupture of a tendon in his left leg, a fracture of his right calf, and many other wounds. Doctors carried out three major and more than 30 small surgeries to save his two legs, fearing that he may never stand again.
After resting in bed for three years and under the care of his wife, Hu Meiyun, Cui's father finally stood and walked in May 2004.
Hu, who supported the family by running a kitchen goods store, said it was her daughter's choice to save her classmate, and that she is proud of her.
(Source: chinadailiy.com.cn)