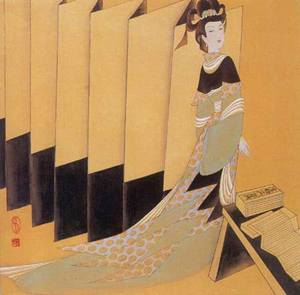 Empress Feng (442-490) formally Empress Wenming (literally "the civil and understanding empress") was an empress of the Northern Wei Dynasty. Her husband was Emperor Wencheng. After her husband's death in 465, she became regent over her stepson Emperor Xianwen and remained as such until his adulthood. While Emperor Xiaowen assumed imperial powers upon adulthood, he remained very deferential to her, and she was highly influential until her death in 490.

The Empress Feng was born in 442. After Emperor Wencheng became emperor, she became his concubine in 455, carrying the rank of Guiren. In 456, she was made empress.

During Emperor Wencheng's reign, he decided on officials according to their talents instead of their ethnic groups. Many officials from the Han ethnic group were recruited as high-level officials. The society was stable at that time. Empress Feng was deeply influenced by such a way of recruiting officials. She continued to do so after the death of the emperor.

In 465, Emperor Wencheng died. He was succeeded by his 11-year-old son Tuoba Hong the Crown Prince, and Empress Feng was honored as empress dowager. Two days later, as according to Northern Wei custom, Emperor Wencheng's personal possessions were burned. While the ceremony was conducted, Empress Feng, in sadness, jumped into the fire. She was saved by the guards. Meanwhile, political power soon fell into the hands of the official Yifu Hun, who proceeded to execute many other key officials and effectively assumed regency. In spring 466, however, Empress Dowager Feng staged a coup and Yifu Hun was arrested and executed. She assumed regency over the young Emperor Xianwen's regime.

In 467, Emperor Xianwen's concubine Consort Li bore his eldest child Tuoba Hong, and Empress Dowager Feng personally raised the young prince. She soon terminated her regency and returned imperial powers to Emperor Xianwen, who was 13 years old at this point.

While Empress Dowager Feng was no longer regent, she appeared to remain fairly influential during the reign of her stepson Emperor Xianwen. However, in 470, an event occurred that would damage their relationship. Empress Dowager Feng had taken the official Li Yi as her lover. In 470, the official, who was a close friend of Li Yi's brother, was accused of corruption. Emperor Xianwen became aware of the accusations. He had known about his stepmother's relationship with Li Yi and, while he had not taken any actions against it at that point, disapproved of it. He sentenced the official to death, but then informed him that if he could report on crimes that Li Yi and his brother had committed, he would be spared. After initial reluctance, he did so. Empress Dowager Feng became resentful of Emperor Xianwen after that point.

After Grand Empress Dowager Feng reassumed regency, she was said to be more dictatorial than she was before, but intelligent in her decisions and frugal in her living. Not only was she highly literate, but she also was capable in mathematics.

In 486, Grand Empress Dowager Feng took measures to push her reform forward. Before the reform, regional magnates served administrative function for the government. The reform replaced them with officials in three categories, including five families constituting a neighborhood, five neighborhoods a hamlet, and five hamlets a commune.

Grand Empress Dowager Feng encouraged education and a better lifestyle for the Han ethnic group. The positive influence of these measures include a larger tax and tribute revenue for the state, a tighter control of the peasant households, a consolidation of the central state power and of the social structures. The reform integrated Tuoba and other non-Han ethnic groups into the Chinese majority. It helped the national economy to recover after centuries of warfare and calamities.

The power-sharing arrangement between step-grandmother and step-grandson could perhaps be illustrated by an incident in 489, when Emperor Wencheng's younger brothers Tuoba Tianci, the Prince of Ruyin and Tuoba Zhen, the Prince of Nan'an were accused of corruption, a death offense. Grand Empress Dowager Feng and Emperor Xiaowen jointly convened an imperial council to discuss their punishment. Grand Empress Dowager Feng opened by asking the officials, "Do you believe that we should care about familial relations and destroy law, or to disregard familial relations and follow the law?" The officials largely pleaded for the princes' lives. After Grand Empress Dowager Feng fell silent, Emperor Xiaowen stated: "What the two princes committed is unpardonable, but the Grand Empress Dowager takes after the brotherly love that Gaozong [Emperor Wengcheng's temple name] had. Further, the Prince of Nan'an is filially pious toward his mother. Therefore, the two will be spared the death penalty, but their offices and titles will be stripped from them, and they will be reduced to commoner status with no political rights."

In 490, Grand Empress Dowager Feng died, and she was buried with magnificent honors. Emperor Xiaowen was so distraught that he was unable to take in food or water for five days, and subsequently observed a three-year mourning period for her, notwithstanding officials' pleas for him to shorten the mourning period in accordance with rules that Emperor Wen of Han had set.