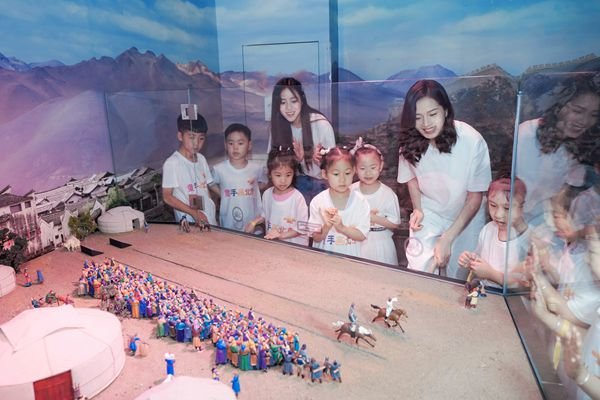 Young actresses Peng Yang and Wang Ziwei accompany children to tour around Little Big City Beijing and draw paintings with them together. [For chinadaily.com.cn]

Little Big City Beijing and Beijing-based nongovernmental organization Migrant Children's Foundation recently held the opening ceremony of a public-service program that encourages children to paint about Beijing in their own way.

Located on the historical Qianmen Street, Little Big City Beijing displays the city's culture and history since the Yuan Dynasty (1271-1368) with a miniature of different architecture and over 6,000 miniature mannequin from all walks of life.

In this summer, children will have the opportunity to win a free ticket to Little Big City with their paintings about Beijing.

On the Children's Day of June 1, people can upload their photos of making their fingers look like a heart shape on the event's official mobile web page. 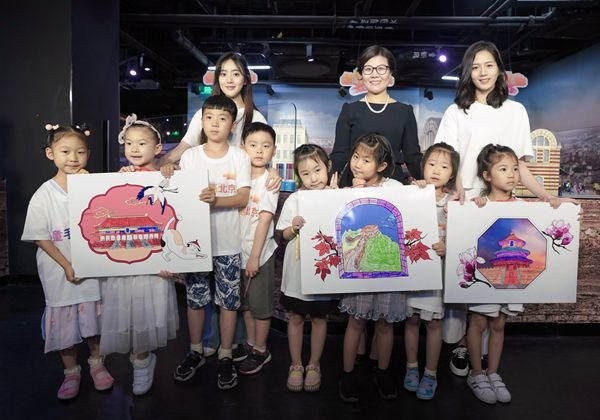 Children are displaying their paintings. [For chinadaily.com.cn]

Wang Rui, general manager of Little Big City Beijing, said it's like passing on one's love, and these photos full of love will be transformed into free tickets of the attraction to left-behind children. All those who post their photos can visit the attraction at a half price.

Young Chinese actresses Miao Miao, Peng Yang and Wang Ziwei were invited as the ambassadors of the program.

The three each drew a painting about Beijing, with elements like their families or the city's landmarks such as the Great Wall, the National Stadium and the National Swimming Center. The attraction made a miniature of the three paintings in a proportion of 1:24 and hung them on a mini wall of a miniature of architecture.

Peng Yang and Wang Ziwei attended the opening ceremony to accompany children tour around Little Big City Beijing and draw paintings with them together. 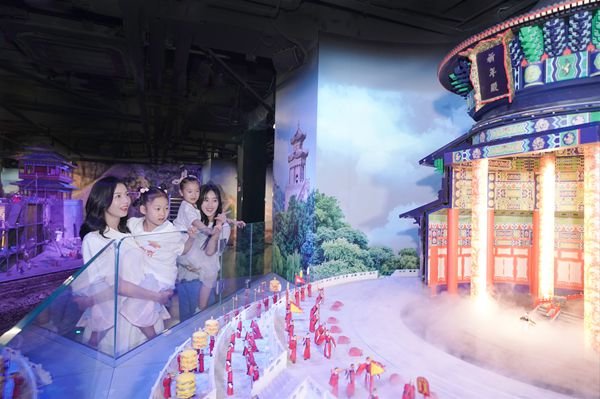 Young actresses Peng Yang and Wang Ziwei accompany children to tour around Little Big City Beijing and draw paintings with them together. [For chinadaily.com.cn]