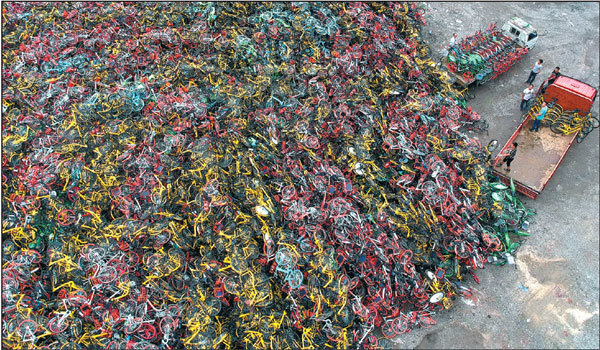 Trucks deliver impounded bikes to a storage facility in Shanghai after authorities had them removed from the city's streets. [Photo by Gao Erqiang/China Daily]

Beijing police have since the beginning of this year cracked down on nearly 30 cases involving the private possession of shared bicycles.

All suspects in the cases have been detained for five days, Beijing Evening News reported Friday.

In the capital's northeast Shunyi district, a man installed a private lock on a Mobike shared bike on Sunday. He was then detained by police and was in custody for five days.

The company said that punitive measures will be enforced for the private possession of shared bicycles, destroying vehicles and using cycles inappropriately.

Users found in violation may have their accounts suspended.

If users are involved in criminal acts, Mobike said the company will deliver the cases to law enforcement bodies.

The Beijing municipal government has since May 13 investigated and punished illegal behavior, such as the disorderly parking of shared vehicles.