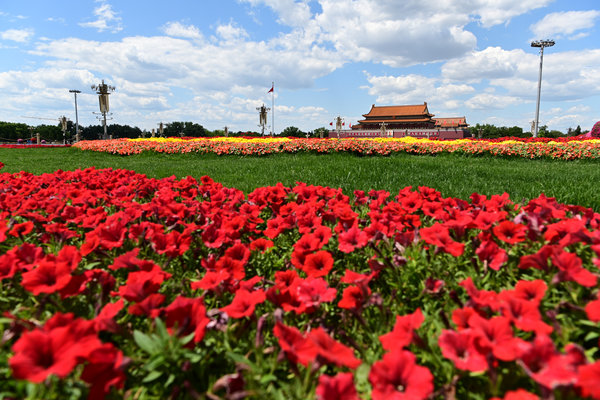 Photo taken on May 27, 2020 shows a view of the Tian'anmen Square in Beijing, capital of China. [Xinhua/Liu Jinhai]

BEIJING, May 29 (Xinhua) — Xi Jinping, general secretary of the Communist Party of China (CPC) Central Committee, has emphasized the full recognition of the significance of the promulgation and implementation of the country's newly adopted Civil Code and better protection of the people's legitimate rights and interests in accordance with law.

Xi made the remarks on Friday while presiding over a group study session of the Political Bureau of the CPC Central Committee on the effective implementation of the Civil Code.

Xi demanded the whole Party effectively promote the implementation of the Civil Code in order to better advance law-based governance of the country and the building of a socialist country based on the rule of law, and better protect the people's rights and interests.

Noting that the Civil Code is the first law to carry the title "code" since New China was founded in 1949, Xi said it marks a major achievement of the country in developing socialist rule of law in the new era. Photo taken on May 22, 2020 shows flags on the Tian'anmen Square and atop the Great Hall of the People in Beijing, capital of China. [Xinhua/Xing Guangli]

Party and state organs at all levels should take into account the stipulations of the Civil Code while carrying out relevant work, without violating the legitimate civil rights enjoyed by the public, including personal rights and property rights, Xi added.

Relevant state departments should step up the institutional building of laws and regulations related to the Civil Code, Xi said, noting that the Civil Code should serve as an important scale plate for administrative decision-making, management and supervision.

Xi also stressed the strengthening of work in civil trials and supervision and guidance in key areas that involve the protection of property rights, personality rights, intellectual property rights and ecological and environmental protection.

Highlighting the importance of giving full play to the roles of legal organizations and professionals, including law firms and lawyers, Xi also called for the incorporation of the Civil Code into the national education system.

The Civil Code, long expected in the country, was adopted on Thursday at the third session of the 13th National People's Congress, the top legislative body of China.